Kim Jong Un is facing difficulties on various fronts, both at home and abroad.

North Korean leader Kim Jong Un is convening a key ruling party body on Wednesday for the first time in eight months to address a “crucial” mystery issue. He’s got plenty of tricky situations to choose from.

The state’s official Korean Central News Agency offered few clues about the gathering of the Central Committee, saying it will “discuss and decide on an issue of crucial significance in developing the Korean revolution and increasing the fighting efficiency of the Party.” It didn’t elaborate.

Kim is facing difficulties on various fronts, both at home and abroad. Floods have wiped out farmland to deal another blow to the virus-hit economy, while a reported health scare earlier this year raised questions about succession. His nuclear discussions with President Donald Trump have also ground to a halt without him winning any sanctions relief, and the U.S. and South Korea this week kicked off joint military drills.

“The unusual succession of party meetings in recent months — and possibly even the lack of much North Korean activity on the foreign policy front of late, for example weapons testing — suggest the quarantine measures and the global pandemic have had serious ramifications for the economy and the people’s living standards,” said Rachel Minyoung Lee, a former U.S. government analyst specializing in North Korea.

North Korea has boasted that it doesn’t have any confirmed cases of Covid-19, a claim doubted by U.S. and Japanese officials. The virus brings large risk to the impoverished state, whose antiquated medical systems could be overwhelmed by a large outbreak.

The meeting will be the first time the Central Committee has convened since a four-day marathon session in late December, when Kim called for a “frontal breakthrough” to build up the economy and state security. He also warned Trump that North Korea was no longer bound by his pledge to stop major missile tests.

Key party meetings often lead to a shake up of cadres, which could mean new powers for his prominent sister Kim Yo Jong and a purge of those seen as falling down on the virus or the economy. At a politburo meeting last week, Kim sacked the premier he appointed a little more than a year ago, removed the southern border city of Kaesong from virus lockdown and said he would not accept foreign food aid because of the risk posed by the pandemic.

North Korea has been hit by flooding since earlier this month. It has also impacted its Yongbyon nuclear facility, with waters reaching pump houses for mothballed reactors, the 38 North website said based on an analysis of satellite imagery.

Kim needs to urge his officials to help boost the economy before the 75th anniversary of the ruling Workers’ Party on October 10, said Yang Moo-jin, a professor at the University of North Korean Studies in Seoul who has advised the South Korean government over the years. Kim has promised to make great achievements at home to honor the spirit of the revolution, such as opening a huge new hospital in Pyongyang.

“Kim may reshuffle his bureaucrats during the meeting in a bid to speed up the restoration of damages by the recent flood and Covid-19 before the October 10,” Yang said. “The meeting is likely to emphasize issues surrounding internal politics, mainly economy.”

Kim’s decision to oust Kim Jae Ryong as premier could help deflect blame for any hardships instigated by a poor harvest. The country’s economy was already under pressure from his decision to shut borders in January due to the coronavirus, which slammed the brakes on North Korea’s minuscule legal trade. This year, it could send the economy into its biggest contraction since 1997, according to Fitch Solutions. 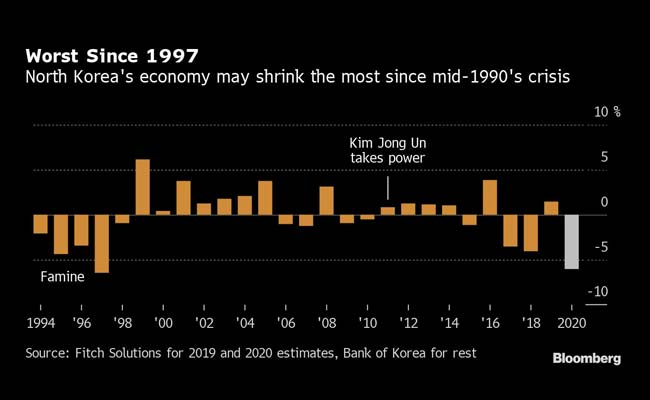 Agricultural production is a key element of the economy, putting strain on Kim as he battles global sanctions put in place to punish the country for its nuclear and ballistic missile testing. The United Nations World Food Program, which has operations in North Korea, has said about 40% of the population is undernourished.

A weaker economy could decrease Kim’s leverage in nuclear negotiations that started with Trump in 2018, making it more difficult for him to achieve the sanctions relief he wanted in exchange for scaling back his nuclear weapons program. With the U.S presidential election coming up, Kim may be playing a waiting game, churning out fissile material and missiles that make his regime more of a threat for whoever wins.

The announcement of another meeting came on the same day the U.S. and South Korea began a set of joint military drills, scaled down due to the virus. North Korea so far hasn’t unleashed its typical torrent of rhetoric denouncing joint drills as a prelude to nuclear war.

“North Korea’s reticence on the drills thus far tracks with a drop in North Korea’s commentary and statements on foreign policy writ large since late last year,” said Lee, the former U.S. analyst. “The main reason seems to be that North Korea needs to focus on domestic issues for now.”

(Except for the headline, this story has not been edited by NDTV staff and is published from a syndicated feed.)

Times of india4 mins ago The Taste with Vir: In times when hate sells, how will News TV regulation work?