HomeLifestyleIndians love chicken tikka masala, the made-in-Britain curry. What about katsu curry from Tokyo and buss up shut from Trinidad and Tobago?
Lifestyle

Indians love chicken tikka masala, the made-in-Britain curry. What about katsu curry from Tokyo and buss up shut from Trinidad and Tobago? “We’re taking you to an Indian restaurant!” As a frequent traveller to foreign shores, this is one sentence that is thrown at me with alarming alacrity and frequency. It is also the one that I dread hearing the most.

I hear it from friends I’m visiting. I hear it from relatives whose homes I’m crashing at. I hear it from business associates I’m meeting with. Everybody automatically assumes, that I, as a food and travel writer, must miss and love Indian food. So much, that I need to be force-fed some the minute I deplane.

While they seem to have gotten the ‘love’ part spot on, the ‘miss’ bit is pushing it. I mean, why would I be excited to eat ersatz, localised versions of some of Indian cuisine’s greatest hits, when I get to relish the infinitely better-executed originals back home? Please spare me those gloopy, sweet ‘chicken’  vindaloos (it’s always pork in the spicy-sour Goan original) and those milder, spinach leaf-substituted ‘ sarson’ da saags.

But this is not to say that I don’t look forward to trying the various Indian-inspired, though thoroughly indigenous preparations — local dishes with often shaky Indian underpinnings and vaguely  desi flavours. Scotland-based Ali Ahmed Aslam is said to have created chicken  tikka masala. As the UK’s de facto national dish with nothing to do with traditional Indian cuisine, it was created by Aslam in the early 70s at Shish Mahal,
| Photo Credit:
Courtesy Twitter.com

The recent passing of Scotland-based Pakistani restaurateur Ali Ahmed Aslam has thrust the spotlight back on the oft-debated chicken  tikka masala. As the UK’s de facto national dish with nothing to do with traditional Indian cuisine, it was created by Aslam in the early 70s at Shish Mahal, his (then) modest little curry house in Glasgow, Scotland. He came up with it by adding a creamy, tomato-based sauce to a couple of  tandoori chicken  tikka pieces that a diner complained were too dry and mealy.

While on the topic of curry, whenever I find myself in Japan, I cannot resist the lure of a well-made  katsukarē also known as katsu curry. It is made up of a pork cutlet called  tonkatsu that is served with a portion of Japanese rice and coated with a mild, sweetish-tasting thick curry sauce. I soon learned that curry was introduced to Japan in the late 18th century when the Indian subcontinent was under colonial rule by the British Empire. However, it wasn’t until the early 20th century, when curry was co-opted by the Japanese Navy and Army to feed the troops, that the dish began to become popular with regular Japanese folk. 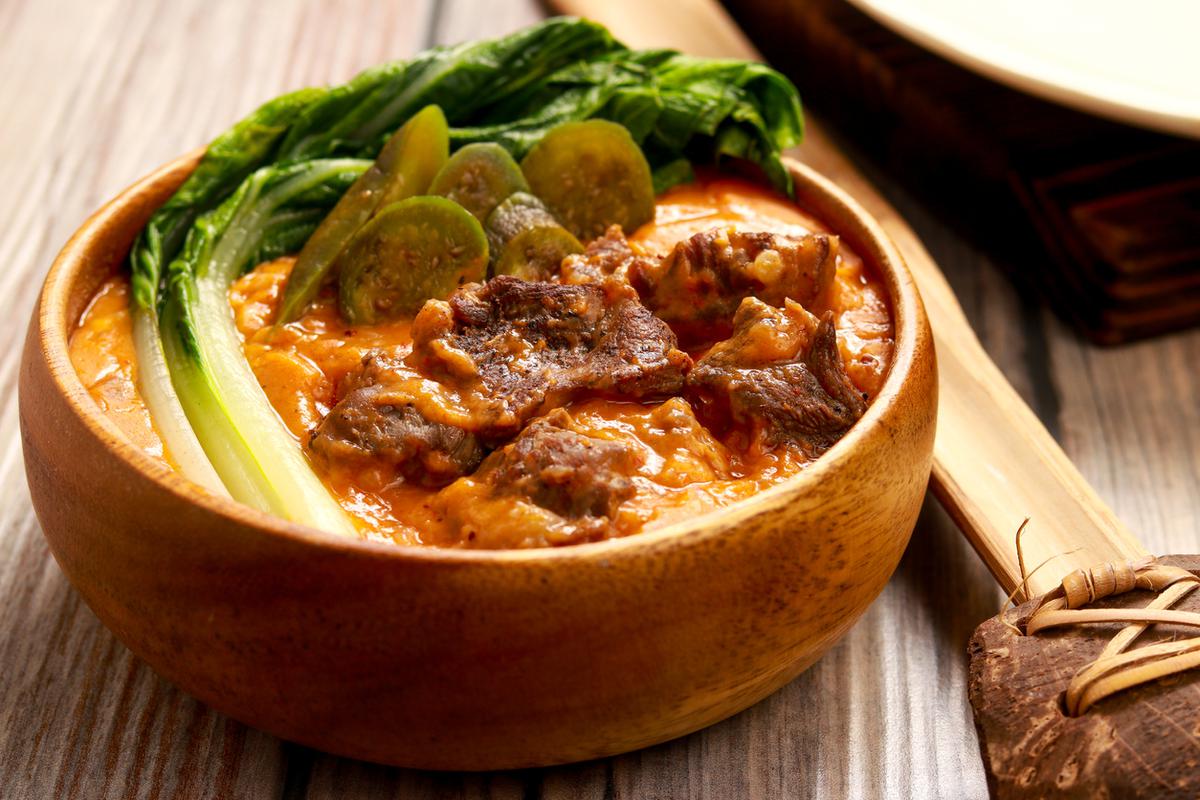 The popular oxtail and peanut sauce dish of  kare-kare in the Philippines is an homage to the Indian curry.
| Photo Credit:
Getty Images/ iStock

Interestingly, the curry-military connection is also something I recently came across when visiting The Philippines. The fiendishly popular oxtail and peanut sauce dish of  kare-kare is another homage to our very own curry. It is believed that homesick Indian sepoys from Southern India that settled in The Philippines during the British occupation of Manila improvised their own cuisine with available materials. They first called the dish  kari-kaari that has now morphed into  kare-kare. And guess what it is always served with? A tangy fruit and vegetable pickle simply called  atchara!

And just like the spice-bereft  atchara, another iteration of the fruit-veggie pickle exits in the island of Mauritius that’s known for its sizeable Indian origin demographic. Called  atchar, it is the perfect condiment to add to a serving of  dholl puri. Known as the national street food of Mauritius and akin to a savoury version of the Maharashtrian sweet  puran poli (and nothing like the North Indian  dal puri), this pancake-style flatbread of allegedly Bihari origins comes stuffed with cooked yellow split peas which have been blended and seasoned with turmeric and cumin. An ubiquitous, on-the-go kind of snack, one can find it for purchase on almost every street corner. It is always served in pairs, and rolled up with bean curry,  atchar and various  chutneys. A sweet counterpart of the  dholl puri is also used to scoop up the Mauritian version of  kheer. Doubles, which resembles India’s chole bhature, is a breakfast staple all over Trinidad and Tobago in the Caribbean.
| Photo Credit:
Edmund Gall/ flickr.com

Also served in pairs and hence it’s name, ‘doubles’ is a breakfast staple all over the twin island nation of Trinidad and Tobago in the Caribbean. Consisting of two small pieces of flat fried dough called  baras that are filled with curried chickpeas, the serving is topped with tamarind  chutney and a super-hot sauce made from Caribbean scotch bonnet peppers. The dish — which I felt was quite like our very own  chole bhature — was first created in Fairfield, Princes Town by Emamool Deen and his wife Rasulan in 1936. Interestingly, the name ‘doubles’ originated in 1937 when Deen’s customers insisted he make their order of the irresistible treat a “double” one.

There exists another Indian-inspired dish with a rather wacky name and analogy in Trinidad and Tobago. An iteration of our very own Malabar  porotta, the  buss up shut is a flaky  paratha that is smashed up by the cook using their hands after frying on a griddle. Thus, leaving the flatbread to resemble a torn-up or “busted up shirt”. The ribbon-like bits of which I was made to dunk into spicy chickpea and potato curry and eat with Trini-style mango…well, there we go again,  achaar!

The Mumbai-based writer and restaurant reviewer is passionate about food, travel and luxury, not necessarily in that order.