HomeentertainmentGolden Globes 2023: ‘The Fabelmans,’ ‘The White Lotus,’ ‘House of the Dragon’ triumph
entertainment

Golden Globes 2023: ‘The Fabelmans,’ ‘The White Lotus,’ ‘House of the Dragon’ triumph The Globes’ would-be comeback ended like many Globes ceremonies before it: with a triumphant Spielberg. For the fifth time, one of Spielberg’s films won a best picture Globe. Nominated 14 times by the Globes for best director, Spielberg also won the honor for the third time. He began by thanking his three sisters, his late father and his late mother, Leah Adler ( played by Michelle Williams in the film). “She is up there kvelling about this right now,” said Spielberg.

Carmichael kicked off the 80th Golden Globes from the Beverly Hilton in Beverly Hills, California, with little of the fanfare that usually opens such ceremonies. He plunged straight into the issues that drove the Globes off television and led much of the entertainment industry to boycott the Hollywood Foreign Press Association after the group was revealed to have no Black members. Carmichael opened by asking the crowd to “be a little quiet here.”

“I am your host, Jerrod Carmichael,” said the “Rothaniel” comedian. “And I’ll tell you why I’m here. I’m here ’cause I’m Black.

“I won’t say they were a racist organization,” he continued before sitting on the stage. “But they didn’t have a single Black member until George Floyd died. So do with that information what you will.”

McDonagh’s “The Banshees of Inisherin” left with three awards, including best screenplay for McDonagh and best actor in a comedy for Colin Farrrell. Fourteen years earlier, Farrell won a Globe for McDonagh’s “In Bruges,” which likewise paired him with Brendan Gleeson. In his remarks, Farrell thanked the playwright, his castmates, his kids and the film’s donkey, Jenny.

On a soggy night following punishing, prolonged rains that have lashed Southern California, the first award went to Ke Huy Quan, the former child star of “Indiana Jones and the Temple of Doom,” for best supporting actor in “Everything Everywhere All at Once.” A clearly emotional Quan, who had left acting years before directors Daniel Kwan and Daniel Scheinert cast him in their multiverse tale, thanked them for his second act.

“More than 30 years later, two guys thought of me,” said Quan. “They remembered that kid. And they gave me the opportunity to try again.”

Michelle Yeoh, the star of “Everything Everywhere At Once,” also won, for best actress in a comedy or musical. The Malaysian-born Yeoh was just the second female actor of Asian descent to win in the category, after her “Crazy Rich Asian” costar Awkwafina, who won for “The Farewell” in 2020. “Forty years,” the 60-year-old Yeoh said. “Not letting go of this.” Michelle Yeoh poses in the press room with the award for best performance by an actress in a motion picture, musical or comedy for ‘Everything Everywhere All at Once’ at the 80th annual Golden Globe Awards
| Photo Credit:
Chris Pizzello

Possibly Yeoh’s stiffest competition at the Academy Awards, Cate Blanchett of “Tár,” won best actress on the drama side. Blanchett, in production, wasn’t in attendance to pick up her fourth Globe. (Also absent was Kevin Costner, best-actor winner in a drama series for “Yellowstone.” Presenter Regina Hall said he was sheltering in place in Santa Barbara due to flooding.)

“Weeping may come in the evening, but joy comes in the morning,” Bassett said, referencing the loss of “Black Panther” star Chadwick Boseman.

Best actor was an upset. Austin Butler won for his performance in Baz Luhrmann’s “Elvis.” The favorite in the category has arguably been Brendan Fraser for “The Whale.” Ahead of the Globes, Fraser said he would not attend because “my mother didn’t raise a hypocrite.” In 2018, Fraser said he was groped in 2003 by longtime HFPA member Philip Berk. Berk, who is no longer an HFPA member, denied it.

Mike White’s “The White Lotus” won for best limited or anthology series. Fresh off her dramatic finale, Jennifer Coolidge gave one of the night’s lengthiest and warmest speeches while accepting the best supporting actress in a limited series award.

“Even if this is the end, you sort of changed my life in a million different ways,” Coolidge told White. “My neighbors are speaking to me, things like that.” 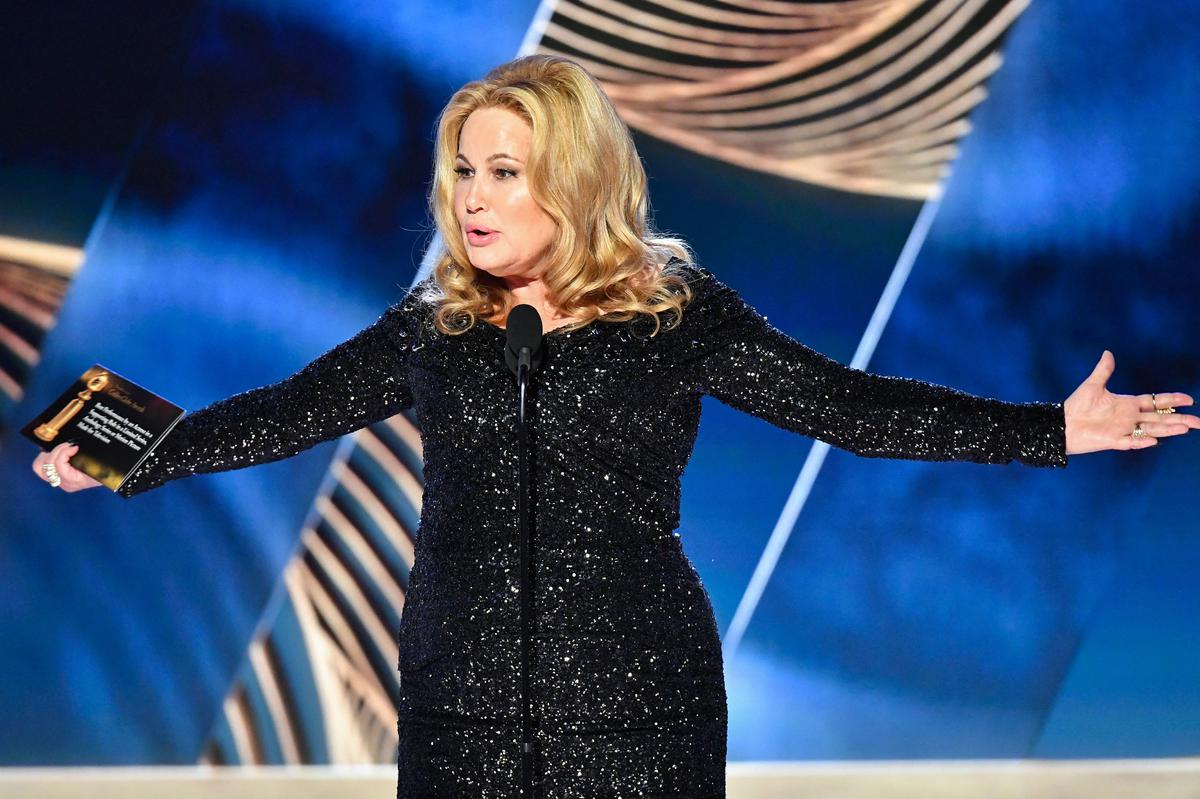 “It has resonated with the world in a way that I couldn’t even have imagined it would have,” said Brunson as she thanked the studios that backed her vision. “But let’s be real. I did imagine it. That’s why I sold it to you.” Best drama series went to “Game of Thrones” prequel “House of the Dragon.”

“Naatu Naatu” from the Telugu sensation “RRR, ” won best song over the likes of Rihanna and Taylor Swift.

The Globes were plunged into chaos shortly before a largely remote pandemic 2021 awards show when a Los Angeles Times report revealed that the HFPA, then numbering 87 members, had no Black members.

Tom Cruise, whose “Top Gun: Maverick” was nominated for best picture, drama, famously returned his three Golden Globe awards after the HFPA revelations. Mid-show Tuesday, Carmichael came out with three trophies he said he found backstage, and suggested they be traded for Shelly Miscavige, the wife of the leader of the Church of Scientology.

The HFPA pledged to reform, diversified its membership and changed some of the ways it operates. It now has 96 members, including six Black members, along with 103 nonmember voters. Billionaire Todd Boehly purchased the Globes and has begun turning the nonprofit group into a for-profit company.

Reaction to the Globe nominations last month was muted. But much of the industry turned out Tuesday. Eddie Murphy and Ryan Murphy received tributes. Sean Penn introduced a message from Ukraine’s President Volodymyr Zelenskyy. “There will be no third World War,” Zelenskyy said in a taped message, predicting Russia’s defeat. “It is not a trilogy.”

When the Globes were on the brink, NBC reworked its Globes deal into a one-year contract and moved the show from Sunday to Tuesday. That meant the Globes were essentially put on a one-year audition to recapture its awards-season perch.

As it has for most award shows, Globes viewership has cratered. After 18.4 million watched the 2020 awards, the 2021 edition managed just 6.9 million, according to Nielsen. Still, the Globes remain a valuable marketing tool for awards contenders, propping up ads for films in the long stretch between the holidays and the Oscars, which air March 12, a year after “the slap.”

Accepting the Cecil B. DeMille Award, Eddie Murphy said he knew the blueprint for longevity in show business: “Pay your taxes, mind your business, and keep Will Smith’s wife’s name out of your (expletive) mouth!” Telangana Budget: A difficult task striking a balance between a feeble flow of funds, election-year sops