HomeLifestyleKick off dry January with a zero alcohol spirit
Lifestyle

Kick off dry January with a zero alcohol spirit 
After the excesses of December comes Dry January. If you have decided to give up alcohol, or even just take a pause, it is easier this year than ever before as bars and mixologists experiment with zero-alcohol drinks. While the Dry January challenge, which started in the west around 2013-14, has gained traction, with a lot of help from social media, there has been a growing demand for healthier alternatives on menus at bars and restaurants over the past few years.

Demand meets supply: hence a steady stream of zero-alcohol spirits has launched in India over the past year. These mimic spirits like gin, whiskey and tequila enabling you to still meet friends at the bar without worrying about battling a hangover the next day.

While zero-alcohol spirits are engineered to be an alternative to traditional spirits, they are a world away from the cloyingly sweet mocktails of the past (cue the cliched Shirley Temple, bright with grenadine syrup). They are also not to be confused with more contemporary alternatives, like flavoured sodas and artisanal tonic water, as they are the base of the drink, and not mixers. 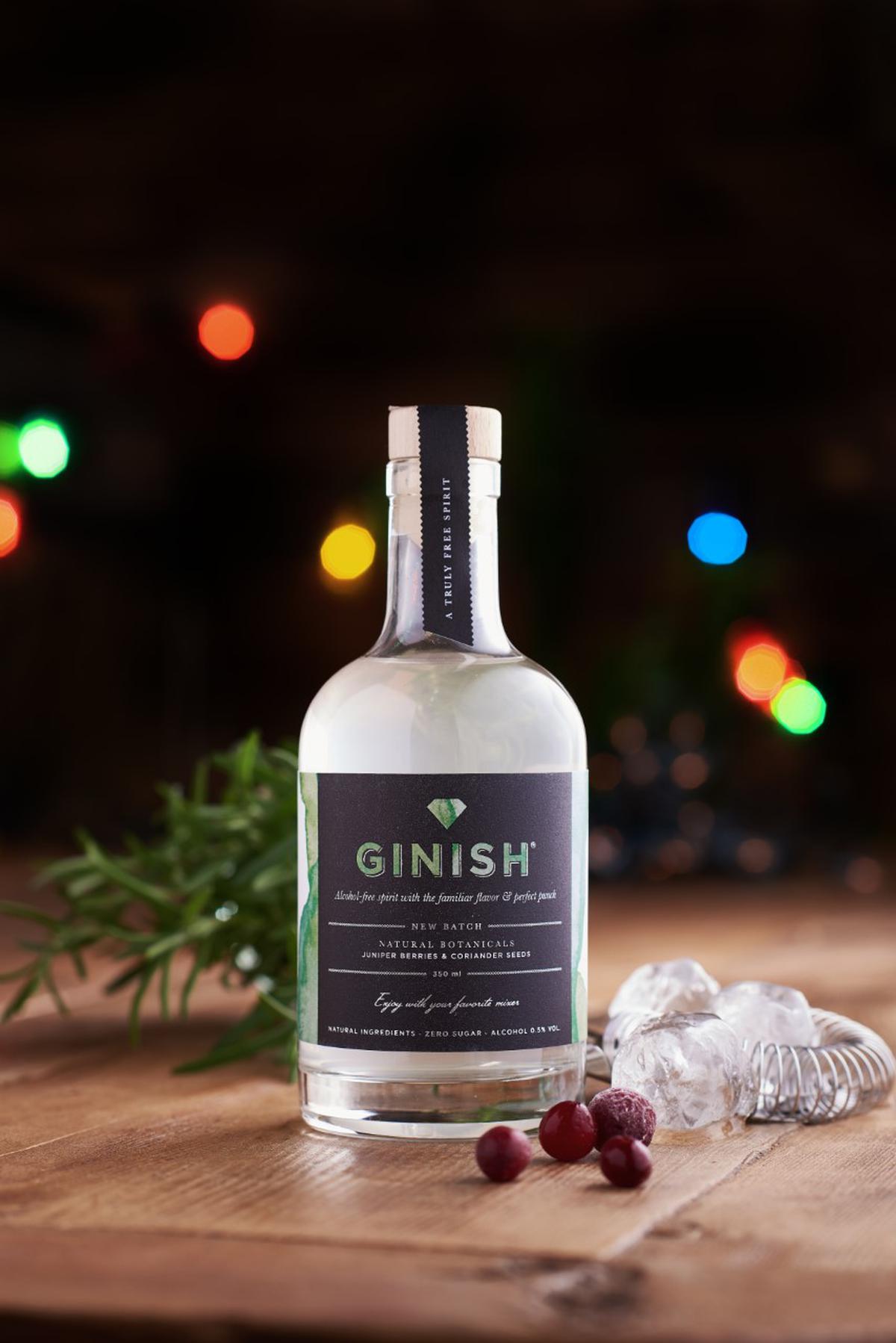 In India, more hotels, including the Park Hyatt, Taj Palace and Four Seasons have started to stock Indian made zero alcohol options such as GinISH (priced at ₹1760 approximately) and RumISH (from Zero Percent), Seedlip and Sober. These are also available in select wine stores across the country. A peek at the process

Most often, these beverages are made following the same processes as alcoholic spirits, except that at the end, the alcohol is eliminated. Australia-based Ramakrishna Prasad Akkala, founder of RIPPR, which mimics wine and beer, explains how the drink was a lockdown experiment in his distillery warehouse in Australia.

“A combination of a small amount of neutral spirit and botanicals gives the spirit its floral, fruity or bittersweet flavour. Then, this is heated through rounds of distillation which extracts the flavour of the ingredients before the alcohol is removed from the liquid. This can take up to six weeks to complete. The response have been very good as low to no alcohol spirts have a close to 21% market demand,” Ramakrishna adds

The concept is quickly catching on in India. According to the International Wines and Spirits Record (IWSR) — a leading source of data, analysis and insights on the global alcoholic beverage market — the trend for ‘interesting, alcohol-free spirits shows no sign of slowing down, with consumption of no and low spirits expected to increase 31% by 2024.’

Vikram Achanta, the co-founder of 30 Best Bars India — a platform that ranks and celebrates the country’s best bars and bartenders — says alcohol-free spirits are an interesting category and brands are making big efforts to cash in on this latest demand.

“The Waitrose Food and Drink report, October 2021 stated that searches for alcohol-free drinks continue to increase by 22% every year. Brands have been keeping pace with new trends by launching or expanding existing product lines,” he states. “In retail, the scope is huge which is why Jacob’s Creek introduced two variants of red and white wine in the Indian market,” says Vikram, adding that Sober has introduced a non-alcoholic gin.

How does it measure up to the real thing? Well, it’s work in progress. “I feel, Sober still needs some fine-tuning in the recipe,” he says, explaining that the brand needs to work on the play of botanicals and spices. He, however, says with the concept of a cocktail bar culture still being new in India, this new addition will take a little time to become popular. Nevertheless, Grandview Research, (an Indian and US-based) market research and consulting company, reported the global non-alcoholic beverages market size in 2021 to be valued at $833.1 billion and expanding. Bacardi Cocktail Trends Report (January 2022), in partnership with The Future Laboratory, says approximately 58% of consumers globally are shifting to non-alcoholic and low Alco Beverage (ABV) cocktails and beverages.

Based on the analysis and customer feedback, Copitas at the Four Seasons hotel in Bengaluru, which prides itself on being on Asia’s 50 best bars list works on keeping ahead of trends. The team is now creating a new menu, which includes cocktails made with alcohol-free spirits.

Bar manager Sarath Nair says they have been using Seedlip to make cocktails that taste like gin, but without alcohol. These have been particularly popular with conscious drinkers, who want low-sugar drinks made with fresh juices and no alcohol. (They are also a great option for the night’s designated driver.)

Delhi-based sommelier Magandeep Singh explains how these drinks are formulated for people who want to give up, or cut back on alcohol, not teetotallers. He says “Go for a drink with any zero alcohol spirit if you are the designated driver or taking antibiotics and don’t want to miss the taste of alcohol. Drinks made from zero alcohol spirit or say a zero spirit beer or wine are not meant for those who never taste alcohol.”

Explaining why customers are picking these alternatives over mocktails, Jezan Limzerwala, assistant director of F&B and Beverage Head at The Taj Mahal Palace, Mumbai says they make it possible for drinkers to have an authentic “gin and tonic or rum and Coke experience”.

Jezan adds, “The natural taste and balance from the spirits make them a great expression closest to what the original drink would taste like.” Besides, for drinkers who crave familiarity, these no-spirits make it possible to enjoy a night of these familiar drinks, without repercussions, bad decisions or a series of embarassing drunken karaoke reels.

Ramakrishna also points out that non-alcoholic spirits were first introduced in the US to help people fight alcohol addiction.

Rohit Kasare, India head of marketing at Zero Percent (launched a little before the lockdown in 2020) says, “The mocktail scene in India is outdated with the same mocktails being worked upon and offered. Non-alcoholic spirits break that monotony.” When you a sip a drink made with Ginish, you will be less likely to miss the gin thanks to the presence of familiar botanicals like vanilla or juniper.

Rohit adds, however, that he says the market is taking time to adapt to these drinks as they are are still a novelty, and only beginning to appear on bar menus. Yangdup Lama of the popular Sidecar bar in Delhi, known for its meticulously crafted cocktails, agrees that the market for such spirits in India is still at a nascent stage. “It is a complex market and just because the alcohol content is missing from a spirit it might not be a good enough reason to coax regulars to make the switch,” he says. Taste therefore is key, but with competition getting fiercer, products will inevitably keep improving

Which brings us to the next big challenge: the cost. Though it comes without the spirit, the method of preparation is similar to alcoholic beverages, so no alcohol drinks tend to be on a par or even slightly steeper with their heady counterparts.

This is why growth in India is relatively sluggish despite the potential, says Pankaj Balachandran, founder, Countertop India and brand director of Short Story Spirits (drink menu consultants).

“With the Indian market still price sensitive, no alcohol drinks have not gathered desired speed. The same spirits at a consumer sensitive market like Dubai however gathered momentum the moment it was on the menu,” says Pankaj, adding that he recently created negronis and mojitos for Jun’s Dubai, a progressive Asian Fine dining restaurant by Chef Kelvin Cheung. “I used zero-alcohol whisky, tequila and rum and the uptake was high.”

Evidently, the ‘healthy’ bar menu is just getting started: Bira launched a low cal beer. Welcome to 2023, where you can party on Saturday night, then go for a run on Sunday morning. After all, hangovers are so 2022.