The Tuesday mass is on at Puliakulam’s St Antony’s Church in Coimbatore. The road outside is gradually filling up: vendors selling portraits and lockets of Christ, toys, stickers, bangles, and handbags, have started to arrive. It is close to noon, and they are opening out their ware to be displayed on the road leading to the church. As the day progresses, the stretch changes beyond recognition. By 5pm, there are vendors on either side, and the vegetable market at the farthest end adds to the atmosphere. Puliakulam’s weekly Tuesday sandhai (market) is well-known. Now that Christmas is here, the market wears a festive spirit.

Shops selling stationery and accessories in the neighbourhood are overflowing with stars. “The first thing that announces the arrival of Christmas, are the stars,” says A Paul Raj, whose house is located right outside the church. The 77-year-old is among the neighbourhood’s oldest residents. “My mother was the first one to start a petty shop here,” he recalls. “She sold little things people picked up on their way to offer prayers at the church.” Paul Raj says that the church is over 250 years old. “It gained popularity over the past 150 years,” he says, narrating the story of its beginning. “I have heard that a lady in the area owned a small statue of St Antony, that she prayed to at home. She eventually gave it away to be placed in its present shrine, and the church was built around it.” 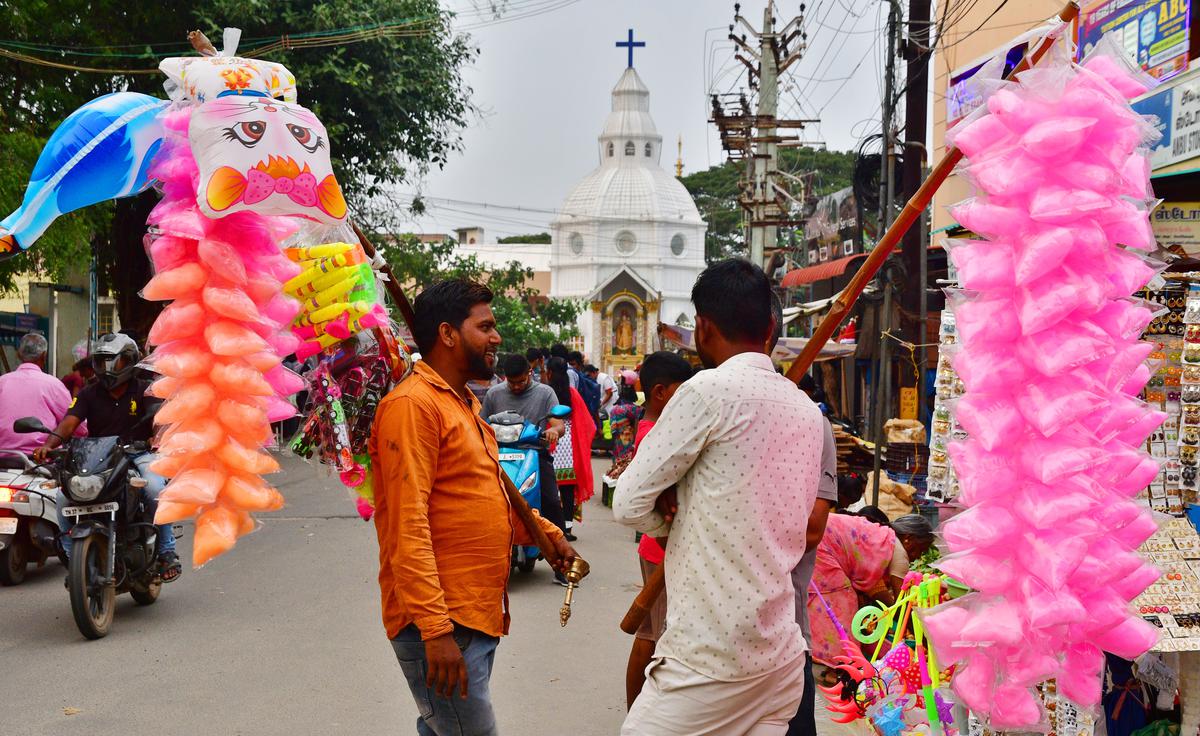 There is camaraderie as they exchange notes on their families over tea from a seller who balances a flask on cycle
| Photo Credit:
PERIASAMY M

He has happy memories of Christmas during his younger days. “People would deck up vans and buses with tinsel and lights and would arrive at the church, singing all through their journey,” he recalls. Today, though, a lot has changed. But the core remains.

Most vendors here have been coming for years. There is camaraderie as they exchange notes on their families over tea from a seller who balances a flask on cycle. A Gurusamy sells portraits of Jesus and rosaries, that he sources from Puducherry and Velankanni. “I make around 10 trips on train every year to buy products to sell,” he explains, adding that 10 days before Christmas, he adds stars and Santa caps to his collection.

Nearby, Mohammad Gani has displayed quirky keychains and wooden toys. “I’ve been selling at the Tuesday market since 1997,” says the 59-year-old. “My stall was much bigger then; I sold a range of plasticware.” Setting up the stall alone takes him over an hour. “Now that I’m old, I’ve decided to keep it small,” he adds. A jet-black lamb threatens to eat S Rizvana’s Christmas stars. She shoos it away, but it soon comes back with a bigger goat to try its luck again. “They are drawn to the smell of the flour that is used as an adhesive for the paper stars,” she chuckles. She and her husband own a small gift shop in Puliakulam, and every year in December, she displays over a hundred stars in a set up on the main road.

S Vincy too sells stars and lights at a makeshift stall behind the church. She sources the stars from Ernakulam in Kerala, and has seen their evolution over the years. “From simple paper stars, to colourful plastic ones, I now sell LED stars that come in various sizes,“ he says.

Anthony Das and his family live right outside the main entrance of the church. They own two flower shops, and also sell candles and stars during the festive season. “It’s been 50 years since we set up our shops,” says Anthony, as he strings a tuberose garland. “You should come here on Christmas eve,” his wife Florence Chitra tells us. “The entire neighbourhood will come together to create a grand nativity scene, complete with Santa and snow.” Most vendors at the Tuesday market will be present on Christmas as well
| Photo Credit:
PERIASAMY M

Most vendors at the Tuesday market will be present on Christmas as well. Gurusamy never takes a break. “I do attend the early morning mass on December 25. But I rush back to my shop. My customers will be waiting. Work is more important. I’m sure he understands,” he says, pointing to the church.