HomeentertainmentThe best and worst of Bollywood in 2022: How Hindi cinema fared post the pandemic
entertainment

The best and worst of Bollywood in 2022: How Hindi cinema fared post the pandemic 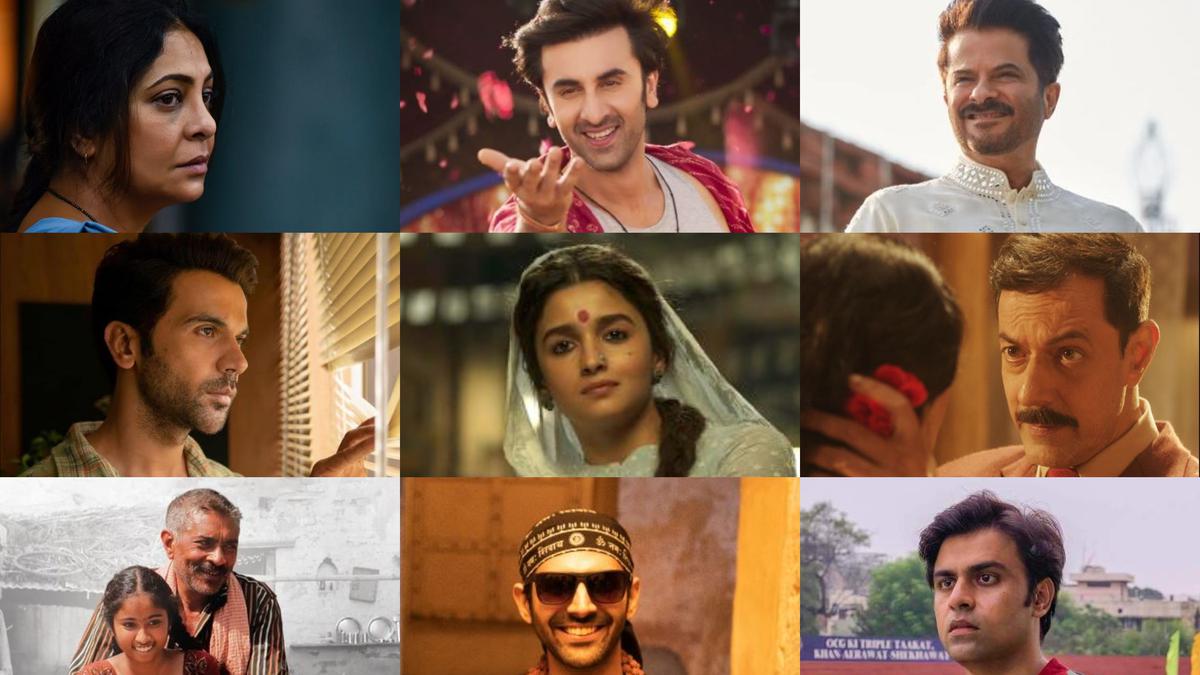 
Towards the end of 2021, when one reached Delite Diamond — a single-screen theatre at the cusp of Old Delhi — to watch the press show of Ranveer Singh’s much-awaited  83, a flummoxed usher asked the critics to wait because the previous show was houseful. As COVID-19 was very much around, one got curious as to what made the public shed fear in this part of the world. Moments later, a sea of smitten audience emerged; they couldn’t pronounce ‘Allu Arjun’, but they definitely knew the difference between the flower they had been sold and the fire that had just engulfed them.

Revelling in the southern spice

It has its share of flaws, but the mass appeal of the southern masala enveloped the Hindi film industry in 2022. The dubbed versions of RRR, Ponniyin Selvan: I, Radhe Shyam, KGF: Chapter 2, and  Kantara outscored the original Hindi film content. By the end of the year, big hoardings of  Kantara could be seen pasted across towns of Uttar Pradesh where people hardly worship the Varaha avatar of Vishnu.

A still from Kannada film ‘Kantara’

Veteran film critic Ajay Brahmatmaj says the immersive use of VFX in southern films makes the storytelling impactful. He, however, cautions that the success of regressive themes at the box-office, in the name of promotion of culture, is challenging Hindi filmmakers to return to a regressive curve that they have already negotiated.

The side effects of the pandemic could be seen in the content consumption of the audience. The issue-based, woke films that were doing well before the pandemic are now giving diminishing returns at the box-office. After the high dose of dark themes on streaming platforms during the lockdown, the audience seem keen to watch fantasy, mythology, and humour in communal viewing. So, the biggest box-officer earner was Brahmastra whose ‘Indian mythology meets Marvel Comics’ theme raked in the moolah despite obvious flaws in the writing. The humour in the horror of Bhool Bhulaiyaa 2 and Bhediya worked with an audience keen to look at the lighter side of a passing danger. Ranbir Kapoor and Alia Bhatt in ‘Brahmāstra: Part One – Shiva’

Buying a cinema ticket has become a luxury after the pandemic. Reports suggest that Rajshri Films tried to negotiate with multiplex chains before the release of Uunchai but Yashraj Films, which distributed the film, was pointedly asked if it would cut down the ticket rates at the time of the release of Pathaan. Director Aanand Rai also mulled over reducing the ticket price for Raksha Bandhan because the subject of the film suited single-screen theatres and multiplexes in non-metro cities. He says the producers felt reducing the ticket price of a film headlined by a big star unilaterally could be seen as a sign of weak content. However, when the producers of Chup: Revenge of the Artist reduced the ticket price for four days, it worked.

Art of an essayist

The storytelling, however, remained a big worry throughout the year with even Yash Raj Films seemingly losing the plot and Dharma Productions playing it a little too safe. The screenwriters are either churning out essays on contemporary issues or, in a bid to reach out to a global audience, making the idea so convoluted that it loses connection with the native audience. The screenplays are often populated with progressive but stock characters; traditional mother on Tinder or a police officer in a same-sex relationship no longer evokes interest by their mere presence.

Of course, there were glorious exceptions. Vasan Bala and Suresh Triveni showed how a film could raise significant contemporary issues and remain entertaining and engaging at the same time in their rich exposition of ideas in Monica, O My Darling and Jalsa respectively . In Gangubai Kathiawadi, Sanjay Leela Bhansali delivered  a classic old-school Hindi film that worked in 2022.  Gangubai,  Monica… and Qala had evocative soundtracks that could be heard on loop, making the cinematic experience all the more riveting. A still from ‘Monica O My Darling’

Known for subversion, Rajat Kapoor once again delivered a fantastic meta-caper with RK/Rkay that raised some existential issues. M Gani made a keenly observed socio-political document from an Indian village in Matto Ki Saikil, and Amar Kaushik and Anirudh Iyer slipped in important messages on the environment, casual racism, tribal rights, privacy, and social media into mass entertainers like  Bhediya and An Action Hero. Not to forget the small-town innocence of Jaadugar and Janhit Mein Jaari. A highlight of writing in these films was that the dialogues were imbued with the nuances of Hindi, Urdu, and local dialects, making popular cinema less generic.

However, originality is still hard to sell and big producers are still investing in remakes. Laal Singh Chaddha and Jersey may not have lived up to expectations, but the success of Drishyam 2 and Vikram Vedha, and the critical acclaim for Dobaara and Blurr prove that well-made remakes can work even in times of globalisation of cinema.

Veteran producer Boney Kapoor said filmmakers are keen on global outreach when they could not satisfy the local audience. Kapoor also questioned big actors for completing films in 25 to 30 days after charging full fees and described their creative process as dishonest. Perhaps, he was referring to Akshay Kumar who headlined five films this year, four of which tanked. And his best performance was a cameo in  An Action Hero!

Star power took a further dent when Aamir Khan was disappointed with his laboured portrayal of an ill-conceived character in  Laal Singh Chaddha. Ranbir Kapoor’s hard work was hardly noticed in Shamshera and Ranveer Singh’s experiment as Jayeshbhai Jordaar flopped as well. Kartik Aaryan  and Varun Dhawan delivered the numbers but little else. However , veteran Anil Kapoor carried rickety vehicles like  Thar and Jug Jugg Jeeyo on his ageing shoulders and director Prakash Jha surprised everyone with his credible turn as a daily wager in  Matto Ki Saikil. Not to forget Amitabh Bachchan’s tear-inducing performance in Goodbye and  Uunchai. On the other end of the spectrum, Ayushmann Khurrana, who emerged as the face of the new age everyman, also had a poor run and critics started wondering whether his success was spurred by issue-based cinema or his performances. Rajkummar Rao surprised with some of his choices, but despite having little luck at the box-office, he remained on the right side of critics with compelling performances in  Badhaai Do and  Monica, O My Darling. Meanwhile, Vijay Verma grew in stature with a wicked performance in Darlings.

Focus on female characters took centre-stage, and actresses got better parts. Alia Bhatt delivered both the numbers as well as critical acclaim with  Gangubai Kathiawadi and  Darlings, and happily played the damsel in distress in  Brahmastra. Shefali Shah also had a terrific year with a string of powerful performances toplined by  Jalsa. Huma Qureshi caught the eye as the mercurial Monica and Taapsee Pannu continued to excel in complex roles.

Their artistic merit notwithstanding, there is a clear demand for films that give shape to the ideological narrative of the audience that has voted for the BJP. In March this year, one could see audiences protesting with the theatre management of a multiplex in Ghaziabad during the intermission to switch on the air conditioning, because the spectators could not bear the heat while watching The Kashmir Files, the second-biggest grosser of the year . Later on, Ram Setu also clocked good numbers and Karan Razdan returned from a hiatus to deliver  Hindutva. A still from ‘The Kashmir Files’

A wave of boycotts

Playing the super censor, a section of trolls on social media ran a boycott campaign against certain films on the basis of songs, colour and texture of outfits, beards, or the purported statements and political leanings of the lead actors in the film. Advait Chandan, director of  Laal Singh Chaddha, claims he was told that people were being paid to troll the Aamir Khan-starrer. Pejoratives like Urduwood and ‘Tukde Tukde Gang’ were tossed at an industry that is known for strengthening the syncretic culture after independence. There is no way to judge how much business was affected by this, but the boycott trend, but did spread negativity about the entertainment industry which was already reeling under the side effects of the pandemic. And, when the home minister of a State and a religious council started publicly judging the content and actors of a film, the Central Board of Film Certification seemed redundant all over again.

With fewer pressures to negotiate, the streaming platforms delivered some gems. However, the quality versus quantity ratio was still very poor. While  Jalsa,  Monica, O My Darling,  Darlings, Qala, Jaadugar, Jogi, and  Blurr impressed with their execution of ideas, the likes of Looop Lapeta, Cuttputlli, Govinda Naam Mera and Plan A Plan B made them look like a dumping ground for middling material from A-grade production houses. A still from ‘Qala’

Like the fashion world, the film industry is increasingly getting wary of criticism and film journalists, and is engaging with influencers to push for word-of-mouth on social media. During press shows and press conferences, there are more YouTubers than film critics. It seems the makers are not interested in a serious debate on their film, but this will affect the study of Hindi cinema in the decades to come. “Preferring a comedy show over a serious discussion during the promotion of a film reflects the frivolous approach of the top names in the industry towards the medium,” says Brahmatmaj who has written an open letter to Rohit Shetty, the filmmaker whose Cirkus will bring the curtains down on an underwhelming year.