Faylene and Godfrey Lobo’s house in Vypin is Christmas-ready, well almost. The Christmas tree will have to wait until the painters are done with the maintenance. It is usually up to coincide with Advent. Faylene has however started work on the confections and savouries that will be part of the consoad. While in Portugal it refers to Christmas Eve dinner; in Fort Kochi and Vypin, however, it is the tray of homemade goodies that used to be sent to friends and family, usually on Christmas Eve. Faylene hails from Vypin which, once upon a time, had a sizeable Anglo-Indian [primarily Luso-Indian or of Portuguese ancestry] community.

For the 60-year-old work starts in the first week of December when she starts making each item that goes into the consoad. The whole point is making everything at home and sharing, “it is a time of giving and reconciliation, of  keeping the spirit of Christmas alive.” She sees 20-odd days of work — making each item — at home as carrying forward a Christmas tradition handed down from her mother and mother-in-law.

A tray beautifully arranged with deep-fried, sugar-coated swirly kulkul, diamond cuts, the curiously-named coconut and semolina confection ‘matrimony’, achappam’s cousin rose cookies (or rosettes), fried doughnuts, marzipan, banana chips (also known as patticums), Kochi’s version of bebinca, slices of plum cake along with other eats covered with a delicate lace doily or crocheted cloth was sent to homes of family, friends and neighbours, some of who would be from other communities. Many sweet, some savoury — the consoad seems to symbolise life with its joys and sorrows.

Listening to Faylene it is evident that, for her, preparing the consoad is a labour of love. Every year she has been home she has ensured that the consoad goes out from her house. They had to give it a miss last year as they were travelling. “There have been years when I sent out 22 trays. It has now come down to 10-12; many from the community have migrated. There are very few of us left now,” she says. Changing times and lifestyles, along with COVID-19 have ensured that there are very few people who send out these.

Trinkets in a Christmas pudding

Godfrey Lobo remembers an aunt who would hide trinkets in the traditional Christmas pudding for the kids to find. “Buried in each slice would be a tiny sliver trinket, which we kids would be excited to find. And if one of us did not find anything, she would slip one into our hands so that no child went home disappointed.”

Denzel Bayer, vice president of the All India Anglo-Indian Association,  remembers saucers/half plates loaded with these going out from his home. “A domestic help would be sent to give these, she would be given a bakshish and sometimes, a return consoad. Not many people do it now,” he says. If there was a young child at home, they would also tag along. There was no standard list of items for the consoad, only that it was all homemade.  Influences meld in the consoad — Portuguese, Dutch, English and of course, the local.

Versions of consoad exist across regions in India colonised by the Portuguese. In Goa, it is known as consoada shared with grieving families that would not celebrate Christmas. Consoad derives from the Portuguese word consolar, which means to console. In the Konkan region, it goes by kuswar or koswad, a derivative of consoad, which had 22 items such as chakli and laddoos too.

The concept and components of the consoad have been adapted to the region it belongs to. For instance, the Fort Kochi-Vypin version uses coconut, jaggery, spices, rice flour, and nendran pazham (the Kerala plantain) in many snacks. The bebinca made here differs from the layered Goan version which is made of custard of egg yolks, coconut milk, flour, sugar and spices. Not only does the Kerala version use rice flour, boiled and mashed nendran pazham with whole eggs, but it also is not layered. It is more like the Kerala halwa. Gurugram-based sexagenarian Crescentia Scolt Fernandes, who hails from Kochi, remembers what her older sister told her about cakes and bebinca being baked at home by their grandmother more than 80 years ago. “The utensil would be placed in an uruli filled with sand, then placed on a wood-fired traditional stove. Heat would be given from the top as well. She used to pour the cake batter into egg shells placed in the sand where they would bake slowly. Like tiny cupcakes!” Now a home chef who specialises in Goan cuisine, Crescentia used to run a popular Goan restaurant Bernardo’s in Delhi.

A slice of Kerala, soaked in jaggery

She speaks of bolcoke, a cake made during Christmas. Semolina and coconut were the primary ingredients making it a somewhat crumbly affair. Over time improvisation includes adding flour to the mix, “I have tweaked the percentage of semolina and flour to get the right consistency,” says Crescentia. It is called baath in Goa.

Bolcoke as the Goan bolo de coco is called in Fort Kochi is indeed crumbly, unlike a regular cake, it is textured. It is part of Faylene’s consoad tray, which will have around 20 items, including two kinds of Christmas cake. This year’s addition is angel wings, a sweet, crisp pastry of twisted ribbons. She has added Goan specials such as perada, a guava cheese, which we do not find in Kerala. She is yet to start on the coconut-based sweets, which she will make closer to Christmas. This year she has accepted a few orders for consoad, which means she will be making larger quantities. 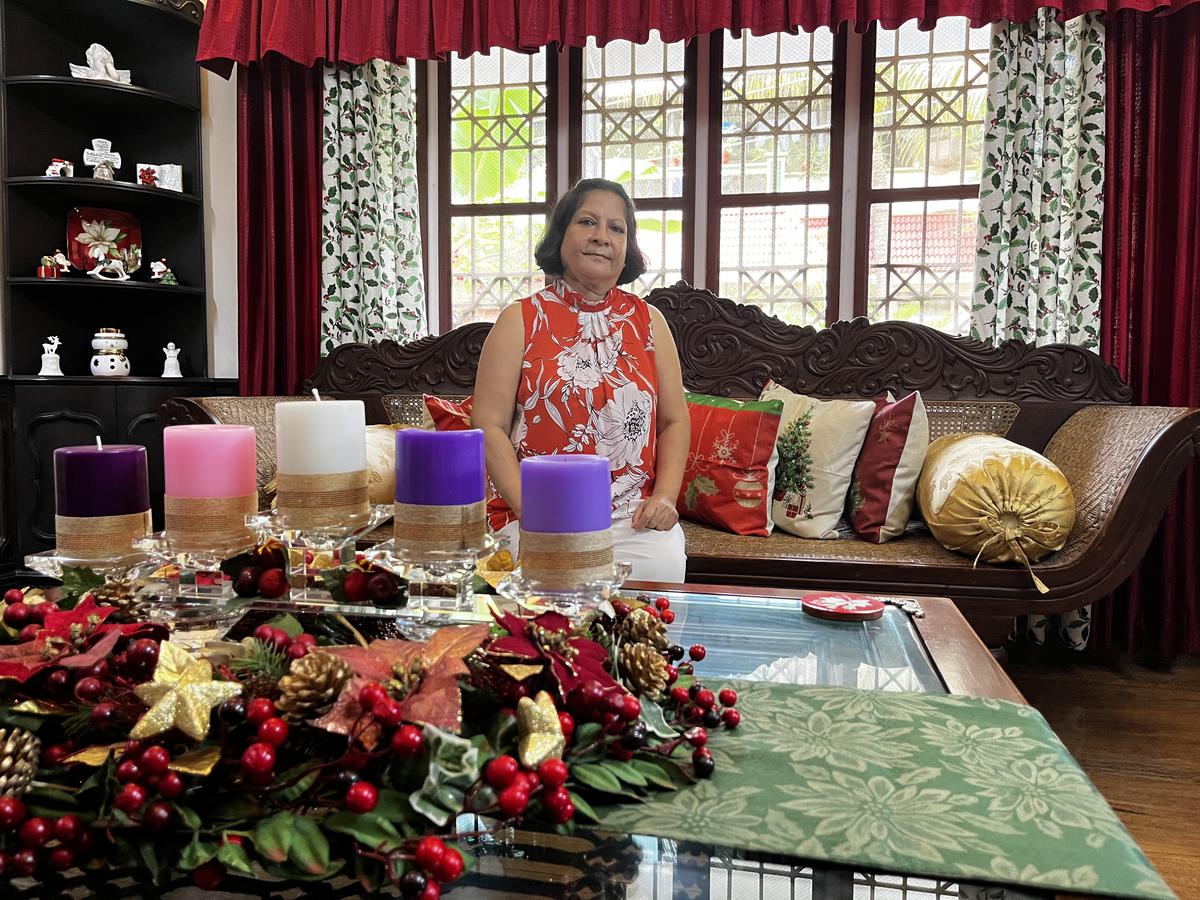 The consoads coming in are also fewer. The work of putting together a consoad is not easy, without help it is even more difficult. “And obviously people don’t want to send store-bought goodies,” says Godfrey, who retired from the merchant navy and is now entrusted with the duty of delivering the consoad.

Migration has left fewer people in the community to share the consoad with, but it is a tradition that Faylene is confident will live on. Her daughters-in-law have both learnt from her and have been making and sharing consoad, she is optimistic that the tradition will not die, yet!