Homeentertainment‘Meet Cute’ Telugu anthology review: A mixed bag, with two standout stories and other cheerful but generic ones
entertainment

‘Meet Cute’ Telugu anthology review: A mixed bag, with two standout stories and other cheerful but generic ones 
In the Telugu anthology Meet Cute, streaming on Sony Liv, debut writer and director Deepthi Ganta narrates five stories that are designed to be conversational, feel-good urban romances. The stories that stand out are the ones that go beyond the generic ‘chicken soup for the soul’ category. It is a mixed bag, as is the case with several anthologies occupying the digital space. What is interesting, though, is how only two stories take the typical girl-meets-boy route.

My pick is In L(ove)aw featuring Rohini Molleti and Akanksha Singh, whose chance encounter changes something in both of them, forever. The segment is written with sharp observations of real-life women. Rohini is brilliant as the mother Padma who sees her son, who she thinks is resting at home after a tiring week-long workshop, talking to a girl. Curiosity gets the better of her and she trails the girl — architect and pet volunteer Pooja (Akanksha Singh).

Padma’s anxiety and curiosity lead to both subtle and laugh-aloud humour in the way she scrutinises Pooja, as though holding a mirror to social tendencies. When the conversation gets going, the layers begin to peel and we get a closer glimpse of both the women.

The drama probes everything from how mothers tend to spoil their sons, and occasionally daughters, to voicing a woman’s plight in a relationship that feels lonely. In the silence between the lines, Rohini conveys volumes with just a glance and a twitch, and Akanksha Singh tries to match her, internalising both her past angst and the joy at the prospect of a better tomorrow and conveying the emotions effectively. It is a joy to watch these two women. Deekshith Shetty as the son is adequate. I wish the rest of the stories had similar gravitas.

At the fag end of the anthology comes Ex-girlfriend, in which Anjana (Sanchita Poonacha), who is irate with her husband Ajay (Govind Padmasoorya) and unexpectedly engages in a  conversation with his former girlfriend Kiran (Sunainaa). I won’t reveal more but do watch out for certain dialogues and observations that seem commonplace at first. When you look back, some of them appear more thoughtful and befitting. Deepthi springs a surprise towards the end, moving away from the otherwise cheery, sunny stories in the anthology. Sanchita and Sunainaa, portraying contrasting personalities, enact their parts well.

In both In L(ove)aw and Ex-Girlfriend, we see the men through the gaze of the women and watch how the relationships are likely to transform.

The two stories that fall into the girl-meets-boy meet-cute format are Meet the Boy starring Varsha Bollamma and Ashwin Kumar Lakshmikanthan and Star Struck featuring Adah Sharma and Shiva Kandukuri. The first one is a modern-day pelli choopulu wherein the prospective bride and groom meet at a predetermined location. Varsha, as Swati, is good at depicting a girl who is frustrated with these matrimonial meetings. She has saved the guy’s mobile number as ‘Dude no. 11’ and suggests the nearest restaurant with quick service so that the meeting can be done and dusted quickly. The familiarity of such situations adds to the fun. However, the story loses steam quickly. Ashwin turns in a charming performance as Abhi, and the entire backstory he narrates reflects his sensibilities but remains just basic. Lines such as ‘marriage is not a transfer of ownership, you don’t need permission to follow your dreams,’ though coming from a good intention, remain superficial and don’t make the story interesting. The rendezvous between Adah Sharma, an actress, and Aman Choudhary (Shiva Kandukuri) a paediatric cardiologist tries to explore what happens when a popular actress gets the space to be herself, away from the starry gaze. In a fleeting moment, the story tries to depict how the defense instinct of a female actor kicks in, since she is not new to dealing with strangers, often in crowded spaces. Both Adah Sharma and Shiva Kandukuri are charismatic and appear at ease in this breezy story through which Deepthi tips her hat to Notting Hill. Star Struck isn’t unique, but manages to hold interest.

A story that had potential but falls woefully short is Old is Gold, starring Sathyaraj and Ruhani Sharma. A worldly-wise elderly man sharing bittersweet relationship memories with a young woman struggling to fathom her husband’s (an effective Raja Chembolu) behaviour appears, strangely, generic. There are lines such as ‘relationships fail when you give up and stop fighting’ that may have been thoughtfully written but did not make me empathise with the characters. Both Sathyaraj and Ruhani are actors of merit but get very little to chew on. 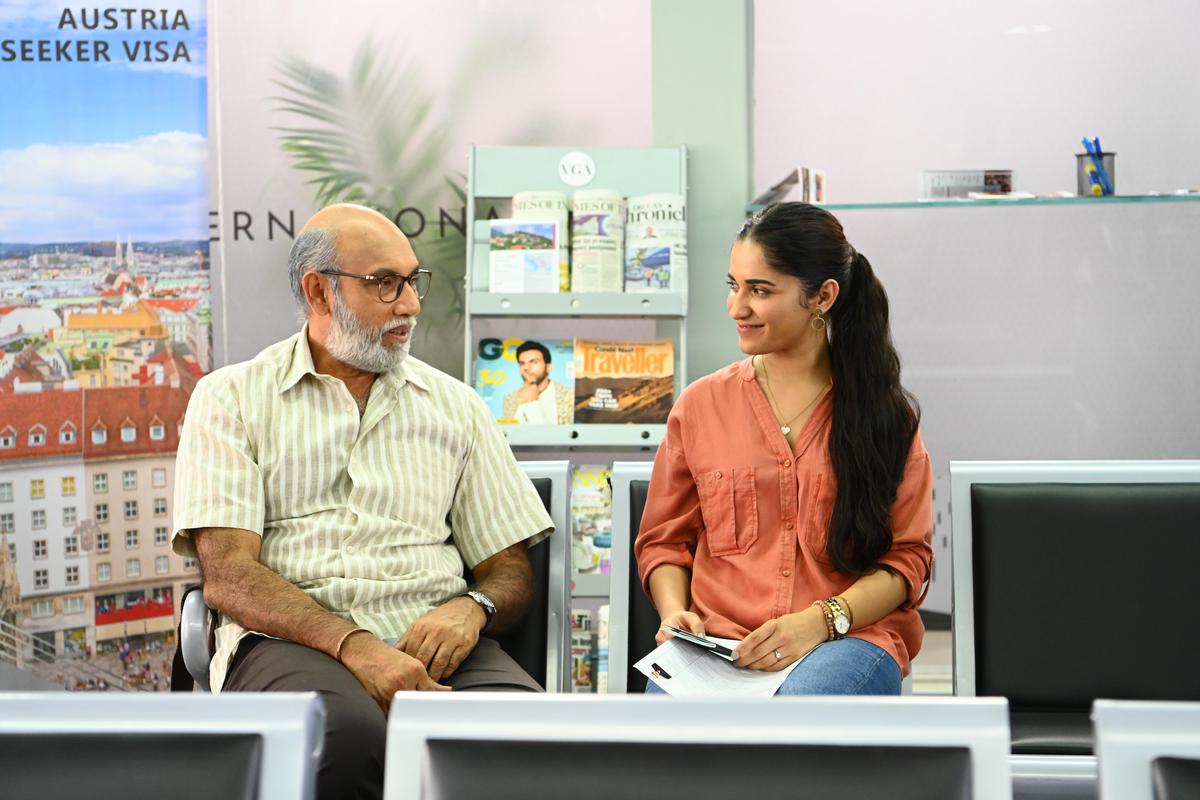 The songs by Krishna Kanth, composed by Vijay Bulganin, act as a foil to the stories. Vasanth Kumar’s cinematography and Avinash Kolla’s production design also deserve a mention.

Meet Cute has its moments. If only it had probed more into each story, as it did with In L(ove)aw and Ex-girlfriend, it would have been more worthwhile.