Back in 2012, Varada Sethu used to shuttle between Bristol, where she was studying, and London to play a part in her first Malayalam movie, Shyamaprasad’s English: An Autumn in London (2013). Today, the Kerala-born British actor plays the ruthless rebel Cinta Kaz in the Star Wars show Andor, starring Mexican actor Diego Luna and featuring Stellan Skarsgård, Forrest Whitaker, Fiona Shaw, and Andy Serkis.

With Luna playing Cassian Andor, who will one day become the cold-blooded rebel spy Captain Andor from Rogue One (2016), the series explores his rise from a selfish opportunistic thief to a rebel leader in our favourite imperial galaxy far, far away.

Apart from being part of such a huge franchise, Varada and her co-star Faye Marsay have made history for essaying probably the first significant queer characters in the Star Wars movieverse. However, at a time when representation is often used as a selling point for a movie or show, eventually othering the community being represented, makers of Andor made sure that their characters’ sexual orientation is just a small part of their complex personas.

In fact, the show has stunned viewers and critics alike with its grounded, layered and subtle portrayal of life and politics in a fascist empire.

Varada spoke to The Hindu in-depth on the show’s politics, her fascinating character and her work in Malayalam cinema.

Varada has played key roles in crime series Hard Sun (2018) and the last two seasons of spy-drama Strike Back.

Did you have any expectations when you got the call? That this is going to be a show like ‘The Mandalorian’, or other ‘Star Wars’ movies? I thought it was going to be like The Mandalorian. But Tony Gilroy, who is brilliant and is the showrunner, asked me to forget all about Star Wars during our initial discussions. This is a spy thriller. It’s a story about a revolution, and how Cassian’s character can go from someone who isn’t politically not that swayed to becoming the captain in Rogue One. It’s a world full of wars and spies, and it just so happens to be set in the Star Wars universe. But this isn’t a Star Wars show. That’s what he kept saying.

I watched episode 10 yesterday and it’s quite something. This is too political for any show not just for ‘Star Wars’…

I think, shows aren’t political enough. So, this is incredibly courageous. The first time I read the script I cried. I felt that this is going to be such a special show. It was so beautifully written. Sometimes you read a good script and you are not sure how they will execute it. But this, as far as I have seen, they have done justice to every single word on the page. I don’t think it’s too political.

No, I am not saying it’s too political [in a bad sense]. Just that compared to all the other ‘Star Wars’ content till date, this show goes deep.. Exactly. I think that’s what Tony wanted. It’s not about churning the Star Wars lore again and again, and you know, swimming in that story. It’s about a bigger message and a bigger statement. I think he is just studying how fascism tend to foment. But what’s brilliant is that it shows both sides. You get to see the [side of] bad guys as well.

It’s such a layered depiction of oppression; the prison-industrial complex and the excesses of a police state.

Yeah. The police brutality is a theme and there is [the criticism of] the prison complex. Then there are other things as well, [such as] colonialism. I loved that. The whole theme on how natives are treated by the empire.

Colonialism and exploitation of native lands for resource extraction is one of the main themes of ‘Andor’
| Photo Credit:
Disney+

Yeah, when they [imperial officers] say that they are getting these “stinky” natives out of here. It’s just so smart [how it’s depicted]. The whole rehearsal process for it [rebel heist in Aldhani] was brilliant. It was during lockdown and I didn’t think I would get to see other actors till we were on the set. But the director [of that three-episode arc], Susanna White, was brilliant in bringing us together. We got to read through the scripts with each other and had this whole process, and she even gave us homework to do. We had to watch these documentaries.

What kind of documentaries? They were all on real-life rebels and conflicts. Can’t Get You Out Of My Head by Adam Curtis was one of them. Susanna also gifted us this book, Shoot the Women First, about women in rebellions or conflicts and how they are perceived differently. I think it’s a direct quote that somebody said: “Shoot the women first” because it is women who slip under the radar as people assume that they are meek.  We actually got to dig deep into the horrors of being a rebel, which is what Rogue One and Andor does.

There are some great blogs out there that picked up on this, that the Star Wars movies, as brilliant as they are, kind of glamourise the lives of rebels. Then you have Luke Skywalker coming in with the mind tricks, and everything happens when it needs to happen, whereas the average life of a rebel is shit. It’s crap. It’s difficult. You are hunted. You are in hiding, and you are constantly fighting for your rights. That’s what I liked about Andor. It’s saying this is what actual rebels do. Skywalker [in the first three movies] is building off of what rebels did in Rogue One, and that’s how rebellions work. It’s the people that do the groundwork, and then the heroes kind of win.

It’s basically what Luthen, Skarsgård’s character, monologues about, that his work will be forgotten by everyone, but he will still do it.

That’s my favourite speech. I got to have drinks with him, and he did that monologue for us. It was just me and my friend Sule [Rimi], who plays Lieutenant Gorn. We were up till 3 in the morning chatting with him, and we got really into the philosophy behind Andor. This is the base belief that all the rebels have, which is that I am planting the seeds for a world that I am not going to see and I will never get to enjoy the fruits. The tragedy of that acceptance is beautiful.

Most of your co-actors have these great speeches and lines. Your character Cinta is quiet. 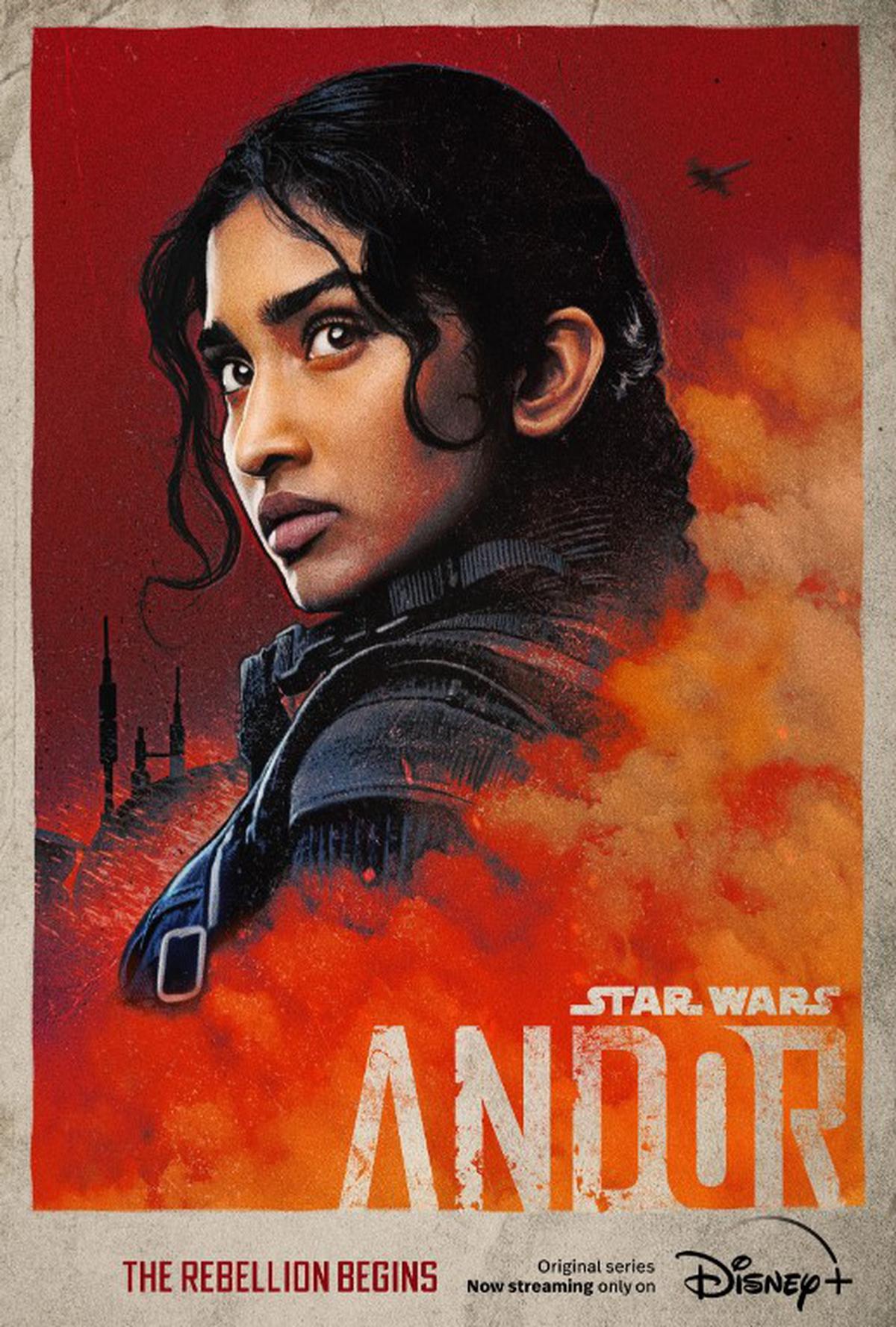 She was written as someone who doesn’t speak a lot, but when she does, she holds a presence. I think Vel (played by Faye) was described in the script as someone who is physically powerful and commanding, and Cinta is the one who looks meek, and may not be capable of violence. So it’s a shock when people see her in action, which also ties into the ideology of women slipping under the radar.

To me, it made sense that she wasn’t saying a lot because this is someone who has been through so much and is suffocating on her own rage and anger at the injustice. So, why would she waste words, or her breath, talking about it. All you get is a glimpse of who she is and a throwaway line on how her family was slaughtered by stormtroopers. So, I imagined her as a survivor of a genocide.

Not just Cinta, most characters in the show are provided with very little backstory. Yet, they have a lot of depth.

This is what’s great about his writing. Even if you don’t get a huge amount of information upfront, every character has a unique objective in everything they say. Each character feels lived-in. You feel that these people have existed since the day they were born and we are getting a snapshot into their lives.

Speaking of lived-in, what I loved about Cinta and Vel are that their queerness do not define them. 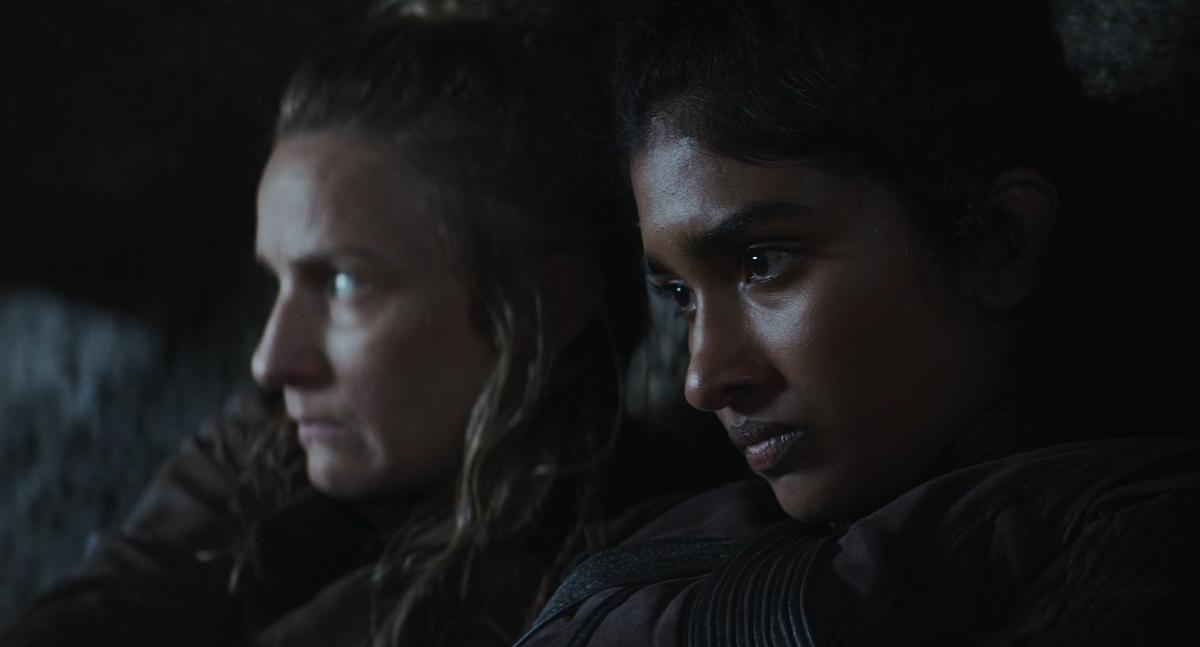 I loved that it’s not made a big deal of. It’s just like something that exists, and other team members just accept them. It is such a quiet moment in the show [when it’s suggested that they are together]. I genuinely don’t think many people have clocked that. I expected there to be loads of people picking up on it, and there really wasn’t. That’s actually even more beautiful because, ideally, it shouldn’t be a big deal at all. He is an absolute darling. I was a huge fan even before the show. I studied Spanish in school. As part of that, you are encouraged to watch Spanish films, and I had watched some of his movies like Y tu mamá también (2001).

He must have had a rough time shooting Andor. I mean, he is fluent in English. But it’s not his first language. If I had to study an entire script in Spanish, my brain would get saturated at some point. Likewise with Malayalam. I did a film ( Pramadhavanam with Unni Mukundan) recently with Jayaraj [uncle]. I speak Malayalam and I know Malayalam, yet I really struggled by the end of it. It just doesn’t feel like my first language anymore, which is really sad. But Diego was shooting for an entire year, away from his family in Mexico, yet he carried himself so well. That’s how I want to be if, and when, I make it big.

How was the experience working in English, your first Malayalam movie?

I really enjoyed it. I didn’t struggle as my character was born and brought up in the UK, and did not have any lines in Malayalam. I can’t really read Malayalam. But it was great to be working in a set where everyone spoke my language and had great Indian food. It felt like a family.

Was the second film with Jayaraj more fun?

It really was. Mostly because I was no longer a student and it felt a lot more professional.

Varada’s second Malayalam movie is based on a story by the famous writer Madhavikutty.

Do you plan to do more movies in Malayalam?

Yeah, if it’s a good role and script. I think that would be my condition. But I can’t straddle both worlds, and right now I know the career that I want to build is in the British and American market. It is impossible to do a film elsewhere without taking time away from this. So, if I am going to do that, it has to be something that I feel connected to.