HomeLifestyleMixologists raise the bar at parties in Kerala
Lifestyle

Mixologists raise the bar at parties in Kerala 
Whether it is wedding receptions or birthdays, bachelorettes or corporate shindigs, the party scene in Kerala is in high spirits thanks to a rush of mixologists whose skills leave guests both shaken and stirred.

At a mehendi function in Thiruvananthapuram, guests were treated to a dazzling display of pyrotechnics as a bartender breathed fire with ‘flair,’ simultaneously juggling three bottles in the air, while patrons sipped on craft cocktails.

While cocktails and their comparatively demure counterparts — mocktails — have for long been available on beverage menus in luxury restaurants and hotels, they were mostly aspirational beverages. That scene has changed. “Cocktails have become a mainstay of events in Kerala,” says mixologist Saj Gopi, who runs Blue Ice Bartending company in Kottayam.

“Earlier, most people were only aware of classic cocktails such as a mojito or a Bloody Mary. Lately, guests are more knowledgeable about liquors and mixers such as flavoured syrups and liqueurs, tonic water, fresh fruit and juices etc, and are willing to experiment along with us,” says Jith George, a mixologist based in Kochi. “The trend is most obvious among young adults and women,” he adds.

Many of them try to incorporate local ingredients in their homemade syrups such as cinnamon, tamarind, coconut, cloves, ginger, turmeric, gooseberry, mace and even vazhapindi (banana stem) juice and herbs such as Rama thulasi, a variety of holy basil known for its aroma and mild sweetness. Thiruvananthapuram-based mixologist Pramod S Nair’s ‘Fire n’ Ice,’ a mix of green chilli, lemon, gooseberry and salt, that he ferments in a bharani (crock jar) for a few hours, for instance, is a firm favourite in the city. It pairs well with white spirits or with plain soda for the teetotallers.

Saj’s signature concoction is ‘Idukki Gold,’ essentially white rum infused with whole spices of Kerala and Jith’s is a ‘Spicy Vodka,’ a blend of coconut milk, bird’s eye chilli ( kanthari) and lime. “For ‘healthier’ options we use sugar-free syrups, vegetable or fruit juice-based cocktails and kombuchas,” explains Rahul N K, a mixologist from Thalassery, now based in Kochi. He adds, “It depends on the occasion. At a wedding the other day, I was asked to create pani puri shots, sangrias and sangritas.”

While gin, vodka, white rum and whiskey-based cocktails are a hot favourite with customers, the mixologists say that customers nowadays also ask for drinks based on exotic liquors such as Mezcal, Sake and Sri Lankan arrack. “Many of our customers bring back such speciality liquors from their travels and we often get special requests to design cocktails based on them,” says Saj.

Most mixologists have their own signature cocktails (and mocktails) and usually brew the mixers themselves. “The latest trend is to make cocktails with crystal clear ice cubes, homemade syrups and carbonation instead of diluting with soda,” says Rahul N K, a mixologist from Thalassery, now based in Kochi.

It’s wedding season in Kerala at the moment and the mixologists have never been busier. “We get around 23 gigs a month during the festive season, ranging from small family celebrations to events with hundreds of party-goers,” says Saj.

They get the gigs via word of mouth or contacts in the hospitality industry – caterers, event planners and such and even from Instagram. The costs vary depending on the number of guests and can range anywhere from ₹10,000 for smaller functions (say 20 people) to upwards of ₹25,000 for about a 100 guests. “One mixologist can handle up to 50 guests,” says Ajith Micheal, a mixologist from Kochi who has been in the business for 10 years.

Almost all the mixologists seem to have fallen in love with flair bartending while working in the hospitality industry. Nowadays, there are a handful of institutes that teach flair bartending in Kerala, typically a three-month course. 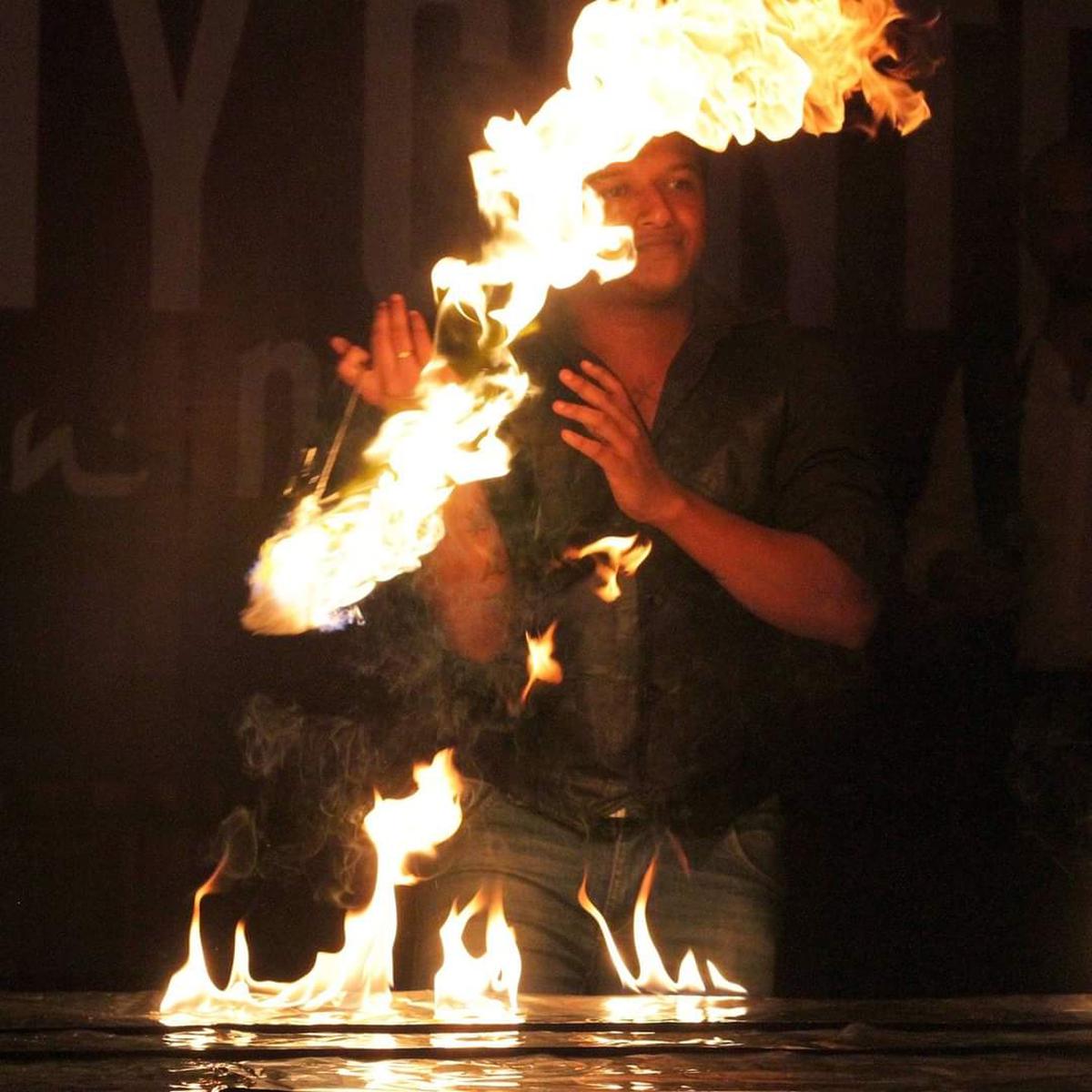 “Most of our students are hotel management graduates who come to study it out of interest and also after realising the lucrativeness of the craft,” says Jith, centre head of the Academy of Hospitality and Management Studies (AHMS), in Kochi. Rahul, director for training at the Institute of Flair and Mixology in Kochi, adds: “We get around eight students per batch. You have to have a passion for flair bartending. It’s not as smooth as it looks.”

That’s because flair bartending is a performance art. “It’s important to be mentally and physically agile and showmanship is also very important,” says Ajith. He adds that typically, at a gig, they break into flair (juggling and fire-breathing) once every five to 10 mins. “Not every mixologist is a flair bartender. Typically we go as a team where some do the flair tricks in between pouring drinks and others concentrate on their mixing wizardry. Once you get the hang of flair bartending, it’s pretty much instinctual. Nowadays, customers insist on flair as a part of the package,” he explains.

Mixology, meanwhile, is a science. “Not all liquids can be mixed together. Our job is to find a way to make everything and anything go together,” says Rahul. “You also have to have the basics stored in your brain as well,” says Pramod. That’s a tall order indeed given that there are thousands of cocktail recipes! And that’s apart from the 32 contemporary classic cocktails listed by the International Bartenders Association, the apex body for the craft, that every mixologist worth his Margarita salt should know!