Why Chennai’s timeless Art Deco buildings must be preserved Even as many of the city’s independent houses are being razed to make room for apartments, historians and architects urge locals to record and preserve the Art Deco buildings that define the city. How do you recognise them?

Even as many of the city’s independent houses are being razed to make room for apartments, historians and architects urge locals to record and preserve the Art Deco buildings that define the city. How do you recognise them?

Lata Madhu, of multi-designer store Collage, recently moved her store to an Art Deco home in Nungambakkam. “We have lovely examples of the style across homes near the Music Academy, and in Purasaiwalkam. When I chose this home for my store, I wanted to keep almost all its aesthetics intact, including the exquisite roof and floor, while highlighting the natural lighting and adding glass between the veranda and house. The style is so unique, with its pillars and cornices; it has to be showcased in its totality,” she says, explaining why.

As independent houses are being increasingly razed to the ground to make way for high-rise apartments, there is a move to record and preserve the city’s remaining Art Deco buildings. How do you recognise them? Simple lines, elaborate staircases, pillars with cornices, and wraparound balconies with concrete grills are a common sight in the bylanes of Royapettah, Mount Road or Thyagaraja Nagar, telling a tale of a bygone era.

The Art Deco movement swept USA and Europe through the years bookended by the two World Wars, the design elements of the movement gained popularity among city architects. Chennai’s romance with the Art Deco movement coincided with India’s freedom struggle, when the Madras Presidency embraced the architectural style imbued with clean lines, simplicity and departure from the Victorian Gothic and Indo-Saracenic styles of the day.

One of the earliest Art Deco structures in Chennai was the Royapettah Clock Tower built in the 1920s, followed by the 1938-dated National Insurance Building on NSC Bose Road, designed by LM Chitale. Further down the road, the iconic Dare House was built in 1940 as the office of Parry’s company (now Parry’s Corner). 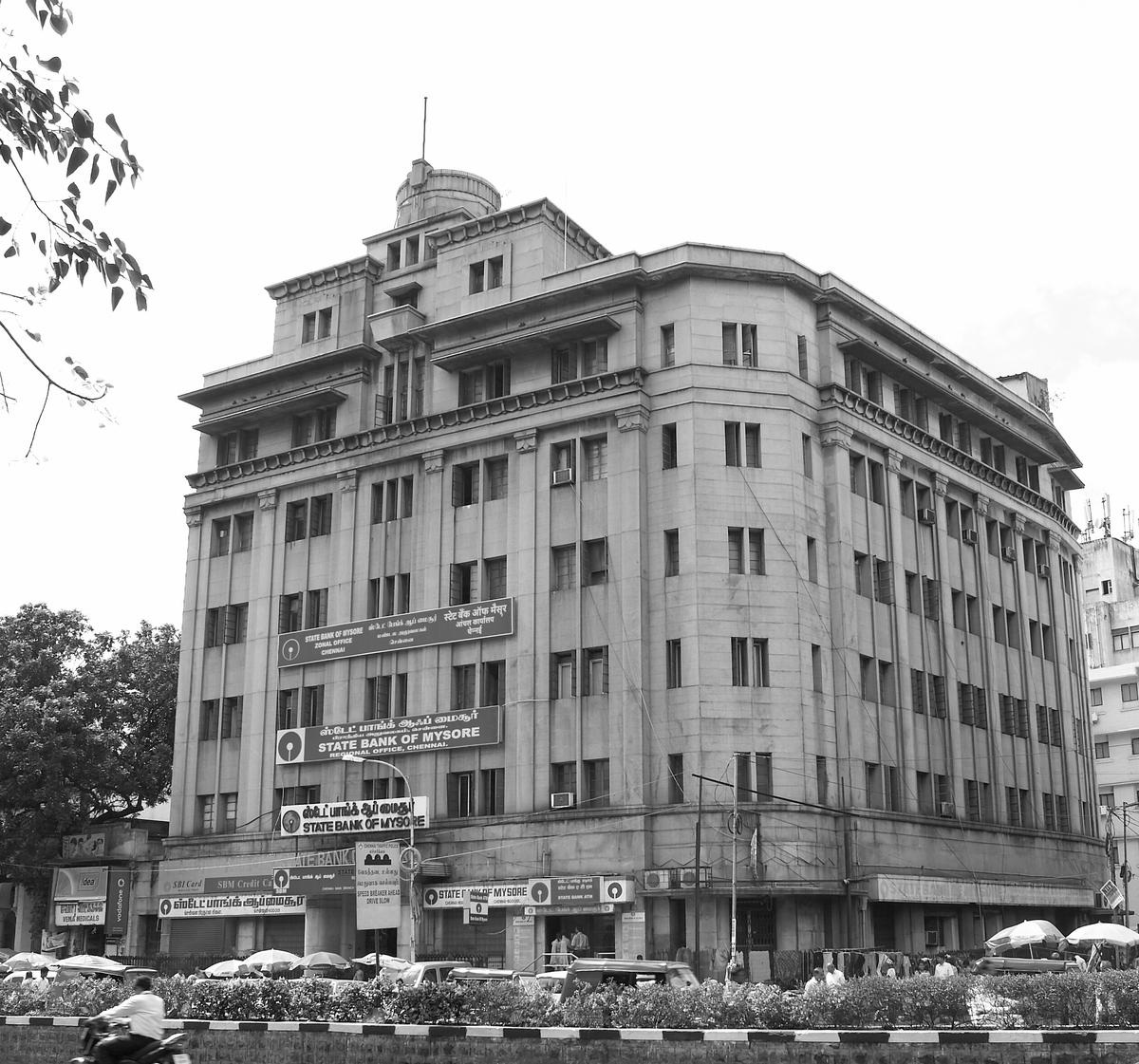 The building of the State Bank of Mysore in Chennai
| Photo Credit: Special arrangement

Sujata Shankar, Chennai-based architect and convenor of the city’s INTACH Chapter, reminisces, “The movement was a new aesthetic, whose entry to India was delayed, but it lasted longer. It reflected a mindset of minimalism, freedom and echoed the mood of the people.” In Royapettah some residential buildings still bear columns, balustrades and parapets, incorporating the Art Deco sunrise motif in the jaalis.

Chennai’s earliest buildings in the Art Deco style can also be seen along the stretches of Netaji Subhash Chandra Bose Road, beginning from EID Parry, and the Esplanade area. Sujata says, “The old insurance and bank buildings had the ziggurat feature. Addressing a corner with a curve was another hallmark seen across buildings in the older parts of the city. CIT Colony, Gandhinagar and homes of yesteryear film stars also had strong deco elements: fascinating floors, mosaics, staircases with wooden balls at the top and balustrades.” Ashmitha Athreya, an architect and head of operations at Madras Inherited, a city- based initiative that undertakes heritage awareness, preservation and conservation in the city, conducts heritage walks through Triplane, Mylapore and T Nagar. “It’s fascinating to see Art Deco typeface on buildings like the Dare House. Row houses on Nadu street in Mylapore have jaalis with sunburst elements, and we also see deco motifs in the Broadway Talkies and other buildings on NSC Bose Road.” Athreya observes, the style trickled down from the wealthy as the landed class sought to embrace this new architectural style, and, “as time went by the middle class borrowed elements from it, so you find deco across the city.”

The movement was short-lived in Madras. It was a time when concrete was first used, cantilevers were built, and nautical motifs, like portholes and curved balconies, first appeared in local residential edifices and office buildings. “Casino Cinema Hall, Kamadhenu Theatre, all had soaring vertical lines; other buildings in George Town and Esplanade have some of the best features of the deco movement like Olympic rings, and the frozen fountain design. This movement also coincided with the discovery of the tomb of Tutankhamun in Egypt, so you find Egyptian motifs across deco buildings,” states Sujata Shankar.

While some buildings built for business still stand tall, historian V Sriram bemoans the decay and destruction of Art Deco residences in the city. “The movement was the worst victim of modernisation in Chennai. Our Indo-Saracenic buildings are larger than life and command a place of pride but in private spaces, deco is fast disappearing. Many homes in RA Puram and Mandaveli are gone. Meanwhile Mumbai is doing a fantastic job of saving its Art Deco stretch across Marine Drive.”

Sriram suggests, “Transfer of Development Rights is a good way to prevent developing the property, despite losing out on the monetary profit from renting out the space.” Transfer of Development Rights is a zoning technique that conserves land by redirecting development that would otherwise occur on the land to another area suitable for denser development. This way, Art Deco buildings can be saved, while owners of the property are compensated by giving them real estate options in other parts of the city, albeit of lower value. This instrument has been used in the Khotachiwadi and Bandra areas to conserve heritage buildings in Mumbai.

Ashmitha speaks of her home in Choolaimedu that followed the Art Deco style not just its exterior facade, but the interiors as well. “There was typically a small office as you entered the home, to see visitors, without encroaching on the entire space, the bathrooms were all the way at the back and you could see the entire home from a vantage point.” Built with lime mortar and Burma and other sturdy teak, she opines maintenance can be difficult these days, “we don’t use lime mortar any more, and these houses were built for larger families, so aging couples whose families have migrated, sometimes cannot maintain them.”

Sriram exhorts a public-private model to save the buildings, because most families need the extra income and are not willing to preserve it, or are at the risk of losing rent. Stating that there is now a resurgence in value for antique Art Deco items, from perfume bottles to furniture and vintage cars, Sriram adds, “Some of these homes like the Bedford Villa in Santhome still stand but people need to really value their homes. The way I see it, the value of property only increases over time, and a higher price is just round the corner.” AstaGuru, a premium auction house recently presented a curated mosaic of coveted jewellery, vintage silver, and timepieces, with several Art Deco inclusions that shine a light on the legacy of the influential movement in jewellery tastes and preferences. A pair of Art Deco bajubands set with old cut diamonds and natural Burmese rubies in a typical chevron design, an Art Deco diamond ring set with an old European cut diamond flanked by four diamond baguettes mounted in platinum, Art Deco inspired diamond bangles and a five row graduated Burmese ruby bead necklace were some of the pieces that had winning bids over ₹11 lakh each.