HomeentertainmentThrough a queer lens: Nishat Fatima’s ‘The Galaxy of Endless Possibilities’ is a fresh look at LGBTQIA+ identities
entertainment

Through a queer lens: Nishat Fatima’s ‘The Galaxy of Endless Possibilities’ is a fresh look at LGBTQIA+ identities

An upcoming photo exhibit seeks to bridge the divide between what photographer Nishat Fatima has discovered behind terms like LGBTQIA+, queer, trans, to name a few, and the perceptions of people who have always wondered about them and their lives, yet been put off by how quickly the jargon evolves. This description, of course, is an oversimplification of the highest order.

Photographed in and around Hyderabad since she was approached to do the project by festival director Aquin Mathews this August, Fatima’s large-format works — a total of eight portraits, each standing about four feet in height — will hang at the State Art Gallery in Madhapur, Hyderabad, for a full month as part of the India Photo Festival.

Nishat Fatima’s ‘The Galaxy of Endless Possibilities’ shows the LGBTQIA+ community as they are, at places and in spaces comfortable to them.
| Photo Credit: Nishat Fatima

Accompanying the pictures will be an audio component, snippets of conversations with the subjects, as an introduction to their lives and the work they do at the ground level, away from the glamour of social media and the public gaze. “One of them, an activist who works with at-risk youth, told me that they were feeling a little jittery at the shoot,” says Fatima, former editor of Harper’s Bazaar India, who also has a solo show, titled ‘A Surrealist Feeling’, at the Goethe Zentrum (till November 18). “But they put on a brave face and went through the process because they thought it would open doors for their friends and colleagues.” “My village was so small; I did not know that there was a transgender in society. I felt I was the only one born like that…,” says Harshini Mekala (she/her).
| Photo Credit: Nishat Fatima

A brave look at queerness

Titled ‘The Galaxy of Endless Possibilities’, this body of work is exactly that. A collective brave face that represents an important human aspect of the LGBTQIA+ community — social workers and mentors operating at the grass-root level — photographed as they are, at places and in spaces comfortable to them, worked into individual collages artistically linking the subjects’ lives and the work they do within the community. And just like the subject and the sitter for each portrait is different, so is its treatment and final result.

For example, explains Fatima (who studied photography at Spéos in Paris), the way a collage is designed may have something to do with the role the sitter fulfills in the lives of the people they work with, and may even be linked to a personal story — discoveries that the Hyderabad-based photographer encourages you to make of your own volition at the gallery, listening to the sitters talk directly to you. Her aim, though, is to transcend the labels of lesbian, gay, bisexual, transmen, transwomen, genderqueer, intersex, non-binary, asexual, pansexual, demi pansexual, and other such identities. “We have far more in common than we care to admit,” says Fatima, who identifies as cis-gender. 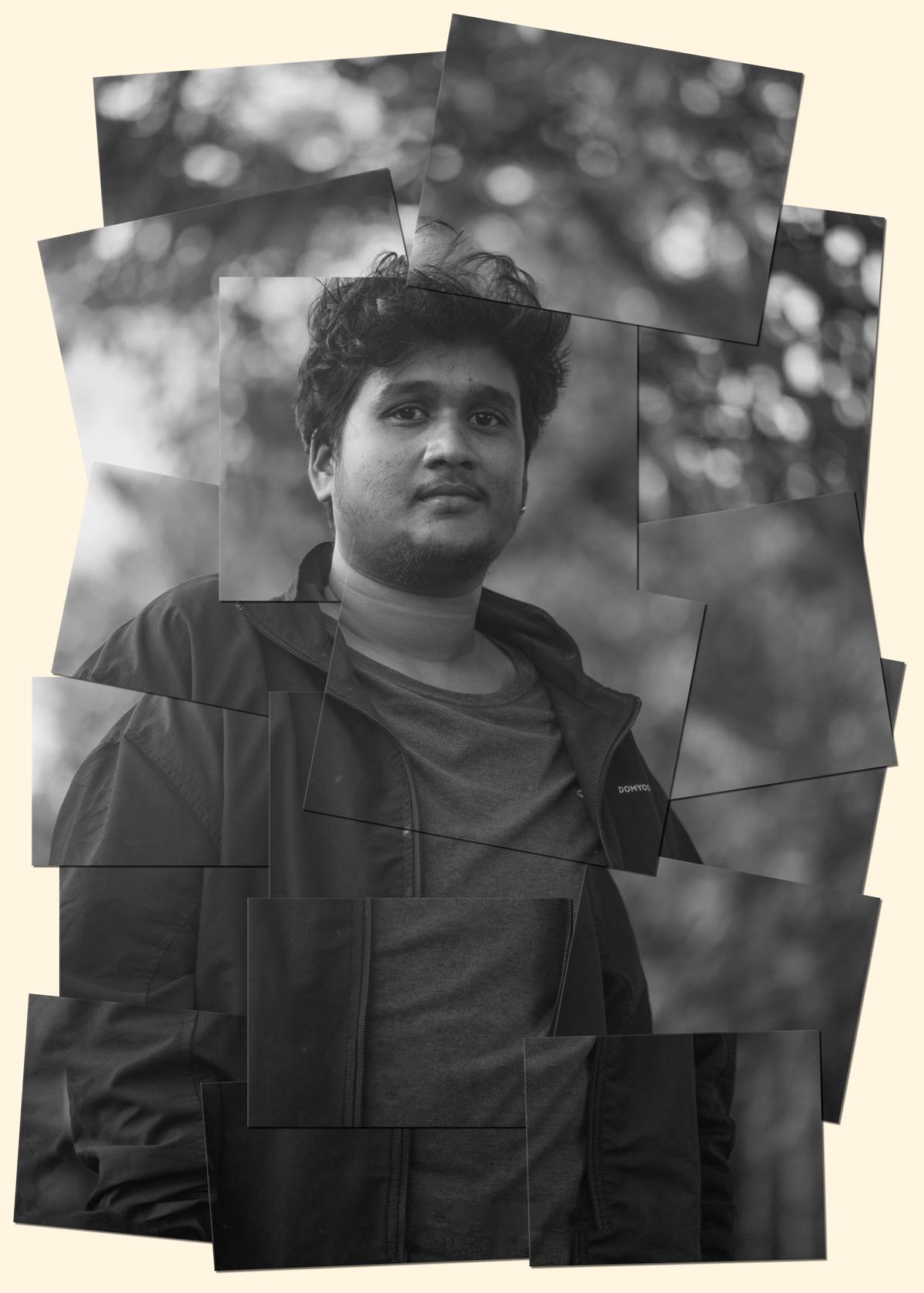 Vimal (he/they) identifies himself as a transman. The social activist works with the organisation, Star.
| Photo Credit: Nishat Fatima

From an outsider’s perspective

This leads me to question her about the nature of allyship — where non-queer people like herself are appreciated for their support of non-normative folk, but are also expected to cede space instead of speaking for, and on behalf of, the traditionally oppressed. I ask her if this ever made her hesitate, rethink about taking up a project that centered queer identities?

“Yes, it was the first thought that crossed my mind, which is why one of the more important aspects of the series is the audio/text from the people whose portraits are part of the project,” she says. “But does that also mean that there is no way an outsider, somebody who’s not a member of the community, can create any work, even if it be well-intentioned and informed? I’m looking for clarity on this as well.”

Perhaps this show will be a first step in Fatima’s journey of discovering answers to such fundamental questions, and invite others to begin questioning their own beliefs and roles in such contexts.

The India Photo Festival is on from November 18 to December 19.

The writer is a fashion consultant and commentator based in New Delhi.