HomeLifestyleLocal and seasonal, the new buzzwords in the brewery industry
Lifestyle

Local and seasonal, the new buzzwords in the brewery industry The heady aroma of smoky rings of pineapple fresh off the grill. Pungent Naga chillies punctuated with notes of ripe guavas. Dried kokum fruit that leaves a lingering pucker. Normally you’d associate these fruit and spices with a cornucopia of Indian recipes in the kitchen. But local and seasonal are the new buzzwords in the food and beverage industry.

In tandem with this trend, a maverick band of Indian brewers and distillers is now making millet beers, basmati vodka with Indian spices, and fruit-forward meads, while experimenting with seasonal, indigenous ingredients.

Nakul Bhonsle, director of the six-year-old Pune’s Great State Ale Works, plans to bring out “one millet beer every quarter”. He says “it started with my association with climate scientist Amrita Hazra, who returned from California after promoting the ‘Millet Project’ where breweries used Kodo and foxtail millets instead of grain.” (The North California-based project seeks to identify microclimates and soils to grow millets, providing food diversity and reducing reliance on wheat and corn as primary grain sources.) 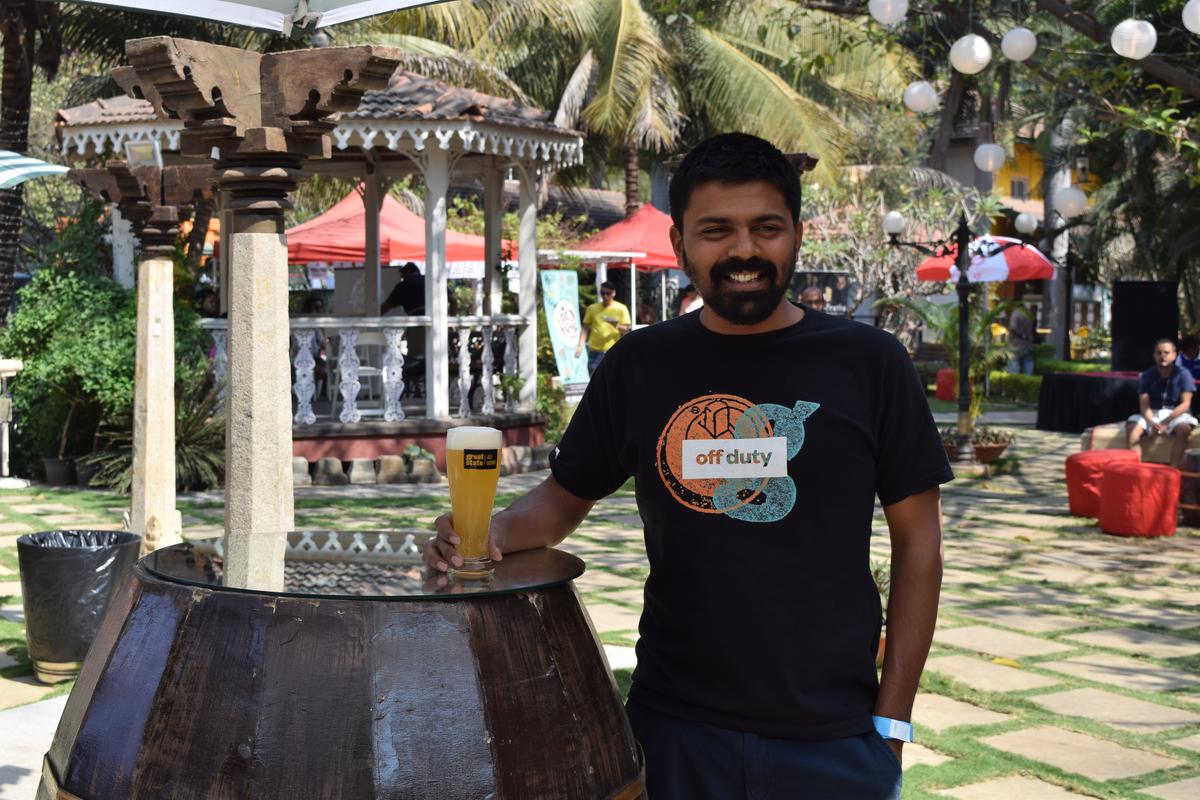 The team at Great State Ale Works discovered that sprouted millets like ragi, do not malt. “Then unmalted raw bajra was used. While malted barley has enzymes that break down complex sugars into simple ones, we had to identify that enzyme in bajra,” he says.

At present, the brewery uses 58% unmalted raw bajra and has “released four-five millet-based beers with 30-60% bajra content,” he sums up. The millets for the beer are sourced from farmers in the Vidarbha region in Maharashtra. The microbrewery got popular for its millet beer growlers during the pandemic, even opening a taproom in 2021. Another Pune-based spirit brand, Moonshine Meadery, which claims to be Asia’s first mead-maker and has presence across Karnataka, Goa, Maharashtra, Assam, Silvassa and Rajasthan, also took to seasonal ingredients for their special edition MeadLABS.

The brand’s latest offering, Hibiscus Ginger Mead, comes close on the heels of Salted Kokum Mead, an ode to the seasonal sour fruit found on the Konkan Coast. Its co-founder Rohan Rehani Rehani elaborates, “We source the Kokum and Roselle Hibiscus from Sindhudurg and Nandurbar districts of Maharashtra respectively. The Ginger is sourced locally from our local mandi (market). The Multifloral Honey is sourced from multiple farms across Uttarakhand and Punjab.” Previous editions of the MeadLABS include the summer favourite, Mango Chilli mead, a fusion of multifloral honey, local Kesar mangoes and Andhra Guntur Chillies — a sweet- spicy double punch that mellows with every sip. This summer, Delhi-based Bira91 brought mango to the party, as part of its limited-batch ‘Imagined in India’ series. It featured four beers — The Bollywood IPA, Kokum Sour Beer, Brown Ale and Mango Lassi Ale — with distinctive styles, informed by seasonal Indian ingredients. The Kokum Sour, a Sour Ale, complements the Indian summer, marrying indigenous Kokum from the Konkan Coast with a hint of salt, while a Brown Ale, is a blend of English Nut Brown Ale and the Antwerpian Amber with strong notes of coconut and vanilla, reminiscent of an Indian coconut laddoo, with a beer to boot.

By far the boldest iteration in the series is the Mango Lassi Ale, which is made by merging Bira 91’s flagship Wheat Ale with a milkshake beer. The mango-lactose notes gentle and smooth, bringing back fond memories of thick mango lassi, but with an adult appropriate spin. CEO Ankur Jain explains, “Using locally sourced seasonal ingredients for our limited-release variants is not only an enhancement to the beer, but also builds familiarity for the Indian consumer.” Bira91 has also blended locally sourced coffee from the Malabar hills for its Malabar Stout, crafting a beer meant to mimic a cold brew coffee with alcohol. The next offering also comes from Delhi. NV Group’s Smoke Lab operates six state-of-art distilleries (in Punjab, Haryana, Chandigarh, Goa and Maharashtra), at what they claim is a zero-waste facility with a zero carbon footprint. The basmati-rice based vodka is distilled five times using ultra-modern charcoal filtration and comprises two variants launched in 2019, the SMOKE Classic and the SMOKE Aniseed. The first week of November marks the launch its third variant, Smoke Saffron Vodka – an homage to a spice used so often during the festive season, and in Indian kitchens. Its founder, Varun Jain, shares, “At Smoke lab, we believe we can play with one more flavour offering which is intrinsic to India. Hence, we thought of saffron, sourced from the Pampore region of Kashmir, and we are working on a plan for uplifting the local community.” Varun adds, “Basmati rice is ingrained in our vodka and is the differentiating element of our product, so it will remain the base as we launch multiple Indian flavours.” Indian brands are making a splash on the international scene. Moonshine Meadery won international recognition for its use of distinct local flavour profiles — the Guava Chilli and Grilled Pineapple meads — at the 2022 International Wine and Spirits Competition (IWSC), which is one of the longest-running spirits competitions in the world. The brand’s meads stood out in the category of ‘Alternative drinks including lighter/low and no alcohol’ at the competition. Made with multi-floral honey, guavas sourced from the Khed-Shivapur in Pune District, and Naga Ghost chillies from Assam, the Guava Chilli Mead won the Silver, scoring 91 points out of 100. The Grilled Pineapple, which won the Bronze, uses pineapples sourced from Sindudurg district in Maharashtra, which are then charcoal-grilled on an open flame, bringing about a unique smoky peat-like flavour to the drink. Rohan Rehani, co-founder, Moonshine Meadery, exclaims, “This is another tremendous endorsement of the quality and taste of our uniquely flavoured seasonal meads and we are extremely proud to be recognised by IWSC.” Indian flavours are a thread running through most of the brews at Great State Ale as well. Experimenting with local produce is a hallmark of this microbrewery which uses seasonal ingredients for small-batch releases to create beers that sing of terroir. It offers West Bengal’s famous Gondhoraj Lime, Pedro’s Nariyal Pani, a coconut cream ale, and a variety of Saison style beers. (Saison -French, “season,” a pale ale that is highly carbonated, fruity, spicy, and often bottle conditioned.) Nak-Nok, a Tamarind Sour Saison, has the sour taste of local tamarind and distinctive sweetness of palm jaggery, and Meeth, a Salted Kokum saison, sources dried kokum from Ratnagiri in Maharashtra with a touch of Goan sea salt. Stating that Indian consumers are open to experimenting, Ankur Jain says “A testament to this is the first-hand feedback we received from our consumers at the Bira 91 Taproom in Bengaluru where we introduce a new beer flavour – local and seasonal – every Thursday.” For Ankur, ‘Imagined In India’ is an attempt to bring together the many flavours of India and its creative energy is fueled by emerging artists, entrepreneurs, and startups.”

Goa-based spirit connoisseur Kimberly Pereira, brand ambassador for Maya Pistola Agavepura, finds the trend heartening: “We get to showcase Indian produce in homegrown brands. Given how vast our country is, every state can offer you something unique and it’s great for the farmers as well.” Moonshine Meadery announced the launch of a campaign to crowdsource the next label for its Hibiscus Ginger Mead. Rehani says, “We have worked with some amazing artists for our labels and are super kicked to see the options for our latest offering.” Its first crowdsourcing campaign in 2020 saw over 500 entries for the label design of its Grilled Pineapple Mead. Artists who have created labels for the brand include the founder of Junglegym Studio Nikhil More, graphic novel artist Anand Radhakrishnan, visual artist Aniruddh Mehta, album art illustrator Sachin Bhatt, architect and a graphic designer Sagarika and illustrators Karan Kumar and Sneha Dasgupta. “The Meadery is also supporting indie bands in Pune with BYOH (bring your own headphones) events for groups of 20-25 people,” says Rehani.

Great State Ale Works too worked with artists across India for their Millet Beer Series. For every bajra ale brewed, the brand used the vision of a different artist to reflect the work of the farmers. ‘Beyond Your Wits’, a Belgian Witbier, wears a limited-edition label designed by Sam and Zeenat Kulavoor of BombayDuckDesigns. ‘Equal Opportunity’, a Bajra Blonde, uses Tanya George’s bilingual font type label. ‘Dryland’, Brut Bajra Pale Ale is designed by Orijit Sen.

The Imagined in India series by Bira91, gave local artists an opportunity to infuse their spirit into the specially designed spirits with indigenous ingredients. Ankur Jain explains, “The first touchpoint for consumers with a brand, is packaging and design. For the series, we collaborated with Kulture Co., a curated platform spearheading the new wave of Indian Graphic Art.” Artists Ranganath Krishnamani, Osheen Siva, M. Sajid and Prince Lunawara helmed the artwork. “The reason for partnering with different designers for packaging was to make sure that just like the taste, the design of each beer has a different story to tell,” he shares.