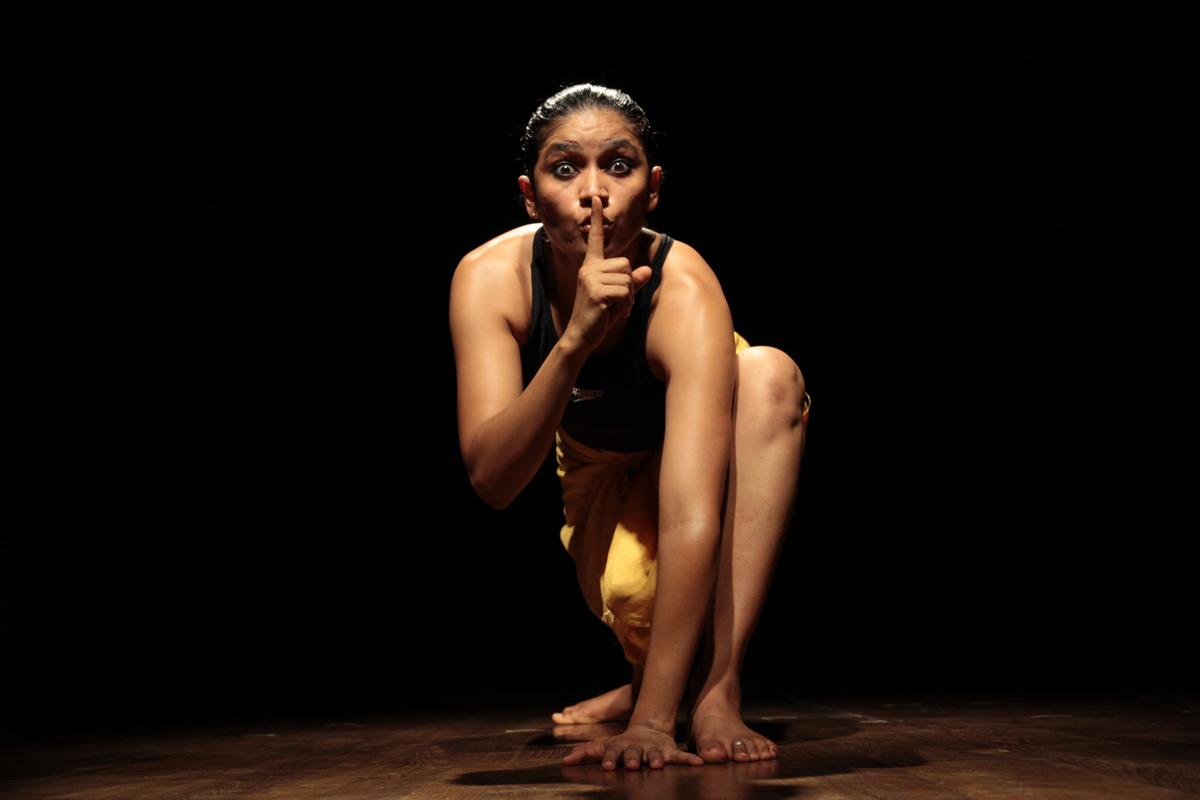 Their journeys have been different. While one began with a strong foundation in dance, the other experienced an exciting theatre life in college. But, the two have met up at a significant juncture. Nimmy Raphel says meeting her mentors, the late theatre doyen Veenapani Chawla, and the current artistic director of Adishakti Laboratory for Theatre Art Research Vinay Kumar, was the turning point in her life; whereas Sharanya Ramprakash says that her entry into the world of Yakshagana, and being mentored by guru Sanjeeva Suvarna changed the direction of her theatre voyage. The two women are the recipients of this year’s Shankar Nag award given to young theatre artistes.

Struggles are part and parcel of an artiste’s life, but they see creative potential even in them. When the doors of Adishakti opened for Nimmy (she is the administrative head and resident actor), she initially found it difficult to grasp the complex ideas shared by Veenapani and Vinay.

From the play The Hare and The Tortoise.
| Photo Credit: Special Arrangement

“I did not know theatre. I hadn’t seen a theatre production or worked collaboratively and complemented another actor. When you learn dance, everything is so choreographed, you don’t have to worry about giving and taking enough energy, which is a concept I learnt from theatre. All those questions and notions I needed to understand for myself, those were the things I initially found difficult. It’s like a patinated pot that has to be polished so that it shines more and more. I am striving always for that state,” says the actor with a two decade-long career, whose foundation in classical dance was laid in Kerala Kalamandalam.

The creative crisis that urged Sharanya to go back to Manipal in 2014, where she had done her college and run a hugely popular theatre group. It’s then that she encountered Yakshagana, a form done by and for the farmers and watched by them. “With 400 performers across the region, the area was ablaze with performances the whole night. People didn’t come to see the stories from the Mahabharata or the Ramayana because they were familiar with them. They came to see how they were interpreted. Through the epics they would talk about the now, and in an elaborate costume, using vachika and percussion. I also found it improvisatory. I knew this was the form I was looking for!” The Bengaluru-based artiste, who runs a theatre group called Dramanon, went on to train at Udupi Yakshagana Kendra for two years. ‘Akshayambara’, her play, an outcome of that, urged the audience to address the nuances of gender and performativity through conversations between a Yakshagana artiste and a contemporary theatre actor, who share the same stage. Interactions with different social groups, and discovering gender identities and art forms have shaped Sharanya’s work. For instance, in her play ‘Nava’, born from her collaboration with Aravani Art Project, the personal stories of a cast of transgender women influence the structure of the play, expanding proscenium’s language. “It discarded the idea of the skill entirely in the way we understand it; they do performances in different ways, but something we don’t recognise on stage as skill.” Adishakti has always subverted the mainstream narratives around the Indian mythologies, delving into the human conflict. Nimmy’s directorial ventures too reflect this. Her upcoming work will be on Urmila from the Ramayana. “When we look at a lot of our mythologies, women are not talked about so much. They have been put on a pedestal as devis. But, when we pray to the gods to understand us as human beings, how can they, if they do not experience the same thing? How can they be compassionate? Art gives you that liberation to pick these characters and ask these questions.” The Indian stage has always been fluid enough to accommodate these questions, but it has also become fragile due to its struggles amidst the forces of cinema, and now, the digital age. Economic liberation is the key, stresses Nimmy. “There is not much funding in this field. It is still not a viable medium, it can only be viable if I know that I can support at least myself as an individual. Especially, when our exposure to things is much wider, and there is a flood of information and images, how do you find your own voice without imitating something you see? Our only saving grace is the live presence of the actor, that makes us slightly different from the wondrous thing that cinema offers. Then, as theatre practitioners, conversation should be: how do you make yourself interesting? How do you unearth things that are interesting to watch? Because the world of cinema is too mesmerising.” From one of the plays staged by Nimmy Raphel and team.
| Photo Credit: Special Arrangement

The pandemic has had a stronger blow on the theatre scene, Sharanya points out. “Theatre after the pandemic is going to be new. I hope people find new kinds of definitions.” And, in this transition, actors have become more aware of their mental and physical spaces. “I see groups working very differently from the way they used to before. Practices have changed. It’s an interesting time, with another kind of creative crisis for the community. But it is an exciting one. We had become complacent, I feel this is a good jolt,” says Sharanya.

The writer is a theatre practitioner.