Navarasam’, a song originally released on January 19, 2017, by Kerala-based rock band  Thaikkudam Bridge on YouTube, is back in the news. More than 2 million people have re-discovered the video in 2022 after the release of Kannada blockbuster  Kantara.

Thaikkudam Bridge has gone to court saying ‘Navarasam’ and  Kantara’s ‘Varaha Roopam’ sound similar. The comments section on social media is a slug fest between fans of both sides, with occasional posts calling for quiet introspection and giving credit.

People have loved the deeply affecting ‘Navarasam’, and the video, directed by Littil Swayamp, who is an editor and cinematographer too. The video narrates the  Navarasas through a Kathakali dancer couple and their young child.

Swayamp, 34, has been in California since 2019 — he moved after doing the cinematography on the 2018 Fahadh Faasil-starrer Varathan, and has also worked with director Anjali Menon and musician Ricky Kej. He says he can only “find it fascinating” when others use “our methods and techniques to create art for themselves or find their audience”.

In an email interview, he speaks about creating the ‘Navarasam’ music video and the current controversy. Edited excerpts:

When you saw ‘Varaha Roopam’ from Kantara, what did you feel?

When I saw ‘Varaha Roopam’ on YouTube for the first time, it reminded me of ‘Navarasam’. A few friends told me Kantara is a good film. I’m looking forward to watching it soon. I wondered if the film’s makers had watched what we had done for ‘Navarasam’ before they got into production…

A whole new set of people now seems to be rediscovering ‘Navarasam’ and ‘One’ by Thaikkudam Bridge. The songs have aged very well and the visuals are still contemporary. How did you approach ‘Navarasam’? 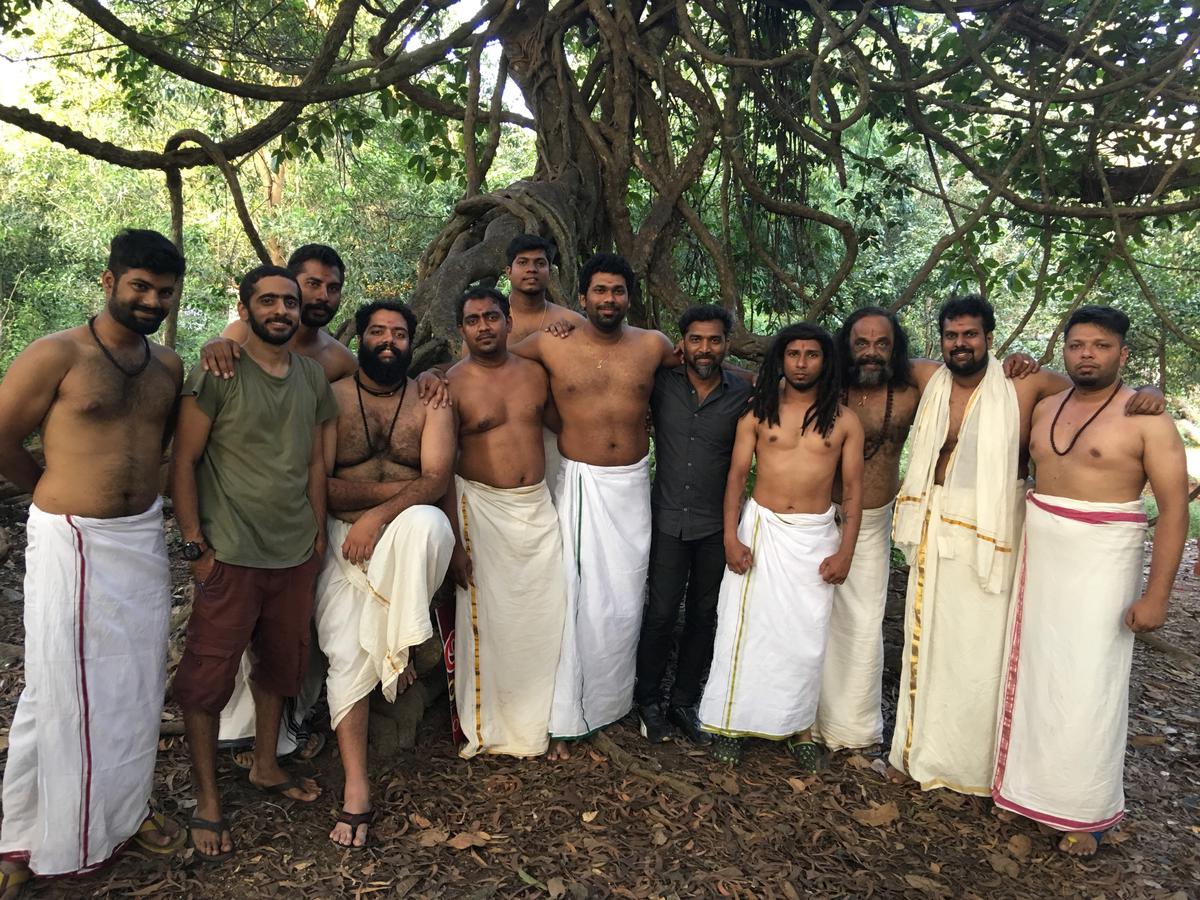 Littil Swayamp (2nd from left) with the members of Thaikkudam Bridge during the making of the ‘Navarasam’ music video.

Govind [Vasantha] from  Thaikkudam Bridge played ‘Navarasam’ for me before the shoot of ‘One’. Following the success of ‘One’, I was asked if I would be interested in doing ‘Navarasam’. It took me a long time to decide. I knew the track was strong and I needed to justify it with a firm story.

Formulating the concept and treatment took a couple of months. The casting process took over a month. I visited various Kathakali artists, shows and schools in Kerala. I also travelled to Kannur to find suitable locations. The scene where the boy falls into the well was crucial, and we had to hire a professional stunt master. We shot for five days. I was let down into the well with the camera to capture the scene. During all this, I was stressed and unwell and doubted if I would finish the project. That night, I had a dream where an abstract form of a Kathakali artist showed up and told me not to mess this up and voiced that I could do it. The next day we finished the shoot.

I was trying to capture the best I could, and the child actor, Prayag, and the rest of the cast and crew helped me convey the story through their performance and support.

How did you visualise the song, colour schemes and the mood — from utter mirth to heartbreaking sorrow? 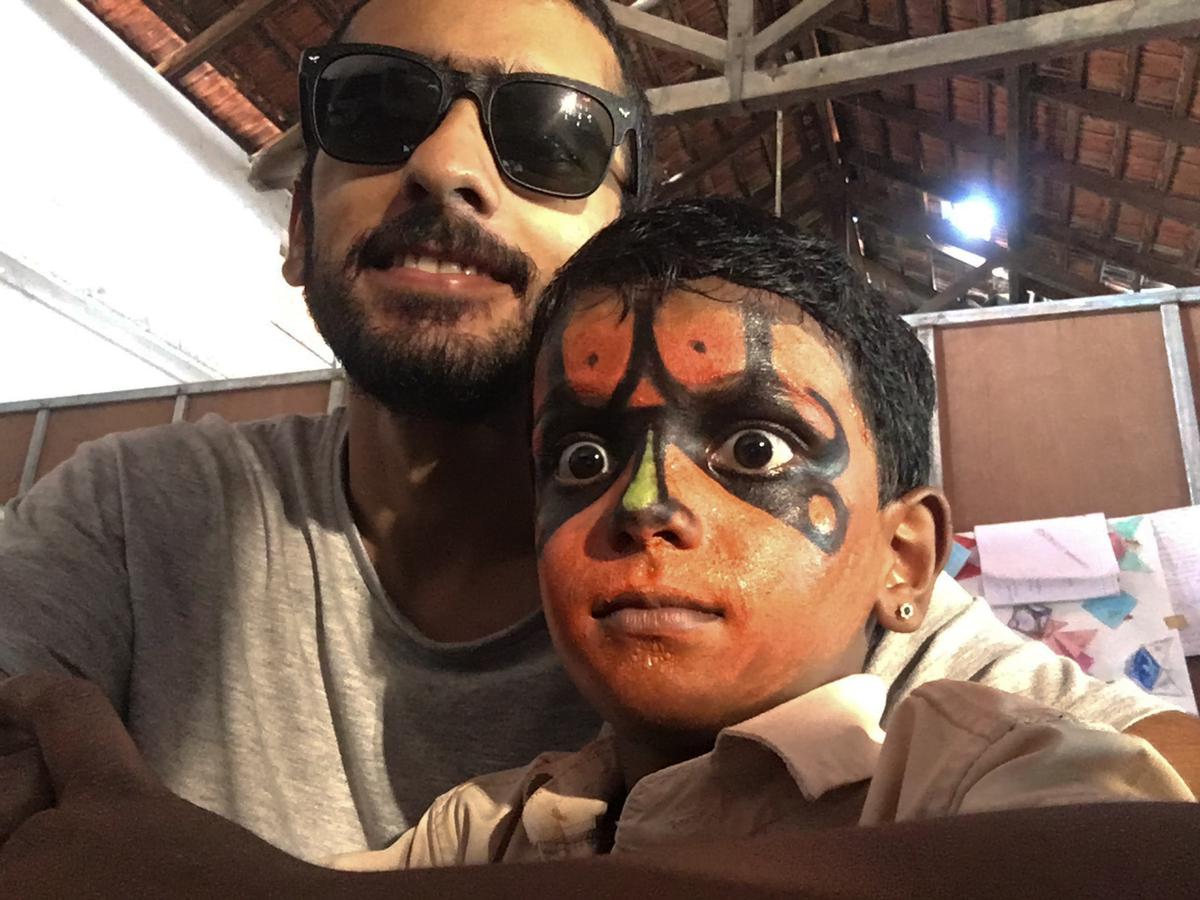 All the different Kathakali characters had unique colour palettes; visually, we wanted to complement the gods with natural surroundings. The mood was to have it earthy. For instance, the family performing together depicted ‘Bali Vadham’, the killing of Bali. The green colour on the child’s nose was a reference to Hanuman. Lord Krishna is the saviour in the end, which expresses hope. I wanted to be true to the gods.

When the child falls into the well, I visualised the art form being buried or blended into the earth. Heartbreak and sorrow are all part of the cycle of life. Something new can also be born.

What are your thoughts on music that is inspired? How strongly do you feel about intellectual property rights (IPR)?

Sound and music significantly impact our hearing senses, so much so that it moves people from within. The process of being mentally stimulated to do or feel something creative happens from the moment we are born.

When it comes to rights relating to creation and artists’ projects, I need to become an expert on the legalities to have a say. It is a vital way to protect artists’ rights over the creations of their exceptional minds. IPR has pushed artists to discover the undiscovered. I see it as being respectful of the creator.

As its creator, how does ‘Navarasam’ move you now? A still from the ‘Navarasam’ music video.

‘Navarasam’ is very close to my heart. Though it was a long process, personally, it was one of the most challenging years of my life; sometimes, I see that ‘Navarasam’ child in myself. It taught me a lot and gave me the courage to not give up and keep searching for answers — whatever the challenge.

You straddle three very distinct fields — direction, editing and cinematography. How do you manage to stay objective and not let one interfere with the other?

I mostly do different roles only when I have a limited budget. It gets a lot more complex when I also have to produce my projects. I have conversations with myself from different perspectives. It’s constant problem-solving among variables of time, quality and money; the process of striking a balance is the challenge. What ultimately matters is what comes on screen in its final audio/ visual form. So I gather the strength and patience to do my part within the given resources, even if that means cleaning the floor after pack-up. And, in time, I’ve found my peace in various avatars.

Could you tell us a bit about your journey?

I am from Kerala. My dad is from Nedungapra, and my mother was from Kochi. She passed away when I was six, and many different families raised me. I’d lived in 45 different houses by the time I finished high school. I absorbed the different relationships between people, as I had many families. I moved within India, and later went to Dubai and California. I now live in Los Angeles. I still make films when I get a chance. I’m learning and exploring technology and other mediums related to cinema and storytelling. I like being a student.

Who are your creative influences and what is your work ethic like?

Since I moved a lot as a child, only a few houses initially had a television. And it was mainly Doordarshan; one of my uncles had a B&W Onida TV. But, it would rain often and electricity would get cut. I used to watch whatever I could; the language did not matter. My Dear Kuttichathan was a huge influence on me as a child. And old Malayalam movies too have had a great impact.

When it comes to my work ethic, I take time seriously. If there is a sunrise shot, we as a crew must be there on time; the sun will not wait for us. We can’t stop time unless someone falls in love.

Any particular reason you moved abroad? And, are you still interested in working in Indian films?

I moved to California to do an Audio Engineering programme. I wanted to learn more about sound to be a better editor. And to explore new and upcoming technologies. I still do advertising films for clients. I have also been working in the film industry in Los Angeles.

When it comes to Indian cinema, if an exciting script or story comes by in the future, I will be more than pleased to work on it.

The consultant writer from Mangaluru has been covering the entertainment beat for two decades.