Homeentertainment‘Mili’ will be different from ‘Helen’ in terms of performance, says director Mathukutty Xavier about the Jahnvi Kapoor-starrer
entertainment

‘Mili’ will be different from ‘Helen’ in terms of performance, says director Mathukutty Xavier about the Jahnvi Kapoor-starrer

Director Mathukutty Xavier talks about his journey with Mili, the remake of the Malayalam film, Helen. The film is releasing on November 4

Director Mathukutty Xavier talks about his journey with Mili, the remake of the Malayalam film, Helen. The film is releasing on November 4

He is just one film old. But filmmaker Mathukutty Xavier is upbeat about Mili, the Hindi remake of his Malayalam film, Helen (2019). The movie, headlined by Janhvi Kapoor, is produced by her father, Boney Kapoor, and has music by AR Rahman. It is releasing in theatres on November 4.

“I believe I have done my best,” says the director over a call from Mumbai. “There were several offers to remake the film, but they had suggested several changes in the narrative. I did not agree to that because we [Mathukutty, Alfred Kurian Joseph and Noble Babu Thomas] had put so many years into writing that script. I agreed to helm the Hindi remake because BK [Boney Kapoor] wanted it to be exactly like how we made it in Malayalam. We just had to set it in a different milieu,” says Mathukutty.

He did have a lot of apprehensions about stepping into Bollywood. “Helen was a small movie and I was worried about artiste management in Bollywood. Language was also a problem for me. But Janhvi made it easy for us. She gave me the confidence to do it the way I wanted to,” says Mathukutty.

The survival thriller revolves around Janhvi’s character Mili Naudiyal, a young nursing graduate, who lives with her father. A waitress at a fast-food joint in a mall, she plans to migrate to Canada. One night she accidentally gets trapped inside the cold storage of the fast-food joint and her ordeal thereon forms the crux of the story.

Mathukutty mentions that Janhvi had watched Helen once and he did not let her watch it again. “I didn’t want her to come prepared. Even though there are no structural differences between Helen and Mili, the contrast would come in the performances. Just like we did with Anna [Anna Ben who played the lead] in Helen, we asked Jahnvi to read out the dialogues at the time of the shoot. If she or any person on the set found the lines odd, we would change it. I wanted the scenes to be organic,” he explains.

The filmmaker says that it was Jahnvi’s performance in the anthology, Ghost Stories, that made him say yes when Boney Kapoor said that he wanted to do the film with his daughter. “At that time, I had not seen her performance in Dhadak [Janhvi’s debut film] or Gunjan Saxena: The Kargil Girl. ”

Mathukutty adds that he was particular about not having any other big name in the cast because he “didn’t want anyone to overshadow Janhvi’s character. At the same time, I needed solid performers for other roles. That is why artistes like Manoj Pahwa, Sunny Kaushal, Anurag Arora and Sanjay Suri are in the cast.”

The filmmaker adds: “BK had suggested Manoj sir to play Mili’s father and I immediately said yes because I loved his performance in Article 15 and Mulk. He handles humour and intensity so well and we needed that in Mili. When Sunny’s name came up to play Mili’s boyfriend, I felt that he was right for the role having seen his work in Gold. Anurag sir [who played a notable role in Delhi Crime] is among those actors who have not got their due in spite of their calibre. As for Sanjay sir, he has been absent from the scene for a long time and I was looking for such an actor to play this righteous cop. Also, I was blown away by his performance in the short film Call Him Eddy,” he says. The surprise element, he says, is the actor who is cast in Vineeth Sreenivasan’s role in Helen.

The screenplay and dialogues have been adapted into Hindi by Ritesh Shah. “He adapted it into simple Hindi and I learnt the full script before the shoot started. Two assistant directors helped me out with the language during the shoot. Noble, our creative director , knows Hindi and that was a bonus,” Mathukutty says. He had quite a few Malayalis behind the scenes as well. Like Kochi-based cinematographer Sunil Karthikeyan, who is making his debut and make-up artiste Manu Mohan, who worked with make-up artiste Ranjith Ambady in Helen. “We had an all-Malayali camera crew with Sunil. Thanks to them, certain Malayalam words and sentences became popular on the sets. Like, after the shots they would ask each other, focus kittiyo? (Did you get the focus?). Eventually, Janhvi started asking, kittiyo? after her shot!”

A graduate in animation and graphic design, Mathukutty quit his job to do films. After that he met Alfred Kurian Joseph, his kindergarten classmate, and the duo started writing scripts. Noble Babu Thomas, who played Anna’s boyfriend in Helen and co-produced the movie with Vineeth Sreenivasan, joined them.

Helen won the national awards for best film of a debut director and for make-up. Anna Ben won a special jury mention at the Kerala state film awards. While the film has been released in Tamil as Anbirkiniyal (2021), it is getting remade in Telugu and Kannada.

Mathukutty is the co-scriptwriter of Alfred’s directorial debut, Philip’s starring Mukesh and Noble, which is getting ready for release.

Mathukutty adds that even though he was quite chilled about shooting in real minus temperatures having done it already in Helen, things did not go as expected. “I had contracted COVID-19 and so my immunity was weak. I was down and out for nearly a week. Janhvi too fell ill after shooting in that temperature,” he says.

It was Boney Kapoor who wanted Rahman on board as the composer. He has composed five songs, with lyrics by Javed Akhtar. Rahman has crooned one song as well.

Mathukutty adds that his entry into Bollywood happened at the time when the whole world was raving about Malayalam cinema. “The timing was perfect. They keep talking about Dileesh Pothen, Fahadh Faasil, Minnal Murali, Hridayam…” 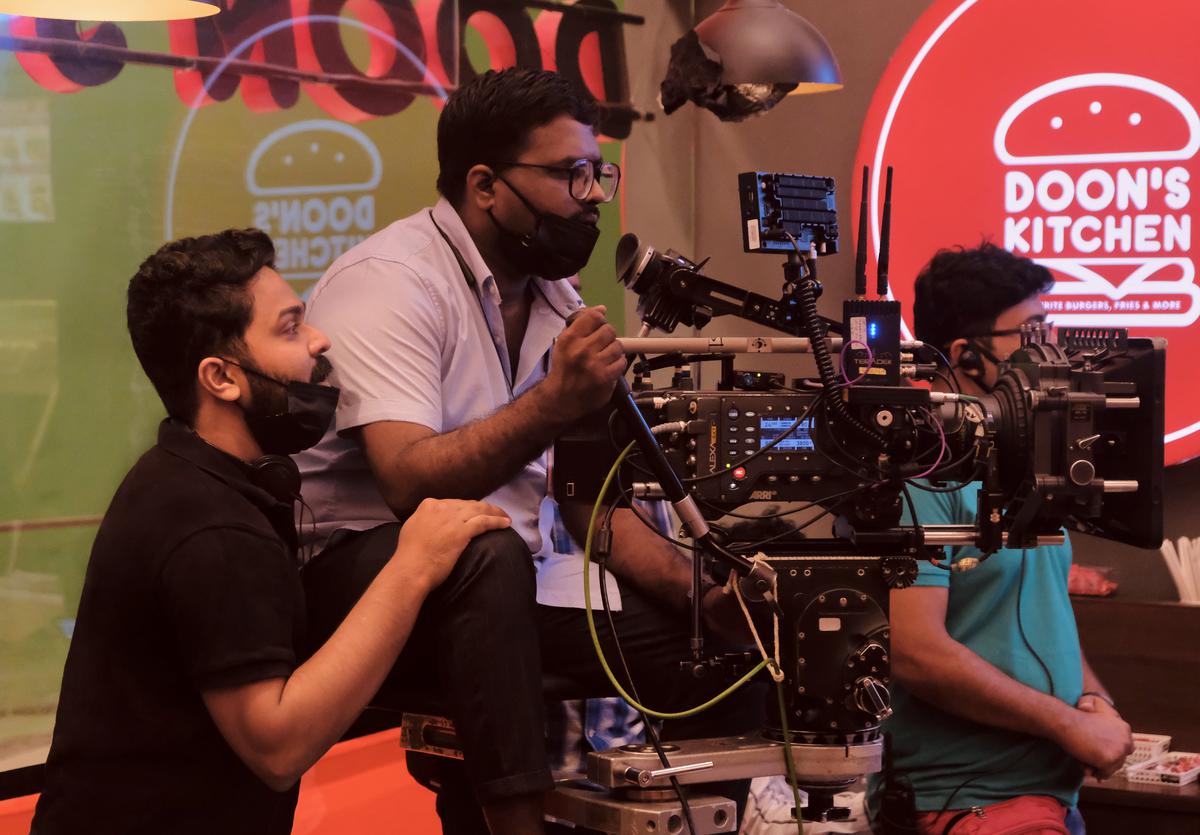 On a new turf

However, Bollywood is a different world altogether. “If I had 10 people to manage something in Helen, there was a bigger group to do the same thing in Bollywood. Film promotion was not easy. There is so much pre-release buzz and I have been at a loss, especially when people ask questions in Hindi. Jahnvi has come to my rescue often.”

At the same time, he is worried about Hindi films not doing well at the box office these days. “I don’t know if this is the right time to release this film. But then you can’t predict what would work with the audience.”

Meanwhile, talks are on about his next project. “Enquiries are coming in from Bollywood as well. But I haven’t decided anything. I am waiting for the people’s verdict on Mili,” he signs off.