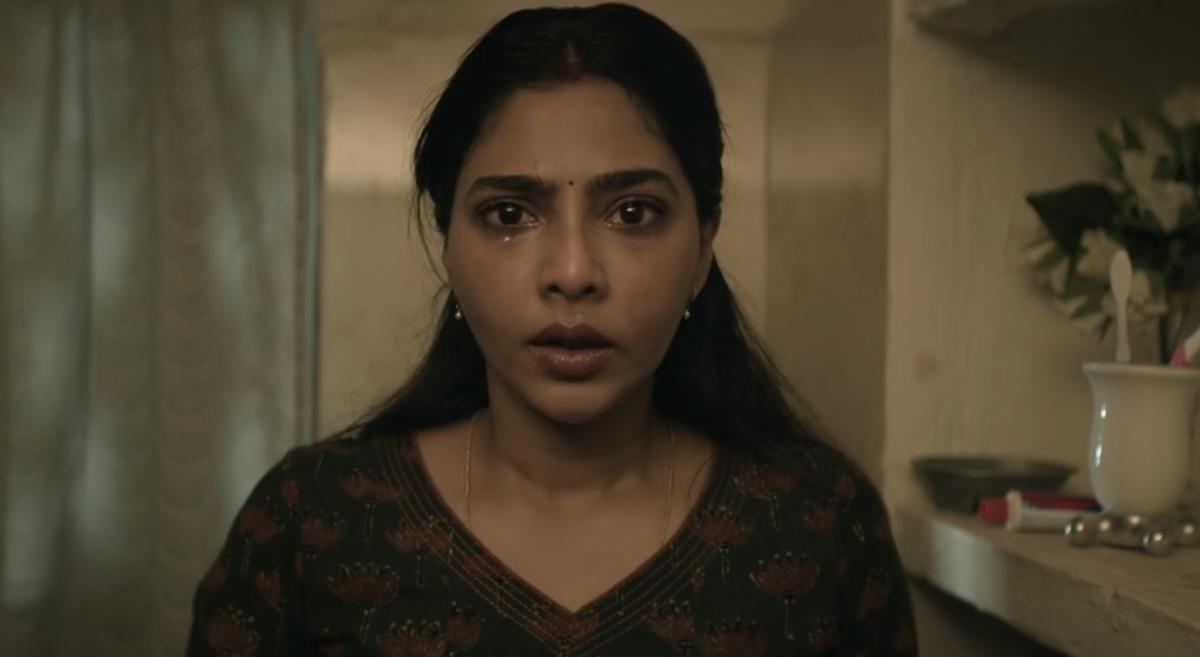 There’s a popular quote (most recognised from The Usual Suspects) that goes like this, “The greatest trick the devil ever pulled was convincing the world he didn’t exist.”

Not sure about the devil’s existence — maybe the quote is true — but it does serve as an allegory on the predatory behaviour that is prevalent among controlling, toxic masculine men in our society. Men, like Naveen Chandra’s character Ravindranath in Ammu, might appear like white knights to society, hence nobody ever suspects that their capes are only meant to conceal the blood on their hands.

Storyline: Follows a young woman’s struggles and fight against her abusive cop husband

A blatant, up-close report on such behavioural patterns and the cycle of abuse at the hands of such men are few of the many laudable aspects of director Charukesh Sekar’s film. The very first introductory sequence of the film manages to tell a lot. We see the hands of a woman light up candles one by one; the light eventually reveals her to be Ammu (Aishwarya Lekshmi), a 25-year-old getting ready to meet her groom, Ravindranath. Like the flame shining bright on her glowing face, the resilience, love, and hope that she has in her heart, do add up to her beauty. She wouldn’t have known then that she would go on to spread that spark of resilience to many around her.

Ravi becomes a dotting husband to Ammu, and she thanks the stars for such a loving partner. From the society’s point of view, Ravi is a dutiful cop who cares about the well-being of the citizens. As one might expect, things go south and this happens rather out of the blue. One day, Ammu forgets to take Ravi’s lunch to the police station — she isn’t aware that it was expected of her — and Ravi takes this to heart. How did such a loving man turn into this, you would wonder, but this only adds up to how cleverly manipulative someone like Ravi can be. It works because this is how rapidly the world seems to have changed for Ammu as well, and this is a film that is meant to make one look from the eyes of the victim and not the perpetrator. More such instances follow, and she fails to take note of the red flags. Things escalate swiftly, and Ravi begins to physically assault Ammu.

Despite progressing like a slow-burn drama that might instantly remind one of The Great Indian Kitchen, the film touches on many pivotal points through some effective dialogues and scene-writing. Be it the conversation between Ammu and her mother, the scene featuring Raghu Babu in which Ammu holds onto the idea that her love can change her husband, the dialogue that speaks for the right a woman holds over her body, or the way Ammu tells a bunch of policewomen that they forgot to investigate her house and that she is being abused… the film gives us plenty to ponder about. Further, it infuriates us to see how helpless Ammu’s situation turns out to be, and that there are few options available.

But the biggest discrepancy comes in how Charukesh chooses to give a resolution. A convict on parole named Prabhu (Simha) is used as a tool to attain this, and these portions turn out to be rather unconvincing. We know little about Prabhu other than the fact that he killed two people, that he is on parole to attend her sister’s wedding, and that he regrets the crimes he committed. However, is that truly enough for us to take his quest seriously? Also, for a film that was painting a realistic portrait of abuse, such gimmicky turns of events don’t work in its favour.

Despite the shortcomings though, Ammu manages to move you, and Aishwarya Lekshmi’s performance deserves a lot of credit for it, as she eases through even the most vulnerable of moments. Take note of how your heart strings tug during a close-up that shows her applying make-up over her wounds. Similarly, Naveen delivers quite an effective performance as Ravi; for instance, the scene where he pulls off a tremble on his cheeks when Ammu asks him a yes or no question.

Despite its poor third act, the writing of the first two is such that you might still find yourself searching for answers and closure. For invoking that in us, and for everything else it stands for, Ammu is a win.