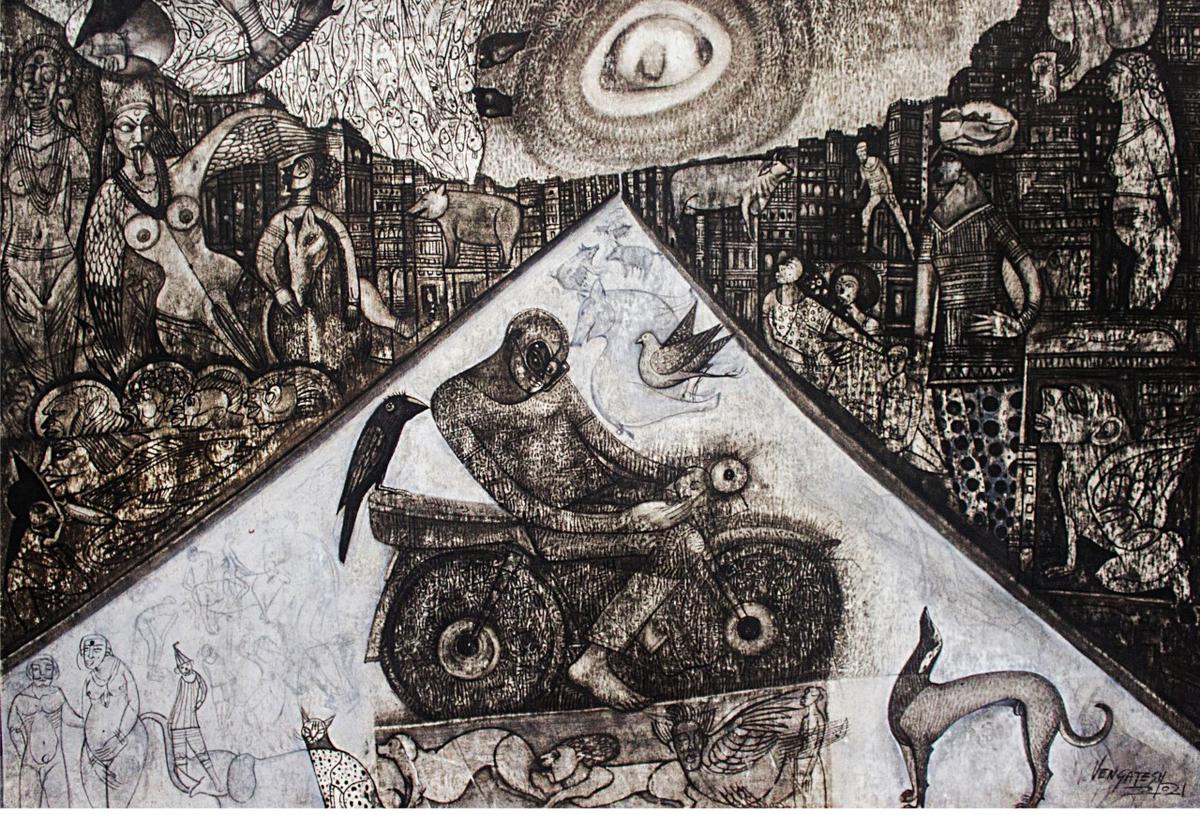 The caste system in India does not paint a rosy picture, so why expect those at its receiving end to do so? The artworks at Vaanam — the ongoing Dalit art, literature and theatre festival — question the idea of identity and existentialism through art and aesthetics. In bold strokes, intense colours, and various shapes, the perspectives of nearly 22 artists stand expressed as paintings and sculptures at the Varija and Kadambari galleries of DakshinaChitra Heritage Museum. Co-organised by Neelam Cultural Centre, an initiative of filmmaker Pa Ranjith, the exhibition aims to “grapple with the disturbing reality of caste discrimination”. The museum’s curator Gita Hudson says it is the first such exhibition at the museum since its 25 years of existence.

At the entrance of the gallery, K Natarajan’s wooden installation sets the tone of the exhibition, which he curated over a span of one month. The installation shows human species turning back to apes; a reflection of devolution sparked by intellectual and moral decay in a society plagued by the politics of exclusion. “We are a collective of Dalit and non-Dalit artists who showcased our works revolving around Dalit art in April at the Vaanam Art Festival organised by the Neelam Cultural Centre for Dalit History Month. It was there that the chairperson of the DakshinaChitra Heritage Museum invited us to exhibit the artworks at the galleries here,” says K Natarajan.

He feels that the exclusion of caste identity from mainstream art, including art fairs, biennales, and top galleries, has birthed an illusion of a casteless country, which is far from reality. The paintings at the exhibition acquaint the viewers with these uncomfortable realities. For instance, Ajay Kumar’s artwork showcases a pack of wolves setting fire to the huts in a village. It reminds one of the 2012 Dharmapuri violence where an dominant caste mob allegedly set fire to about 268 Dalit houses in Natham. However, the artist says that it is inspired by the Kilvenmani massacre. “In fact, I am writing my first graphic novel, called Venmani, which is also based on the incident. The elements in this painting and the treatment of the landscape will be featured in the novel too. It will be released in a year or so,” says Chennai-based Ajay Kumar. SR Solairaj too paints a poignant perspective of the massacre. The centrepiece of his painting is a conflagration that shows a palm full of grains.

There are other drawings too, especially those by Oviyar Chandru. With surgical precision, Chandru uses texts and drawings to create a satire on the socio-political canvas of the country. His work on ‘beef politics’, which shows Kamdhenu in a glass box with ‘For export only, cultivation in India’ written on it, is particularly engaging.

Films, plays and talks this weekend

Talks
11am: Emergence of Dalit History through fiction by K Ragupathi
12noon: Indian society viewed through the lens of Ambedkar by AB Rajasegaran

The dialogue of caste politics is nourished with spirituality in the works of Rajasekar that reflect on the Buddha and Nature. “In these times, no one wants to shy away like in old times. Artists want to exhibit their artworks with pride as they are sure of their skill and bank completely on their honesty,” says Gita.

She reads out a small note displayed right outside the gallery: “Narrative paintings by Dalit artists that speak about caste issues cannot be mere abstractions… They are expressions of innate subconscious feelings of creators. Though Dalit artists are merely anxious to learn and be part of the mainstream art, the art generated by them stems from acute levels of bigotry developed from the sufferings of caste atrocities by the dominant castes…”

The artworks are on view and for sale till October 30 at DakshinaChitra Heritage Museum; entry is free.