HomeBusinessExplained | Why has OPEC+ cut oil production? How will it affect India and the world?
Business

Explained | Why has OPEC+ cut oil production? How will it affect India and the world? What is OPEC+? Why have they slashed oil output? What is its effect on India and global relations?

What is OPEC+? Why have they slashed oil output? What is its effect on India and global relations?

The story so far: On October 4, the Organization of Petroleum Exporting Countries (OPEC) and its allies, known as OPEC+ slashed oil production output by 2 million barrels per day (bpd), boosting crude oil futures. As per reports, on the next day, the November crude oil futures on WTI were at $87.89, up by 0.15%, while December Brent oil futures were at $93.49, up by 0.13%

Even crude oil futures on the Multi Commodity Exchange (MCX) traded at ₹7,178, up by 0.18% and November futures were trading at ₹7,138, up by 0.15% on October 5. The reduction in production will be implemented from November, as decided by the OPEC+ meet in Vienna.

While Saudi Arabia – one of the founding members of OPEC — claimed that the output (equal to 2% of global supply) cut was prompted by the weakening global economy and interest rate hikes in some western countries, U.S and its NATO allies have accused the group of ‘colluding with Russia’.

Here’s a look at the most influential oil cartel, reasons for oil output slash, Western backlash and effect on India:

Founded in 1960, the Organization of Petroleum Exporting Countries (OPEC) initially comprised of Iran, Iraq, Kuwait, Saudi Arabia and Venezuela as its founding members to ‘unify and co-ordinate its member nations’ petroleum policies in order to secure regular supply of petroleum to consumers and a fair return to investors’. Countries like Qatar, Indonesia, Libya, the United Arab Emirates (UAE), Algeria (1969), Nigeria, Ecuador, Gabon, Angola, Equatorial Guinea and Congo later joined the group. However, Ecuador, Indonesia and Qatar suspended their membership in 2020, 2016 and 2019 respectively – reducing the strength to thirteen countries currently.

In 2016, OPEC+ was created with the OPEC member nations allying with ten other oil-producing countries Russia, Azerbaijan, Bahrain, Brunei, Kazakhstan, Malaysia, Mexico, Oman, South Sudan and Sudan – inflating the group’s strength to twenty-three. While the OPEC Statute states that ‘any country with a substantial net export of crude petroleum, which has fundamentally similar interests to those of Member Countries may be admitted under special conditions’, the formation of the OPEC+ group was seen as a response to protect their interests amid the rise of the U.S. shale industry.

The group effectively controls more than 79% of the world’s crude supplies, regulating oil prices as per its interests.

In its first face-to-face meeting since the start of the COVID-19 pandemic, the OPEC+ cut oil production by 2 million bpd starting in November, stating that the decision was based on the “uncertainty that surrounds the global economic and oil market outlooks.” With OPEC countries like Russia, Venezuela and Iran facing Western sanctions and Nigeria and Angola having output issues, the real cut would be 1.0-1.1 million bpd.

The higher oil prices could increase inflation and cost of living for countries buying their oil using US dollars. The United States, which is scheduled to go to mid-term polls in November, will be hit majorly by this production slash, leading to soaring inflation – thus hitting US President Joe Biden’s already low approval ratings.

The US had increased its interest rates and sought three-phased sanctions on Russian oil to limit Moscow’s funds to wage war in Ukraine. As per the G7’s plan, the first set of sanctions will target Russian crude oil, while second one will focus on diesel and the third will tackle lower value products such as naphtha. Facing global condemnation for its invasion in Ukraine and heavy economic sanctions, Russia has already ‘indefinitely closed’ Nord Stream 1, an underwater gas pipeline, after leaks were noticed in a stretch of pipe near the Island of Bornholm in the Baltic Sea. This pipeline supplied European stated with 25% of their total Russian gas imports. Russia, which supplies European Union (EU) countries with 40% of their natural gas, has been steadily reducing its supplies since the EU levied heavy economic sanctions on Moscow. While EU has claimed the pipeline was sabotaged, Russia has denied responsibility.

With oil prices soaring in European nations and US tackling rising inflation, the OPEC+ oil production cut helps Russia tackle the NATO. Kremlin spokesman Dmitry Peskov hailed the move as “balanced, thoughtful way to oppose the actions of the US. This at least balances the mayhem that the Americans are causing”.

The oil production slash comes months after Mr. Biden’s visit to Saudi Arabia and met with Crown Prince Mohammed bin Salman, in a bid to dissuade the block from lowering oil output. However, despite White House’s diplomatic efforts, Saudi Arabia has neither condemned Russia’s war on Ukraine and has now aided Moscow in inflating oil prices, leading to rise in consumer prices in US.

Mr. Biden, who has steadily been losing popularity ahead of the mid-term polls in November, has time and again been targeted by the Republican party for his failure to curb gas and food prices in U.S. Struggling to maintain control of the U.S. Congress in the upcoming polls, Mr. Biden has promised “consequences” for Saudi Arabia in retaliation to boost oil prices. To curb oil prices, US is mulling releasing it shale oil reserves.

His administration has stated that it will be reassessing ties with the kingdom. US-Saudi ties, which had soured since the murder of US journalist Jamal Khashoggi, have further soured with Saudi Arabia’s refusal to condemn Russia and provide any energy commitment to the US. How will this affect India?

India – which imports over 95% of its crude oil consumption — is confident of navigating the spikes in energy prices due to the oil output cut. While India and many other nations were expecting a one million barrel per day cut in supply, the 2 million bpd cut has taken large parts of the world by surprise.

“We are very confident of being able to navigate through the situation,” said Union Petroleum and Natural Gas Minister Hardeep Singh Puri adding that it remained to be seen how this would play out. He discussed possible rise in energy prices exacerbating the movement towards recession, which would in turn lower oil demand. However, he added that India was scrutinizing the move very carefully.

India’s oil imports from Russia hit a record high in June as Moscow offered major discounts for its oil amid Western sanctions to boost its Rouble. While Russian oil accounted for about 16% for India’s overall imports in April-August, a five-fold increase from last year, the purchases from Russia fell 2.4% in September. Currently, Saudi Arabia has emerged as the second-biggest oil supplier to India while Iraq maintained the top spot. 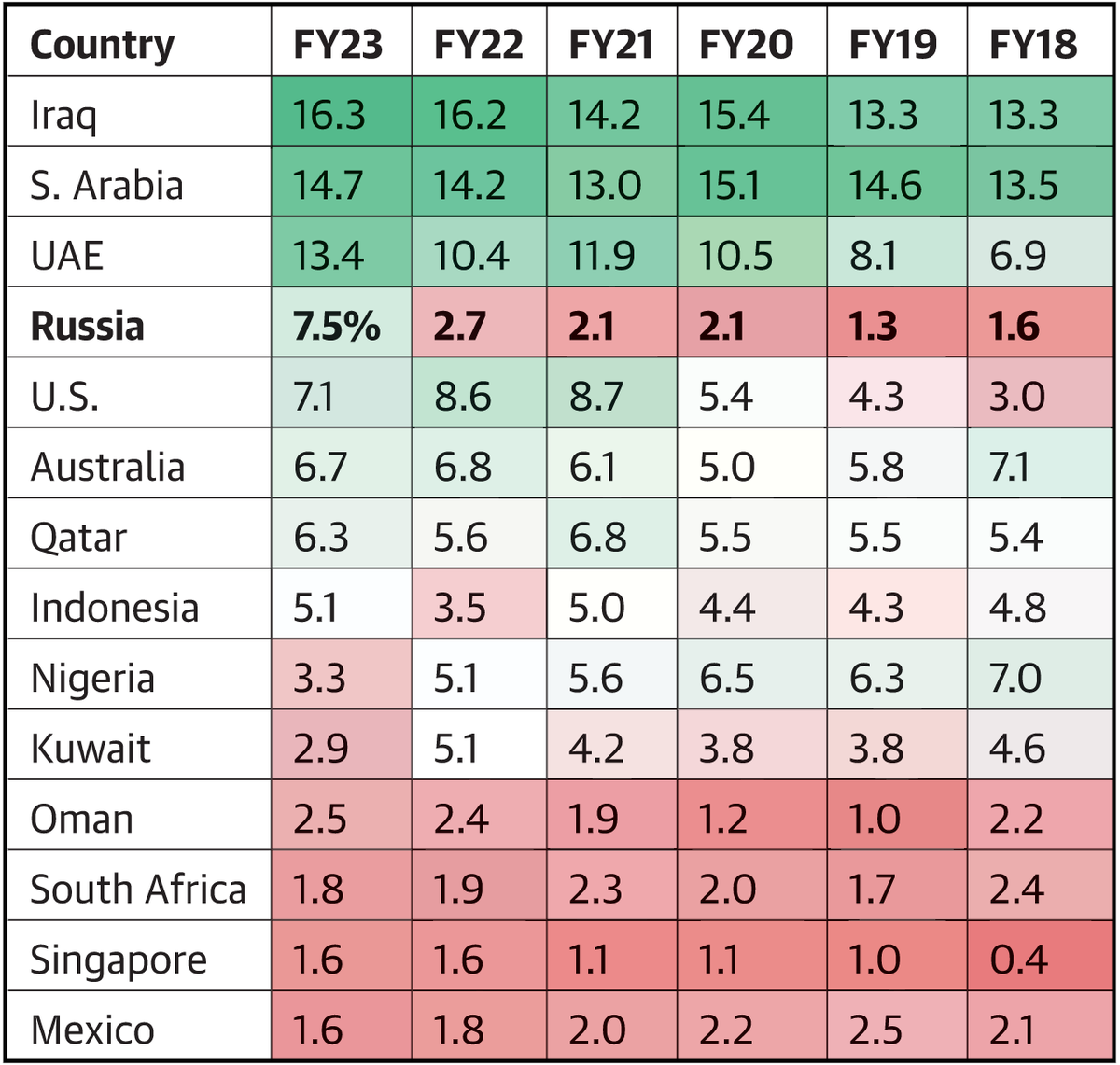 India has become Russia’s No. 2 oil buyer after China as others have cut purchases since Moscow’s invasion of Ukraine in late February. The next OPEC+ meeting will take place on Dec 4, after the oil cuts kick in.