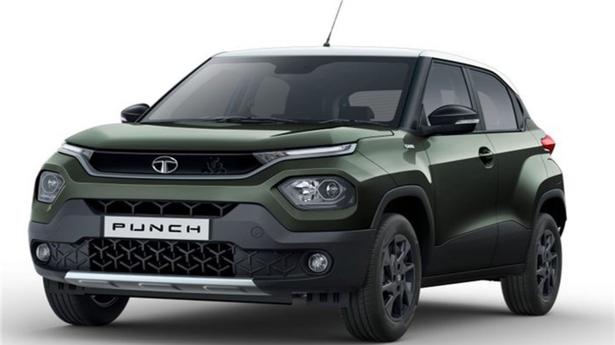 
Tata Motors has launched the new Punch Camo Edition, starting at ₹6.85 lakh and going up to ₹8.63 lakh (ex-showroom, Delhi). The Camo Edition is the second special edition of the Tata Punch after the Kaziranga Edition. The Punch Camo Edition gets exterior and interior cosmetic updates, but remains mechanically unchanged to the standard model.

As was the case with the Harrier Camo Edition, the biggest talking point about the Punch Camo Edition is its new Foliage Green exterior paint shade. It also gets a dual-tone effect, with the roof finished in either Piano Black or Pristine White.

At the front, the chrome trim underlining the grille has been blacked out and there is a new silver skid plate on the bumper. The dual-tone wheels on the standard model have been completely blacked out on the special edition as well. There is also a ‘Camo’ badging on the front fender.

On the inside, the Punch Camo Edition gets a new military green shade for the dashboard and the seats are wrapped in new camouflage upholstery.

The Punch Camo Edition is available on the mid-spec Adventure and Accomplished trims, which can be further spruced up with the Rhythm and Dazzle packs, respectively. The Camo Edition also brings down a few features from the top-spec Creative trim, offering them as standard. These include the 7.0-inch infotainment system with Android Auto and Apple CarPlay connectivity, 16-inch alloy wheels, a reverse parking camera, LED DRLs, push start/stop button, cruise control and front fog lamps.

The Punch Camo Edition continues with the 1.2-litre, three-cylinder naturally aspirated petrol engine that produces 86hp and 113Nm of torque, and is paired to either a 5-speed manual or an AMT gearbox.