HomeLifestyleAmateur astronomers from Coimbatore are at India’s first Dark Sky Reserve in Hanle, Ladakh to document the night sky
Lifestyle

Amateur astronomers from Coimbatore are at India’s first Dark Sky Reserve in Hanle, Ladakh to document the night sky 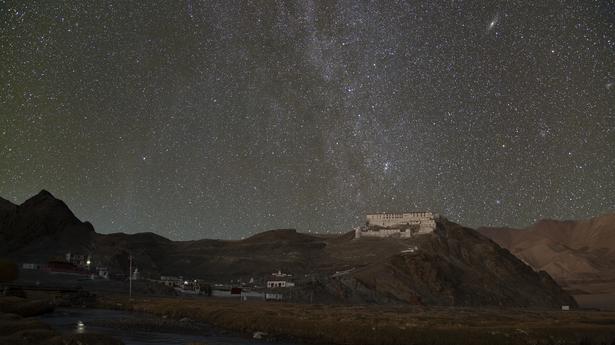 Amateur astronomers from across the country, including cities such as Coimbatore and Bengaluru, are taking part in the first stargazing trip to Hanle, Ladakh — India’s first Dark Sky Reserve

Amateur astronomers from across the country, including cities such as Coimbatore and Bengaluru, are taking part in the first stargazing trip to Hanle, Ladakh — India’s first Dark Sky Reserve

As a first in the country, a Dark Sky Reserve tag will soon be given to Hanle in Ladakh, a village about 4200 meters above sea level in the Himalayas. “The Dark Sky Reserve is a space protected from lights to preserve the pristine night skies,” says Obuli Chandran, a science educator from the city, adding that it is similar to the status given to places such as tiger reserves, protected spaces for preserving the forest.

Obuli Chandran, along with Ganesh Raja M and G Aishwarya, a three-member team of amateur astronomers from Coimbatore, are taking part in the first stargazing trip to the magical Hanle Dark Sky Reserve (HDSR) from September 23 to September 28. The Indian Institute of Astrophysics (IIA) and Bangalore Astronomical Society (BAS) are jointly organising the trip led by Dorje Angchuk of IIA, and Keerthi Kiran, Vishwanath SK, and Sudhash Natarajan of BAS. They are carrying an eight-inch, 10-inch and 12-inch Dobsonian telescopes, famously known as the light buckets, along with several binoculars to scan the skies.

Hanle, located in a rain shadow region, hardly receives any rainfall and has clear skies almost two-thirds of a year. It is a high altitude dry cold desert. This is also why Indian Institute of Astrophysics has set up its telescopes, like the Himalayan Chandra Telescope (HCT) among others, up there. The HCT is located in one of the highest astronomical observatories in the world.

The objective of the trip is to make people appreciate astronomy, says Obuli. “The night sky holds wonders beyond our imagination. At Hale, you can see a star at every inch of the sky. We want to bring back those images to show people what a clear, dark sky can unravel and the need to preserve it. Another equivalent of such clear skies can perhaps be seen at the Thar desert in Rajasthan.”

He says historically the skies have always been looked upon by people across civilisations with cultural significance. As cities grew, lights began to flood them. “The beauty of the night sky was obscured from our view. But all is not lost yet. There are regions far away from city lights, from where the magic of the night sky can sweep you over. And the Himalayas is one of the finest places in the world that offers pristine clear skies that both amateur and professional astronomers yearn for,” Obuli explains.

The team will observe and document celestial objects. Says Keerthi from BAS, “Our group will observe and photograph astronomical objects and study nebulae and galaxies. In this digital age where photos are modified beyond recognition, we will attempt to observe the objects directly through our eyes and the telescope. This may not be possible from Coimbatore or Bengaluru or any other city/town”. Some members will be imaging the night sky using dedicated astrophotography gear. Vishwanath SK of BAS explains, “As astrophotographers, we want to capture the brilliant colours of the beautiful nebulae and galaxies and photograph the night sky along with the beautiful hills, monasteries and telescopes in Hanle.”

The Hanle Dark Sky Reserve will not only protect the darkness of the skies for astronomy research, but also promote astronomy tourism, and help in the socio-economic development of the local community in a sustainable fashion. “The HDSR is training the local community to act as tourist guides to the night sky, providing them with telescopes, as well as with material that will reduce light pollution towards the observatory,” says Obuli.

The magic of night sky

A dark sky reserve requires a ‘core’ area that has clear sky without any light pollution, which can enable telescopes to see the sky in its natural darkness

At present, there are 20 dark sky reserves around the world, including the UK, France, US, Germany, New Zealand, Canada, Namibia, and Australia

Since Hanle already is home to the Indian Astronomical Observatory, it was important to preserve it for scientific purposes, says Dorje Angchuk from the Indian Astronomical Observatory, the field station of IIA. “Also, the community around Hanle who were earlier nomads is diminishing now. So, we thought it would be a good initiative to make them realise the importance plus have some earning by way of astrotourism”.

If all goes well, we can soon hope to have more dark sky reserves in the country. Adds Obuli, “People start appreciating wildlife and care for it more after they visit wildlife reserves. The night sky has always been a source of inspiration for the human race, and this effort is of great importance.”