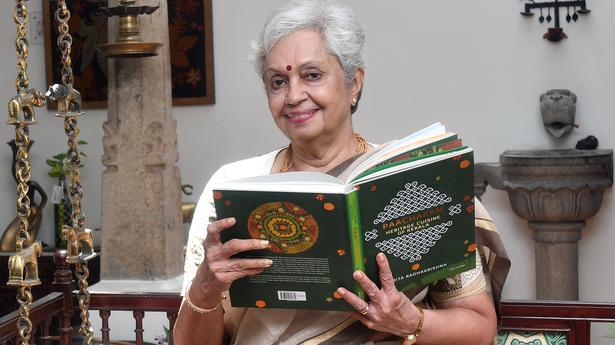 Octogenarian Sabita Radhakrisha’s fifth cookbook, ‘Paachakam’, covers the cuisines of Kerala, tracing the history of its various communities and their unique recipes

Sabita Radhakrisha’s fifth cookbook, ‘Paachakam’, covers the cuisines of Kerala, tracing the history of its various communities and their unique recipes

Sabita Radhakrishna, 80, dons many hats. She is a textile researcher, TV anchor, designer, playwright and cookbook author. In 2013, she founded an NGO, Udhavi (meaning Help in Tamil), to provide support and care for elders living alone. Through Udhavi, Sabita assigns volunteers to seniors to spend quality time with the aged, taking them out for walks or events, chat with them, read books, play indoor board games, write emails or run errands for them.

Her first cookbook, Aaharam ((Published by Zaika BPI India, 2000) on the traditional cuisine of Tamil Nadu, won the Gourmand World Cookbook Award — founded in 1995 by Edouard Cointreau, it honours the best food and wine books, printed or digital. She went on to write three more. She is now ready with her latest, Paachakam: Heritage Cuisine of Kerala.

“I approached Roli with the idea of a cookbook on the cuisines of Tamil Nadu covering the many communities that live here, and Annapurni was conceptualised and published in 2015.

Encouraged by the success of Annapurni, Roli Books commissioned Sabita to come up with a cookbook on the cuisines of Kerala the same year; it took her almost two years of research to complete the project, which was then further delayed by the pandemic. “I took this project up as a challenge, as I had minimal experience in the cuisine of this region. Once I researched the various communities in Kerala such as the Nairs, Thiyas, Syrian Christians, Moplahs, Cochin Jews, Poduwals and Namboodris, I began to understand the spices and cooking techniques and dominant ingredients used by each of them,” says Sabita, adding that she made trips to different parts of Kerala and even Dubai for her research. When she went to spend time with her son based in Dubai, she got to meet two cookery experts over there. “I learnt all about Syrian Christian and Moplah cuisine from two remarkable Kerala cookery experts in Dubai, with whom I spent a considerable amount of time cooking and observing their demo,” she says. “What fascinated me was how the cuisine features locally grown ingredients to make a variety of delicious dishes that are sattvic with less spice. Even the red rice they consume is loaded with health benefits” she says, adding, “The hallmark of the cuisine of Kerala is its simplicity and rich flavour.” Sabita had collected over 300 recipes and from those, curated the recipes for her book. “There are so many cookbooks in the market, but I ensured that Paachakam was my interpretation of Kerala cuisine, interspersed with some historicity and the communities that live there, and thus highlighted the culinary culture of Kerala segregated by the communities that influenced the diverse food culture of the region.”

Other cook books by Sabita

Aaharam: Traditional cuisine of Tamil Nadu, (Published by Zaika BPI India, 2000) Most of the recipes were by Sabita’s mother, which are Mudaliar recipes, and the book won the Gourmand award for the best cookbook of the year.

The Quick Cook: 60-minute menus (Westland Books, 2006) is a mix of traditional and modern developed by Sabita over the years, where the emphasis was on preparing the meal of three dishes in 60 minutes.

The book, illustrated by Nupur Panemaglor, has a thematic representation of the state of Kerala with sketches of the landscape, its flora and fauna, such as the backwaters, fish, jackfruit trees, the boats, monsoon and banana leaves, and is dedicated to Accamma Verghese, a friend of Sabita, who guided her though the project. “One of the cookery experts I consulted even taught me how to make toddy at home for use in vattayappam,” she says, adding that along the way she learned lots of clever ways to enhance flavour. “For example, they dry roast the grated coconut and then grind it for some recipes. Also, ginger and garlic are minced not ground to paste, and this lends a distinctive taste to the dishes. Similarly, coconut oil is sometimes added raw in certain dishes for flavour.” “When Roli Books commissioned me to write a cookbook on all four southern states, I decided to first take up the cuisine of Kerala. I took it up as a challenge as it was an alien cuisine which demanded intense research and coordination,” says Sabita. “I took up this project with a mission to reach out to the younger generation of Malayalis who are spread across the globe. I also want families to save, and cook, their family recipes.” It is keeping this in mind, Sabita had simplified and tweaked a few recipes, just to save on the time spent in preparation. “For example, when it comes to Kaachiyamoru, usually Malayalis split the garnish into two portions and add one portion to the dish and pour the other half as topping over the dish after it is prepared, but I just add the garnish at one go. I had also slightly changed the Kadala curry recipe as well.” “Even the Thalaserry Biryani, I have slightly simplified the process, yet it is a complicated dish to prepare. Wherever possible, I have aimed at simplification of the process just to save time as the current generation is always in a hurry,” she chuckles.

Paachakam is priced at ₹ 1,495, and available at all bookshops. To buy online, log on to www.cmykbookstore.com or www.rolibooks.com

The Hindu Business Line55 mins ago
4