‘Monsoon Raga’ movie review: A soulless celebration of love during the rainy season 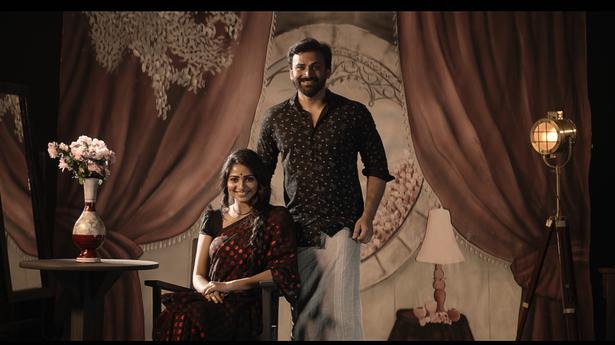 Despite commendable performances by the cast, the Kannada remake of ‘C/o Kancharapalem’ has been visualised with pure commercial interest, lacking the charm of the original

Despite commendable performances by the cast, the Kannada remake of ‘C/o Kancharapalem’ has been visualised with pure commercial interest, lacking the charm of the original

Mungaru means ‘monsoon’ in Kannada. It’s a season that many filmmakers prefer, since love stories set during the monsoon continue to be well-received by the audiences. Mungaru Male, the 2006 Yogaraj Bhat movie starring Ganesh, was one such film in which the monsoon showers were a metaphor for the melancholic protagonist. The film created history in Kannada cinema with its tremendous success, and the 2016 sequel Mungaru Male 2 also lived up to expectations.

Now, Monsoon Raja is director S. Ravindranath’s attempt to capitalise on this trend, and he employs the rain as a character in the film, that has been shot completely during the monsoon and most of the scenes have showers — real rain and not fake rain sets — as the backdrop. Like in the case of Mungaru Male’s title track, this film too has a melodious track set in the rain called Megharaajana Raga Hanigalaadante that is sung by Aravind Venugopal and composed by Anup Silin.

Storyline: A slice-of-life anthology set in a coastal town tells unconventional love stories with a backdrop of caste, religion, class and gender identity

Monsoon Raga is a faithful remake of the critically-acclaimed Telugu anthology C/o Kancharapalem by debutant Venkatesh Maha, which bagged various awards and was also screened at a few international film festivals. But the concerns of the makers of the original and the makers of the remake are poles apart. While the intention of original filmmaker Venkatesh Maha was to explore the concept of love when religion, caste, age, and gender insensitivity come in between human relations, this Kannada remake has been visualised with pure commercial interest, without addressing any of the issues depicted in the former.

While Venkatesh Maha employed real people from Kancharapalem, a neighbourhood in Visakhapatnam, to act in his film, Ravindranath reposes faith in trained, well-known actors. This shifts the focus onto their stardom rather than letting the content do the talking. The original, unlike this remake, was also rooted in the ethos of the land, language and culture.

The story, set in a small coastal town Gokarna in the Uttara Kannada district of Karnataka, delineates four characters, Katte, Raju, Joseph and Sundara, who crave genuine love in a region where, caste and religion dominate the life of the people.

The film revolves around the 49-year-old Raju (Achyut Kumar), an attender in a government office, and his friendship with his superior officer Hasini (Suhasini Manirathnam), who is a widowed woman and has a 20-year-old daughter. In the process of narrating the story of Raju and Hasini, Ravindranath also tells the story of Sundara (a 10-year-old school boy) and his friend of the same age Suchitra; Katte (Dhananjaya), a helper in a liquor shop, and Asma (Rachita Ram), a sex worker; Joseph, a henchman to the local lord and Raga Sudha (Yasha Shivakumar), a daring, straightforward girl form an orthodox family.

However, the director has also handled this deeply-emotional story with much sensitivity; we can see this in the dignified manner in which he presents the character of Asma, unlike all the clichéd representations that sex workers get in mainstream cinema. Rachita Ram appeals to the audience with her realistic look of a woman in the 70s with vintage puff sleeves and floral printed sarees. Suhasini Manirathnam, who shares the screen with Achyuth Kumar, steals the show with her classic approach to the happy, romantic character (a far cry from the emotional roles we often see her in these days).

Yasha Shivakumar also slips comfortably into her role as a college-going rebel girl, and there is a change for Dhananjya, who is known for portraying dark and conflicted roles. Here, he plays the role of an innocent guy with an extremely sensitive outlook for life. But Ravindranath includes a few unnecessary scenes to celebrate his new-found stardom. The cinematography by S K Rao, and Anup Silin’s background score need special appreciation for creating a organic feeling of the monsoon season on-screen.

All the ‘reel people’ (unlike the ‘real people’ in C/o Kancharapalem ) justify their roles, but the known faces take the sheen away from a story which could have captivated the audiences a lot more.