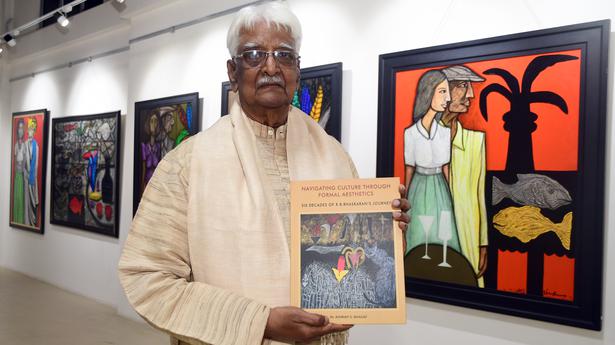 Artist RB Bhaskaran looks back on 60 years of being an artist, teacher and mentor as his biography launches amid an art show at the DOT School of Design

Artist RB Bhaskaran looks back on 60 years of being an artist, teacher and mentor as his biography launches amid an art show at the DOT School of Design

I reach 20 minutes early for my interview with art icon RB Bhaskaran. The 80-year-old artist, however, is 30 minutes early. “Ah,” he says, standing up with a smile, “Right on time.”

An influential teacher, former principal of the prestigious Government College of Fine Arts, former principal of the College of Art, Kumbakonam, and ex-chairman of Lalit Kala Akademi Delhi, Bhaskaran spent the last six decades bringing academic rigour and creative technique to the Madras Art Movement. Still an active mentor to the Indian art fraternity, he continues to emphasise the importance of discipline, structure and constant reinvention, on canvas and in life.

Which could explain why the launch of his biography, Navigating Culture Through Formal Aesthetics – S ix Decades of RB Bhaskaran’s Journey by Ashrafi S Bhagat, is being held at the DOT School of Design, at Ambattur Industrial Estate, instead of a popular city gallery, which would have been a more conventional choice. To accompany the launch, about 60 of the artists’ paintings, from his personal collection punctuate the college’s gallery walls with colour.

“I’ve come a circle,” he says, “I want to now give back.” The students are delighted: as he walks past their studio spaces they ask for advice and selfies. At the school gallery, he weaves between them as they study his work, pausing at his painting of one of his signature languid cats, done in his trademark quick, elegant lines, set against a saturated chrome yellow background.

Given his discipline, you don’t expect Bhaskaran to be subversive — but his paintings are joyous with a rebellious, unexpected fusion of techniques and sharp humour. “Painting is a grammar. People say with modern art you can scribble — you cannot. If you want your canvas to have a burst of energy, to come alive, you need to have the grammar,” he says, adding, “You have to have the technique. It is a part and parcel of creative expression today… Then, you need to experiment. I enjoy the experimenting.”

This zeal for learning the rules, and then bending them is what made Bhaskaran stand out even as a student. As a child, he would help the banner artists at his uncle, artist Namasivayam Pillai’s Bharath Studios. Between art college he learned how to paint frescoes in Rajasthan, and won a UNESCO scholarship at Inhod, Israel, where he learned printmaking. He went on to do workshops on printmaking in the UK. Over the years he also learned intaglio, lithography, ceramics, linocut, etching, screen printing and more. His canvases, therefore, evolved constantly. “You need to have a wider exposure. Even in art today, students must be multi-skilled to be able to become a product designer or a painter. Change must be continuous.” He admits that he is constantly restless: “I’m not satisfied with what I do. I have to move from one technique to another.”

True to form, he shrugs at the idea of art being cathartic. “No. I absolutely switch off from the world outside when I face a canvas. My process is separate. Politically, socially, culturally, things may happen — but I don’t bring them to my canvas.” He has also developed stoicism with age. “I lost my brother to the pandemic. I’ve lost so many friends over the years… But I realise, all this is a part of life…The emotion is between me and my canvas. I won’t leave a canvas or a sheet of paper till I get a satisfaction that the fight is over,” he says.

Though he speaks of his art as a struggle, it is evident he enjoys its challenges, dexterously juggling a variety of material, techniques and ideas. “In the Sixties, we had to buy cloth from Broadway and prepare it with paste for canvases. Today, you can do anything because there is so much available.” His painting titled Kingfisher, for example, started as a charcoal on canvas. “I put fixatives on top, and then painted with acrylic.” He points at a landscape, “There I used an oil bar.” He confesses he cannot stop buying art material. “I have the urge to play on large canvases. I mix mediums. I’m buying pastels, crayons, watercolours and oils…” However, he continues to work on just one painting at a time. “Incomplete work lies in the studio and haunts me sometimes. Early at 3 am, my imagination will fire, and I will understand how to complete it.”

Working from his studio at home, he exults in the luxury of painting for himself with no gallery deadlines to consider. “I am in no hurry. No-one is waiting for me. I am waiting…“ He smiles, pauses and continues, “I am waiting because my time is over. The fight has gone on for 60 years. Now I am at the fag end of my life, but I am not done. There are still canvases waiting for a dialogue with me.”

The show is on till September 18, 2022, at DOT Gallery, Dot School of Design, Ambattur Industrial Estate.