HomeLifestyleMahabali and the pappadam — a speculative flashback
Lifestyle

Mahabali and the pappadam — a speculative flashback 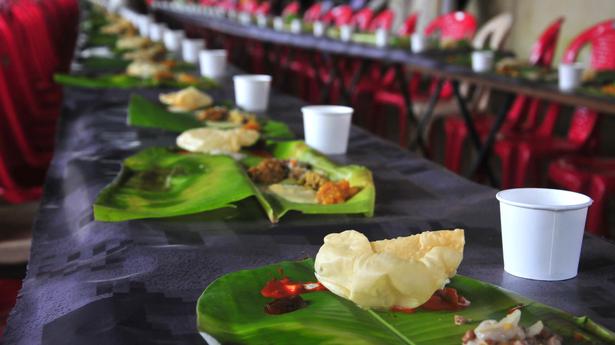 
This stream-of-consciousness yarn, spun on an impulse, was triggered by a recent news item and video doing the rounds on social media about a fight over pappadams at a feast in Alappuzha, Kerala, with the festive Onam season round the corner. Absence or shortage of pappadams, which have a rightful place in the top left corner of the traditional banana-leaf ‘sadhya’ of the Malayalee, led to a verbal spat that quickly progressed into fisticuffs, setting off this speculative flashback.

Statutory warning: This fib is not to be confused with mythology.

So, as the story goes, there once was this king, Maveli or Mahabali, whose rule was so munificent and egalitarian, taking care of everything every one of his subjects required or desired, that they had no worries or troubles or unfulfilled needs or aspirations, and gave no thought to after-life and didn’t bother to pray or worship their gods. The gods, in utter panic, convened an emergency meeting and decided something had to be done, and urgently, to get the people back to prayer and worship – because otherwise gods as a heavenly category supposedly in ultimate charge of everything would be rendered redundant and useless. After much divine deliberation they came up with a plan and entrusted Vishnu with the task of executing it.

And that brings Vishnu disguised as a Brahmin dwarf, Vamana, to Mahabali beseeching the king to grant him a parcel of land measuring just three steps for him to live on. Mahabali saw through the con game instantly, because there was no one in his kingdom who needed anything, least of all a tiny piece of land for a home, and everything about this Brahmin dwarf looked suspicious. He, nevertheless, played along and asked Vamana to go ahead and measure out the three steps of land he wanted. In the blink of one eye, and with a mischievous twinkle in the other, Vamana (aka Vishnu) grew to as much height as it takes to measure the entire earth in one step, all of the sky in the next, and then, one foot raised, looked at Mahabali, seemingly perplexed and irritated, as if to ask where the hell he was expected to place the third step to complete the full measure promised to him. This was typical Vishnu in over-the-top show-off mode. Because one step was all that was needed to cover all of Mahabali’s kingdom; there was no need really to proceed with the sky.

Anyway, to proceed with the story, Mahabali, to keep his word to Vamana (now showing his true colours as Vishnu), granting him the three foot measure of land, goes down on his knees muttering, “where the hell is right,” under his breath, and proffers his head to the figure looming large before him saying, “OK, get on with it, place your third step right here.” Vishnu then proceeds to place his foot on Mahabali’s head and push him into the bowel of the earth, called ‘pataala’ in Sanskrit and ‘hell’ in English, which was (and is) inhabited by demons. When only his head was left to go under, Mahabali cried out, “Stop! I want you to know I already knew who you were the moment I set my eyes on that fancy-dress Vamana; and that just because I was no pushover for any god because I gave my people a great life, you guys up there decided to push me under; and since there’s no one to call out this foul, I guess I have to go down. But before I do, I have a boon to ask of you for a change. I’d like to visit my kingdom and my people for about a week once a year in the Aashwin season (of September).” Pushing Mahabali into the earth was quite an effort for Vishnu in spite of his vishwaroopa (or XXXXXXL) size. So all he could manage by way of reply to Mahabali’s parting request was a panting grunt. Which Mahabali took to be a yes.

I’m sorry I haven’t yet come to where pappadam figures in all this.

So, to cut to the chase, come next September, when Mahabali resurfaced in his erstwhile kingdom, he was pleased to find that the people were eagerly awaiting him. The rule of the gods wasn’t going too well for them. This was driven home to Mahabali forcefully in the very first house he was welcomed into. As the hosts and numerous guests who had turned up to partake in the feast for their beloved ex-monarch sat in rows on the floor tackling the sumptuous spread before them on plantain leaves, a commotion broke out in one corner of the large hall. Mahabali heard the noise, but pretended he hadn’t, because he didn’t want to embarrass his hosts. But soon there was a group standing before him beseeching him to arbitrate on the quarrel. It had to do with the pappadam. More specifically, it had to do with the number of pappadams any one person could expect or demand in a sadhya. Mahabali was taken by surprise, and then overtaken by guilt, in quick succession.

Surprised, because there would have been no such issue during the golden age of his rule. It was then well known that each plantain leaf was entitled to four pappadams. It was impersonal, the entitlement. It was leaf-based. So if two persons were eating off the same leaf, they would have to share the four pappadams. This also discouraged communal eating out of the same leaf. There were enough and more leaves to go around for everyone. Of course, there were enough and more pappadams as well in Mahabali’s reign to appease appetites ad nauseam. The four-pappadams-per-leaf was a hallowed gastronomical principle. The pappadams were meant to be spaced through the meal as follows: the first with the opening course of rice and ghee and dhal, the second with the sambar, the third with the rasam and/or curd, and the fourth with the payasam and/or final top-up scoop of rice with curd. This was the fulsome, equitable fare in Mahabali-raj and there had never ever been any problem. Mahabali was surprised that there should now be such a fracas on this score – it had, after all, been a well-established convention.

But wait, did we say that Mahabali’s surprise was followed by guilt? Yes, because Mahabali also realised, just then and there, that he had broken his own rule. He had himself already consumed seven pappadams when the dispute erupted, and was two bites into his eighth when called upon to settle it.

A word here to explain why the king fell foul of his own rule. First of all, he was an ex-king and an exile. So, strictly speaking, the rule didn’t apply to him any more. But there was a more practical, compelling reason. You see, in paataal lokam, cooking oil is precious and rationed and not, as we would imagine, used for cooking anything to eat. As in occidental hells, oriental paataals too subject their inhabitants to regular deep fry in oil. That’s the third degree you sign up for when you go to hell. So while Mahabali had a fair idea of what it feels like to be a fried pappadam, he hadn’t been able to taste any ever since his ouster from his kingdom. So you understand why he went at it with such gusto at this feast on his first holiday back on earth.

Anyway, what was done was done, pappadams eaten were eaten. What was needed was to resolve the problem on hand and set a new norm to avoid unseemly pitched battles in the name of the pappadam in future. Driven partly by this call of good governance that comes naturally to a good king and partly by the there-and-then guilt, Mahabali was seized with, apart from the slight embarrassment in being caught red handed into his seventh-plus-half pappadam, he then and there declared that henceforth the quota of pappadams per plantain leaf – based on a new and more evolved gastronomical principle – would be seven and a half.

Mahabali may have been no king when he passed this decree. But his word was implicit law for the people. And so for many, many years thereafter, peace and tranquility prevailed at ordinary or festive meal times throughout the land. The soft crunch of pappadams in unison at communal feasts underscored the amity and bonding among the people. The pappadam pact stayed intact. Until, one day, the middleman of god-land, Narada, happened to narrate this anecdote to sundry gods lazing around on fluffy clouds – and all hell broke loose in heaven. How dare Mahabali interfere in our divine rule and misuse his post-regal visiting rights! The gods immediately set out to re-undo what Mahabali undid.

But that’s another story…