HomeBusinessExplained | Why is there divergence in inflation across States?
Business

Explained | Why is there divergence in inflation across States? 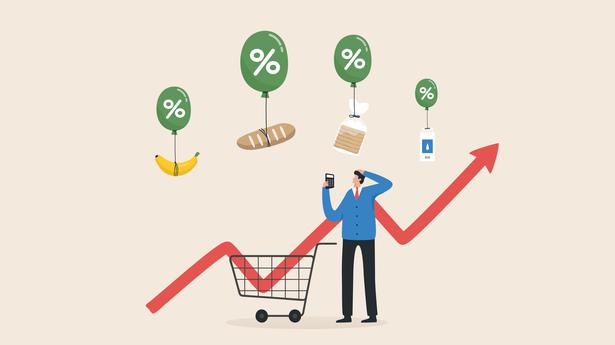 What are the local factors? How has it dented spending, particularly in rural India, which is facing more price pressures?

What are the local factors? How has it dented spending, particularly in rural India, which is facing more price pressures?

The story so far:India’s economy grew at a slower-than-expected 13.5% in the first quarter of the year. Private consumption picked up, but inflation has been a dampener. Retail inflation which shot up to an eight-year high of 7.79% in April, cooled slightly to 6.7% by July. However, in several States and Union Territories (UTs), including Assam, Andhra Pradesh, Gujarat, Haryana and Telangana, consumers continued to face over 7% inflation in July, while 11 States, including West Bengal, Uttar Pradesh and Bihar, saw accelerated price rise in the month.

Which States are seeing the highest inflation and where are consumers better off?

Inflation measured by the Consumer Price Index (CPI) crossed the central bank’s upper tolerance limit of 6% in January and has averaged 6.8% till July 2022. But an analysis of State-wise inflation prints for this period reveals that 14 States as well as three UTs, including Jammu and Kashmir, have faced higher than the national inflation, most of them averaging over 7% in the same period. While consumers in Telangana (8.32%), West Bengal (8.06%) and Sikkim are worst-hit with 8%-plus inflation, other major States are not too far behind, with some of them posting a spike in price rise in July. The average 2022 retail inflation so far in Maharashtra and Haryana has been 7.7%, followed by Madhya Pradesh (7.52%), Assam (7.37%), Uttar Pradesh (7.27%), Gujarat and J&K both of which have averaged 7.2% and Rajasthan (7.1%).

What explains the variations in price rise among the States?

Food price inflation that dropped to a five-month low of 6.8% in July, is a key differentiating factor for States’ inflation experience, explained Bank of Baroda chief economist Madan Sabnavis. States that are not major crop producers have higher food inflation as transport costs are added on, and those with predominantly rural areas also clock more inflation as the CPI for rural areas assigns a higher weightage to food, he pointed out. Indeed, rural inflation has averaged more than urban inflation at 7.07% from January to July, and 7.6% in the four months since it peaked at 8.38% in April. For urban consumers, inflation only crossed 6% in March 2022, has averaged 6.47% through 2022 and fallen 0.6 percentage points by July from its 2022 high of 7.09% in April.

Consumption patterns and divergences in different items’ price trends also influence variations among States. Tomato inflation dropped to 44% from 158.4% in June, while meat and fish price rise cooled to a 46-month low of 3% in July. As EY India noted in a report this week, inflation in petrol used for conveyance eased to a 32-month low of 0.3%, diesel turned negative for the first time since November 2019 at (-)2.4%, but LPG inflation hit a six-month high of 23% and kerosene touched an unprecedented 108.8% in July. That some States lowered their fuel taxes made a difference.

Why does it matter?

While the share of private consumption has spiked to nearly 60% of GDP in Q1 2022-23, this persistently high inflation has dented spending propensity, particularly in rural India that is facing more price pressures.

“Private consumption is improving, with urban demand getting support from contact-intensive services. Had it not been for high inflation and subdued rural demand due to negative real rural wage growth, private consumption would have grown faster,” said CRISIL’s chief economist Dharmakirti Joshi.

With the monsoon’s progress still uneven, there is anxiety about rural demand even as inflationary pressures will continue to cramp household budgets. Identifying what is driving inflation higher (or lower) in some States vis-à-vis others could help policy makers address those pressure points more specifically to provide lasting relief to consumers, apart from other broad-brush ploys such as interest rate hikes and trade curbs to cool prices of individual items. The Centre and States can co-ordinate to pinpoint and address the price triggers that may not be driven by global headwinds but local factors.