HomefashionTeachers’ Day 2022: Unlike India, THESE countries celebrate the day on different dates
fashion

Teachers’ Day 2022: Unlike India, THESE countries celebrate the day on different dates 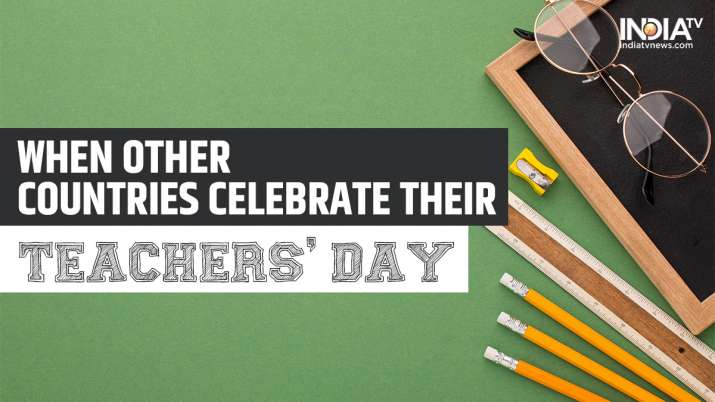 
Teachers’ Day 2022: India celebrates Teachers’ day on 5 September every year. This day is celebrated in dedication to the birth anniversary of former President Dr Sarvepalli Radhakrishnan. But, it’s not the same for other countries. People in different countries celebrate the occasion of International Teachers’ Day on different dates.

Many countries signed the “Teaching in Freedom” pact on October 5, 1966, at a special inter-governmental conference convened in Paris because of which International Teachers Day is celebrated on this day. According to UNESCO “The recommendation sets benchmarks regarding the rights and responsibilities of teachers and standards for their initial preparation and further education, recruitment, employment, and teaching and learning conditions.”

When do other countries celebrate their Teachers’ Day?

The United States of America used to celebrate Teachers’ Day on March 7, which later shifted to the first Tuesday of May in 1985 because the US has accepted the mandate in the Representative Assembly.

This day was started in the US after a teacher named Mattye Whyte Woodridge proposed ‘Teacher Day’ to be celebrated in 1944, and even shared the idea with the first lady Eleanor Roosevelt, wife of President Franklin D Roosevelt.

Chinese started to honour their teachers after a cultural revolution took place in China. The revolution changed many things in China as a result there were fewer intellectual workers, particularly teachers. After this, the government felt to increase the prestige of the teaching profession and refrain them from taking part in any revolution. As a result, 10 September is celebrated as Teachers’ Day there.

Latin American Countries like Colombia and Mexico used to celebrate Teachers’ Day on May 15. They was was especially celebrated because Jean-Baptiste de La Salle was appointed as the patron saint by Pope Pius XII. La Salle worked his entire life for educational reforms for the poor children in France.