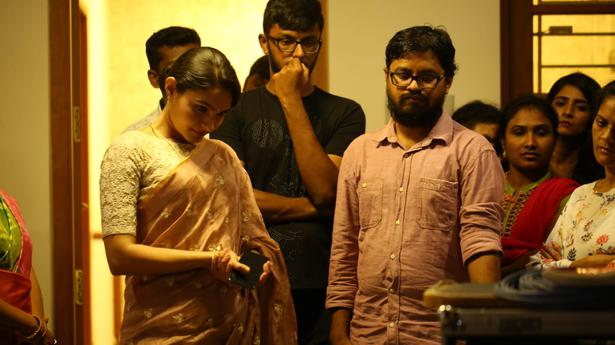 In Tamil film Vattam Parvathy’s (played by Andrea) dialogue ‘Naanga sollikittey thaan iruppom (we will keep reiterating it)‘ sums up the idea behind why director Kamalakannan set out to make this film. “The multi-plot thriller shows the male perspective in Mano (played by Sibiraj) while the women characters built around him stress about empowering women. His girlfriend wants to be an entrepreneur. His mother who works in the postal department talks of her missed opportunity at civil services because of the patriarchal mindset of Mano’s father. I built these elements in the screenplay to put women empowerment in spotlight. The story is by Srinvasa Kavinayam.”

Kamal says the film, streaming now on Disney Hotstar, kick starts a discussion around oppression of women across varying socio-economic strata. “I am happy that I have done my job of initiating the dialogue on the topic. I hope more women and men see the film and make the connect. I chose a thriller genre to get people hooked and make them ponder about patriarchy. It’s not a feminist film but a dialogue on feminism.”

Vattam shot in Coimbatore showcases landmark locations like the Avanashi Road underpass, as well as the Raja Street in Town Hall, the old part of the city complete with the thalluvandi shop there that sells piping hot idlis and mutton gravy well past midnight even now. “Cinematography by Shankar and Mathesh Manickam are a big plus. We wanted to show an urban Coimbatore, especially at night. It was challenging to capture the night shots. We erected poles to use street lights with extra lighting.”

The story involves around Mano (Sibi) who gets drunk on the eve of his ex-girlfriend’s (Athulya) wedding, kidnaps a businessman named Gautham (Vamsi Krishna) and eventually swaps Gautham’s wife Parvathy (Andrea) as the hostage. And, there’s another track involving a bunch of laid-off IT people. Life changes for all after a turbulent 24-hour that involves action scenes, a gorgeous car, and drone shots of a beautiful Coimbatore at night. “We hope the conversations on love and accepting from the film make an impact. It can happen when we start treating a fellow human being as an equal, irrespective of gender. I got the idea to highlight women issues based on real life incidents from my friend’s circle. More than 15 of my friends got a divorce because of the underlying male-female conflict, and the constant squabbles as a result of it.”

In Kamalakannan’s first film Madhubaanakadai, a tasmac bar played the protagonist. His upcoming film Kurangu Pedal is a children’s film. “From a tasmac bar in Madhubaankadai to car in Vattam, my next ride in Kurangu Pedal is on a cycle,” he laughs. “In Vattam, building the character arc, especially of Sibiraj was a great experience. We came up with different get ups, worked on his slang, voice modulation, followed by several rounds of reading sessions and rehearsals. ‘Nakkalites’ Prasanna appears for a single scene but leaves a lasting impact.”