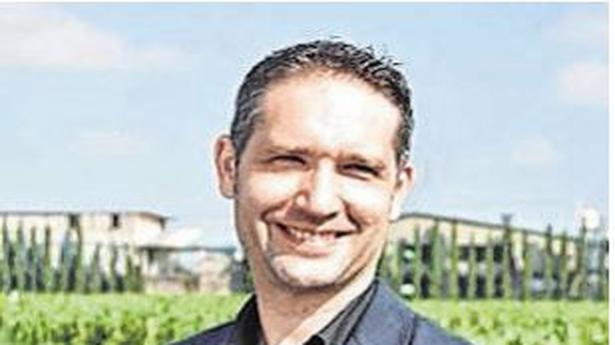 Bram Govaerts says the big challenge is how to feed the world, which arose because of climate change, COVID-19 and Ukraine and Russia conflict.

Bram Govaerts says the big challenge is how to feed the world, which arose because of climate change, COVID-19 and Ukraine and Russia conflict.

South Asian countries may see fertilizers scarcity in the next crop cycle as a result of the conflict situation in Ukraine and Russia, cautioned Bram Govaerts, Director General of International Maize and Wheat Improvement Centre (CIMMYT) and the Borlaug Institute for South Asia (BISA).

Dr. Govaerts, who is here to address a two-day high-level conference of South Asian countries on “Agriculture Research for Development,” said the big challenge was how to feed the world, which arose because of the three sub-challenges — climate change, COVID-19 and the conflict between Ukraine and Russia. The meet, which began on Thursday, is specifically discussing the foodgrain situation in Sri Lanka and the impact of the recent floods on Pakistan’s food security.

Talking to a select group of journalists, Dr. Govaerts said the world was seeing fragility on the food systems. On the Russia-Ukraine conflict, he said the world needed to dissect the impact of it. “The first impact was that 25% of the grains globally stuck not reaching the areas where it should have reached. The number two impact is on fertilizers. A lot of fertilizers is also coming from this area. But that fertilizer scarcity is going to impact only in the next growing season, but this will have an impact on the whole world not only in those areas that import wheat from the conflict-hit regions,” he said.

For the foodgrain shortage problem, he said India was potentially a solution as the country produced a lot of wheat. “But fertilizers will be a global problem. If the crisis goes up, it will be difficult to buy certain food items. Even if the conflict ends tomorrow, the conflict showed an underlying issue of how the food system functions globally. The system has no backup. We need to shift to resilience. We need to diversify by including millets. We need to look for medium term actions on how to be more fertilizer-efficient. We need to also look for longer impact and see how we can transform our food system into more resilient and efficient. If we don’t take these actions immediately, we will get shock after shock after shock. The problems will come faster and faster,” Dr. Govaerts said.

He said there were several policy changes that could be adopted to address these crises, but the key element was to stimulate investment in research and innovation. “This is a first crisis of humanity where we have so much data and information available, but we are not turning it into the correct information for policymakers, farmers and consumers. We need to set up systems to address these issues,” Dr. Govaerts added.

He said this crisis would go on for a while. “Even a short-term solution will take at least three years. We need to be more balanced in our responses. There are areas where we are over-supplying wheat and we have to optimise wheat use. There are areas we are underusing fertilizer and we have to be more efficient here. We need to optimise use of fertilizer. We need to apply exactly what it is required. Countries should start growing more of their crops in the country,” he said.

On the reports that a particular company got the benefit of the wheat export ban, he said we needed to decide what was the society we wanted. “2100 is not very far away. We have to create a functional food system. The system is fragile. We need to invest in local production and trade,” he said. “The challenge is how do we make sure that everyone has food and nutritional security as food systems are threatened by the climate change, COVID and the conflict,” Dr. Govaerts said and added that new innovations and new knowledge through agriculture research and development were key in addressing these challenges.