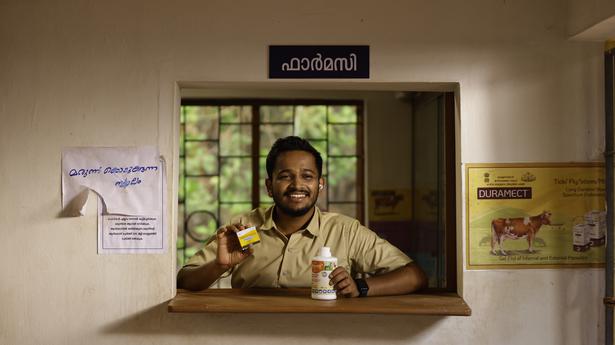 Basil Joseph’s attempts to coax a cat to give the right expression for the shoot of a music video have gone viral. Featuring animals on a ramp and a group of bubbly children, the making video of the song has become as popular as the song and the trailer of the film Palthu Janwar, in which Basil plays the protagonist, Prasoon.

After Jan.E.Man, a rollicking comedy, this is Basil’s second film in the lead. Releasing on September 2 for the Onam festival season, Palthu Janwar is directed by debutant Sangeeth P Rajan.

The techie-turned-filmmaker and actor says that the team behind the film gave him the confidence to take it up. “Produced by Dileesh Pothan, Fahadh Faasil and Syam Pushkaran under the banner of Bhavana Studios, the story, written by Vinoy Thomas and Aneesh Anjali, is rooted in contemporary Kerala but has a nostalgic feel about it. “It was the brand behind the film that led me to it,” he says.

Prasoon is a livestock inspector posted in a village in Kannur, where most residents happen to be families from Central Kerala who migrated many decades ago and settled in North Kerala as farmers and planters.

He feels that the background and location of the film would be a new experience for city dwellers. The rural ambience, greenery and characters are bound to strike a chord with viewers of all ages, he adds. “Most of us are used to buying our food. Palthu Janwar takes us to the villages to show where the food comes from, whether it is milk, eggs, meat or vegetables. Dairy farmers, a panchayat member, a veterinary doctor and a priest are some of the interesting characters in the film,” says Basil.

Shot at Irrity in Kannur, Basil explains that the settler families from Central Travancore have a different dialect and lifestyle that have not been showcased much in Malayalam cinema. It was the after the shoot of the film that Dileesh requested Basil to shoot for a song, which could also be used as a promotional video.

Dileesh wanted a video with animals and children sharing screen space as the song had the voices of children in it. After some brainstorming, Basil came up with a music video that is now trending. He was keen on shooting a video with animals but he knew that getting a menagerie in a frame would be difficult. “That is when I came up with the idea of a fashion show for animals and ended up directing some interesting creatures. I thought the cat would be the easiest. But, as it turned out, it was the most difficult to shoot,” he recalls.

When animals walked the ramp

Art director Ajayan Chalisery created the forest, garage and ramp for the shooting of the music video. The DOP was Sameer Thahir, who filmed Minnal Murali. Mashar Hamsa, the costume designer of Tovino Thomas-starrer Thallumaala, designed the costumes of the children and the animals featured in the song. Written by Suhail Koya, the music has been composed by Justin Varghese.

The team had to wait for the cat to finish its nap and was in the right mood to work. “Then it decided to have lunch and again took time to get the right mood! In the meantime, the other animals (dogs, pigs, cows, ducks, buffaloes and goats) were comparatively easy to work with,” says Basil. Even then, the shoot took two days to complete and was a challenge to all departments. Only one animal could be in the frame at a time. “They don’t behave as we want them to. So we had to wait till they gave us the look we wanted!” he recalls.

Basil has tasted success as an actor, but insists that he is happier with his identity as a director and that would remain his priority. “However, as an actor, now I am getting well-defined, layered characters with depth. Those roles have helped me become comfortable as an actor. Since Palthu Janwar revolves around my character, I have to ensure that the film moves smoothly. Becoming Prasoon has helped me evolve as an actor,” he believes. Until recently, most of his characters were comic ones that evoked laughter because of his body language or dialogue delivery. “The roles were those of supporting characters and one-dimensional. I would get stressed if my characters did not evoke the expected responses. The characters did not really move me as an actor,” he admits. However, his characters in Joji and Nna Thaan Case Kodu have won him applause

Meanwhile, the casting call has been announced for the next film that will have Basil in the lead. His next film as director will be released in 2023. “The story is complete and discussions are going. I will announce the title after we complete pre-production.”