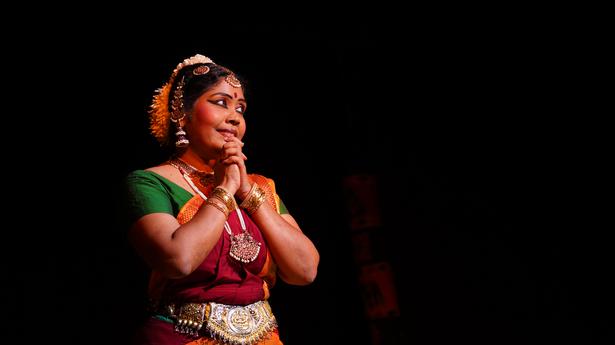 After watching the group performances on the first two days of Natyarangam’s ten-day festival, Uthsava Bharatham, it was time for the audience to enjoy a few solo performances by young artistes and a thematic presentation by seniors.

The third day featured a performance by Sangeeta Isvaran, who depicted the festivities at Tiruvarur temple through the eyes of a nayika, a Devaradiyar .

The dancer, through the margam, presented the aural, visual, and experiential aspects of the spectacle, portraying the emotions of the nayika, who is besotted by Thyagarajaswamy of Tiruvarur.

Amidst the sounds of the bells, chants, musical notes of the nagaswaram and thavil, she travels to Tiruvarur, where she sees the Lord in colourful robes, and glittering jewels. In a state of total surrender, she seeks spiritual union with him.

The depiction of the sthala vriksham, the majesty of the chariot, alankarams done to the deity, and the nayika’s experiences were some of the high points.

Sangeetha immersed herself so much into the character that she drew the audience into this journey.

The talented team of musicians enhanced the experience manifold — nattuvangam by Kaushik Champakeasan, mridangam by Guru Bharadwaj, violin by K.P. Nandhini, and kanjira and special effects by K. Sreenivas.

The depiction of the temple history, vahanas, and stories of the lord were explored in detail by Harinie, whose delineation revealed her potential and imagination. The varnam composed for the show gave ample scope for the dancer to explore in good measure both nritta and abhinaya.

Harinie’s dance sparkled with her attractive stage presence, commendable mastery over nritta, graceful movements, and phenomenal stamina. Though she expresses varied emotions with ease, she needs to keep a check on speed to ensure some moments of repose and restraint. Srikanth Gopalakrishnan’s high-decibel singing and overall volume of the musical ensemble were disturbing. Nattuvangam was by Sheela Unnikrishnan, mridangam by Guru Bharadwaj, flute by Muthukumar, violin by K.P. Nandhini, and veena by Anjani Srinivasan.

The performance on the seventh day of the festival was themed on Madurai’s Chithirai Thiruvizha and Azhagar Sevai. The festivities began at the foyer of the auditorium. From women being welcomed with malligaipoo, which was procured from Madurai, to the idol of Meenakshi being carried around the auditorium by women dressed in traditional attire, the team of four dancers — Roja Kannan, Priya Murle, N. Srikanth and Ashwathy (of Parashah) — left no stone unturned to recreate the festive ambience. The pomp and splendour of the Meenakshi temple, the vahanas at the festival, the celebrations including drawing of kolams and the bustling marketplace were depicted by a group of girls. The choreography of the sequences, use of props, music, and the costumes of Meenakshi and Shiva followed a routine pattern.

Given the experience of the four dancers, more variations in moods and movements could have been added. The finer details also needed some attention. The grandeur of the utsavam came through, but it did not have an emotional connect. Weaving each scene with engaging narration, through a mix of native Tamil and a dash of humour, Sasirekha Balasubramaniam, as the sutradhaar, regaled the audience.