Circuses across the country are going through a tough time. The Great Bombay Circus is no exception

Circuses across the country are going through a tough time. The Great Bombay Circus is no exception

“There is risk every day…one has to be careful. But I am not scared,” says trapeze-trampoline artiste Dorendra Singh, ahead of Great Bombay Circus’ (GBC) first show at Putharikandam Maidan in Thiruvananthapuram.

GBC has returned to Thiruvananthapuram after 14 years. There are three shows daily, each two hours long with 34 acts, which includes juggling, acrobatics, shooting, trapeze, trampoline, aerial acts, hula hoop, cycle tricks, sword-swallowing…. “The 7pm-show is always a favourite with the audience with the night lights on and additional performances thrown in, like the fire breathing act,” says troupe manager Jayaprakash PV, who has been a part of the circus for 33 years now.

There are hardly 10 circus troupes across the country and all of them have been struggling to keep their businesses afloat. With new avenues of entertainment available, the Big Top does not hold the same magic for the current generation. “Great Bombay Circus turned 100 in 2020, but we couldn’t celebrate it. The pandemic and lockdown left us high and dry. Shows restarted in last December,” says KM Sanjeev, who runs the circus in partnership with his elder brother, Dileep Nath.

Currently, GBC has 134 members out of which 64 are performers. They hail from Assam, Manipur, Bihar and Gujarat, in addition to some artistes like Sabina Maharjan, a hula hoop artiste and a fire dancer. “This is the third troupe I am working with. Bahaar se acha tho idhar hai (It is better inside this tent than outside). Of course, the training sessions are difficult. But life is all about overcoming obstacles and moving on,” says Sabina. 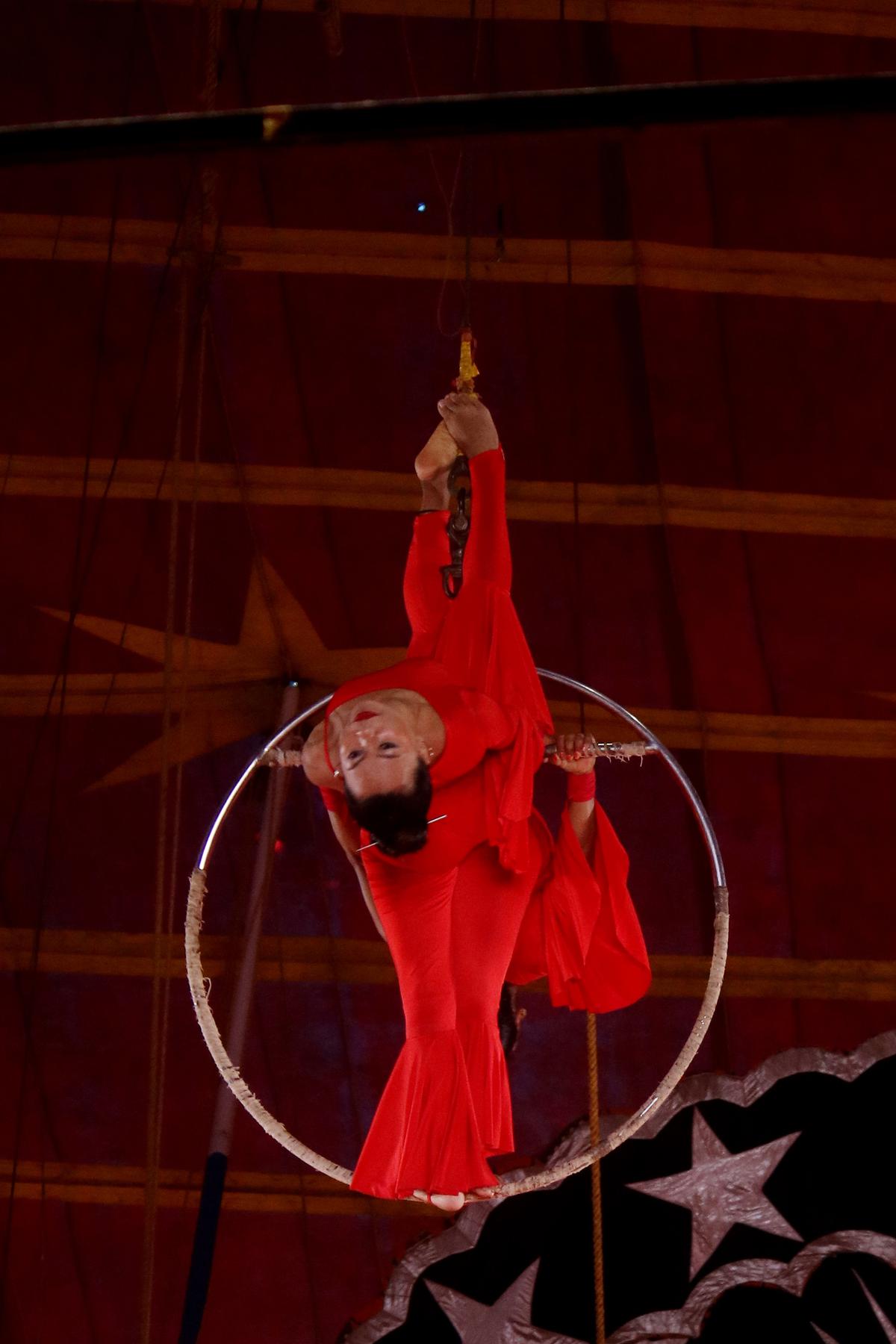 Hailing from Nepal, Dorendra Singh has been in the circus for nearly two decades now. “I had come to Mumbai as a young boy to meet some friends. It was there that I got attracted to the circus. I took training and eventually started working in the circus,” he says, adding that he found his partner, Priya Dulal, in the circus tent. They have a 13-year-old son. It takes hours of practice and patience to nail the act, says Priya Nair, a veteran on the tightrope. In her act, she kicks saucers and tea cups onto her head while balancing herself on a thin rope. Although her roots are in Kudamaloor in Kottayam district, Priya says she has hardly lived in the State and has been with GBC for 12 years. Most of the young artistes are trained in balancing acts on ropes and cycles by Bengaluru-based Bhanumathi Ramachandran. Artistes from Ethiopia have several acts as part of the show of Great Bombay Circus in Thiruvananthapuram
| Photo Credit: Sreejith R. Kumar

The star attraction of GBC is a six-member men’s team from Ethiopia — Abel, Yared, Dawit, Bir Hanu, Aschalew and Ayenew. It is a treat to watch them groove to Afro-beats, while performing jaw-dropping acrobatics, and juggling with a diabolo (a type of yo-yo). “The audience is extremely appreciative of what we do. We like it here, except for the food. It is spicy, so we cook our own food,” says Abel. All of them are students of a circus school in Addis Ababa.

In 1920, Baburao Kadam founded the Grand Bombay Circus in Sind province, now in Pakistan. Meanwhile, in Kerala, circus was finding its roots at Thalassery, thanks to Keeleri Kunhikannan, a martial artiste and gymnast.

His nephew, KM Kunhikannan, merged his two circus troupes, Whiteway and Hind, with Grand Bombay Circus in 1947 and thus was born the Great Bombay Circus. Kunhikannan’s legacy was carried forward by his nephew KM Balagopal. When he died in 1993, his sons KM Sanjeev and Dileep Nath took over.

Great Bombay Circus has been featured in Hindi movies such as  Don, Insaniyat, Phir Hera Pheri, and  Krrish, and the Tamil movie,  7aum Arivu.

The oldest member of GBC is Tulsidas Chowdhary. Over three feet tall, Tulsi has been playing a clown since 1959. Hailing from Chapra in Bihar, he says: “I might be over 75, probably 80 now! I was in class six when this circus was playing near my school. I used to walk in to see what’s going on. I didn’t have any interest in studies. So I decided to make people laugh.” A cancer survivor, he admits that he cannot do much at this age, other than being there in the circus ring with the other clowns — Sanjay Chowdhary, Pappu Thakur and Ezhimalai.

The pandemic and ensuing lockdowns turned their world upside down, says Dorendra Singh. “I had to do other jobs for a livelihood and it was difficult. When the show restarted, it was the most happiest moment for me,” he says. An artiste from Manipur performing during a show of Great Bombay Circus in Thiruvananthapuram
| Photo Credit: Sreejith R. Kumar

The circus was stuck at Mannargudi in Tamil Nadu when the first national lockdown was announced in March 2020. “We had to wait for nearly two months before transportation was arranged for the artistes. We took them in a special bus to Hyderabad, from where they were sent to their homes. We arranged flights for the Ethiopians to fly back home. We even took the help of a crowd-funding platform to raise funds for the artists,” says Sanjeev. He feels that the future does not look bright for circus troupes; the average expense per day comes to around ₹1.5 lakh. The ban on the use of wild animals has taken the sheen out of circuses. “There are acts featuring Australian parrots and dogs. We have a good response for the shows in cities, despite not having wild animals. But people in rural areas are keen on seeing the animals in action. Another problem is that we are not allowed to train those below 18 years of age, which makes it difficult to identify young talented artistes,” he adds. But the bigger challenge continues to be the lack of open spaces to conduct the shows.

“Last time we had enough space in Putharikandam Maidan to arrange accommodation for all the artistes. But this time, the women artistes — a dozen of them — stay on the premises of the ground itself, the men are put up in various hotels and lodges in and around East Fort area,” says Jayaprakash. Following the show in Thiruvananthapuram, GBC will head to Mysore for the Dussehra celebrations. Sanjeev admits that there is every possibility that GBC might wind up its operations in a few years. But, for the time being, the show must go on.

The Great Bombay Circus is on in Thiruvananthapuram till September 21. Timings for the show are 1pm, 4pm and 7pm. Tickets are priced at ₹100-₹400.