Homeentertainment‘Cobra’ movie review: A brilliant Vikram fails to save this middling outing
entertainment

‘Cobra’ movie review: A brilliant Vikram fails to save this middling outing 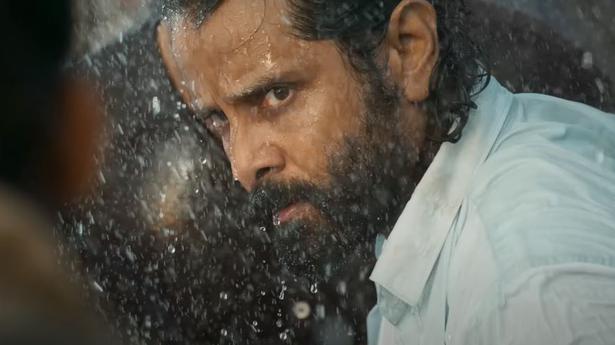 Ajay Gnanamuthu’s world that ‘Cobra’ is set in, is a great fit for Vikram, the malleable actor. However, the director fails in his attempt to make both a stylish actioner and an emotional drama at once

Ajay Gnanamuthu’s world that ‘Cobra’ is set in, is a great fit for Vikram, the malleable actor. However, the director fails in his attempt to make both a stylish actioner and an emotional drama at once

If the promotional material of the film were something to go by, Cobra was rightly expected to be in a space that Vikram revels in. The actor is known for his fascination for prosthetic-heavy looks, multiple identities manifesting out of a broken mind, dual roles….you get the idea. While quite a few attempts that banked on this ‘Vikram’ formula failed, Ajay Gnanamuthu somehow seems to have understood the task at hand, at least initially. He sets up a story with a protagonist that fits the bill for the malleable actor.

Vikram plays Madhiazhagan, a mathematics teacher who moonlights as a highly-skilled assassin. His acumen and aptitude in applying mathematics to the real world, with the chameleon-like ability to hide under a new skin, help him in executing the most outlandish of assassinations. One of the characters even likens his actions to that of a cobra that can shed skin when required and strike a deadly blow if needed. Yes, we get the cliche hero appeasement dialogues that elevate Madhi as a Lex Luthor-meets-Deadshot kind of figure and the way he executes these assassinations is a bit of an overreach (He hardly even uses mathematics!). Yet, the first act is a rather smooth sail. Ajay adds intriguing characters to the mix, such as an Interpol officer named Aslan (Irfan Pathan) who heads the manhunt searching for Madhi; a manic villain named Rajiv Rishi (Roshan Mathew) who does devil-knows-what other than ordering these assassinations; Nellaiappan (KS Ravikumar), Madhi’s Alfred Pennyworth-like figure; and a surprise character that eventually takes things up a notch. There is promise in how Ajay builds his world and we keep getting something to invest in or look forward to.

Storyline: After a series of high-ranking assassinations, an Interpol officer begins a manhunt to find the highly-skilled killer

But Cobra’s template structure is such that it can dissected into two distinct halves with the second half taking the story into a whole new territory. We get to see more of what goes into the mind of our protagonist and the relationship he shares with reality. His mental battles humanise him and Vikram gallops the opportunity to flex his acting skills. However, we don’t see more of what made this film enjoyable in the first half. The film begins to try too many things, and with multiple open canons at play, there is a struggle to find an anchor to its narration. The surprises around the corner become too predictable, and some sequences even turn out to be a tad too tedious to get through.

In retrospect, it seems like the film fell prey to the compulsions of the genre, with every box that can make an action film typical being ticked. Roshan Mathew, for instance, is the stock antagonist character who sprays bullets for lunch and debauches excessively in alcohol and women for dinner. The film doesn’t dig deeper and we never get a sense of why he does what he does. Even Irfan’s Aslan, who is used well as a narrative tool, ends up having more moments than Roshan’s Rishi. Similar is the case with Srinidhi Shetty’s Bhavana Menon, a criminology professor, whose romance subplot with Madhi ends up just as a filler. Thankfully, the same cannot be said for the other two female leads, Meenakshi Govindarajan and Mrinalini Ravi. While Meenakshi plays Julie, an undergrad criminology student who helps the Interpol, Mrinalini plays a character who has ties with Madhi’s past. Both the characters play a major role in driving the plot forward.

At the end of the day, however, as one can expect, Cobra is an out and out Vikram show. The actor gets enough space to flex his acting prowess and he does this tremendous ease, making you want to see more of him despite the three-hour runtime. As expected, Rahman’s music becomes a major strength to this film. Specifically, whenever Madhi gets an assignment, the brilliant title theme plays in the background like a signal.

But with all its potential, Cobra ends up as just another middling film that fails to be both an engaging actioner and an emotional drama. What is more disappointing than watching a film that does not deliver on the promise is bearing witness to one that squanders its own potential. The ideas are there and there is visible effort to make it a unique, engaging watch, and you just stand witness to how it goes all wrong. In a specific sequence set at a police station, Vikram pulls off something brilliant, garnering a lot of cheer from the audience. Looking back at it, you only feel bad that yet another film becomes an average outing for an actor who gives his all.