The makers of Mahabali 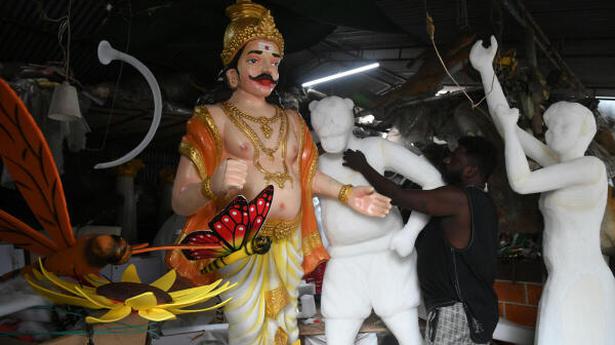 As Onam approaches artisans update tradition this year, from using more eco-friendly material to sculpting Mahabali with a six pack

As Onam approaches artisans update tradition this year, from using more eco-friendly material to sculpting Mahabali with a six pack

A six-foot high figure of King Mahabali stands tall in a large shed in Kaloor. The mythological King of Kerala is waiting to be dispatched to a shopping mall where his presence will usher in the spirit of Onam. Another good-to-go Mahabali, is being carried by two bearers to a truck. An artisan is engrossed chiseling a polyfoam figure of a pulikali dancer, while chenda players and Thiruvathira figures await final sculpting. Long, bright orange dragonflies dangle from worn out pipes, and a row of yellow, foam, sunflowers too are ready for dispatch.

Walking through the shed of Ameya Events means skirting around reams of polyfoam, tins of adhesive, stacks of metal frames and corrugated sheets, bags of smiley rubber balls and pails of enamel paints and emulsions. A smell of resin adhesive pervades the air and a Malayalam song from an artist’s phone binds the six men who are racing against time to complete Onam décor orders from large stores and malls in the city.

“The artists have been working day and night,” says Vipin KM who started the firm 15 years ago. “We have made six Mahabalis so far and many pulikali and Thiruvathira dancers.” Other Onam related characters and motifs in their inventory are figures of Vamana, snake boats, the traditional Kerala meal or sadya, upperi (banana chips), banana, pookalam(flower carpet), Theyyam and Kathakali masks. Most of the supermarkets, stores and malls want the Onam decor to be up before Atham(August 30).

Biju PD, “our main artist”, (as Vipin says) is self-taught. He has been making the figures for the past 12 years and has noticed changenot only in materials used but also in design.

“The Mahabali is no longer potbellied. We now make him muscular,” he says. Vipin adds that the “cartoon look” of Mahabali that was common a decade ago, is no longer accepted. “The new generation wants a figure with six packs. Ours is six feet tall and well built.”

Changes in materials include Thermocol giving way to polyfoam, which is sturdier and does not break easily. “It is also environment-friendly,” says Vipin. Earlier Plaster of Paris was commonly used but is replaced by fibre. “We also use coir, bamboo, corrugated board, jute and rubber foam. Resin used on canvas or with fibre becomes a hard and durable material,” he says.

Increased awareness of the environment sees figures are stored away and reused. All waste from the craft is taken away by recyclers from Chennai.

Art directors Sudhir Tripunithara and Ambili Joseph create the settings with designer Prateesh Kumar. Depending on the client’s requirement, they take photographs of the location to create the design. Once the scene is approved, work begins. “Lulu Mall wanted 50 Kathakali faces hanging in the foyer while Chennai Silks wanted a Mahabali seated on a throne with pulikali and Thiruvathira dancers on either side and a chenda melam players in the centre, at their entrance,” says Vipin. Onam, Diwali, Christmas, Pongal and Vishu are busy times for artists who are otherwise engaged in making characters and figures for weddings and conferences. Earlier in the year they made a four-foot high Prudential Cup for a function felicitating the cricketers who won the 1983 World Cup when they visited the city. The trophy stands with pride in Vipin’s office.

He categorically says they do not make cinema décor and stick mainly to festivals and events.

What is distinctive about outdoor public art, says Vipin is that it has to be large scale and exaggerated.  He is particular, however, that it does not look vulgar. Do these handmade figures find a place in their homes? “No, says Sudheer, “except for a flower or a butterfly.”

The artists went without work during the two years of COVID-19. Last year, when Onam celebrations were yet to resume as before, the artists created the figure of a masked and gloved Vamana, avatar of Lord Vishnu, pushing away the terrifying coronavirus that had troubled the people of his kingdom. “The installation became a big hit as it told the story of Onam in the current context,” says Vipin with a laugh. “These figures are all about a celebration and so humour is a big part of the art,” he says seeing off a Mahabali that is making his way to the Cochin International Airport where he will spread the joy of abundance of Onam.