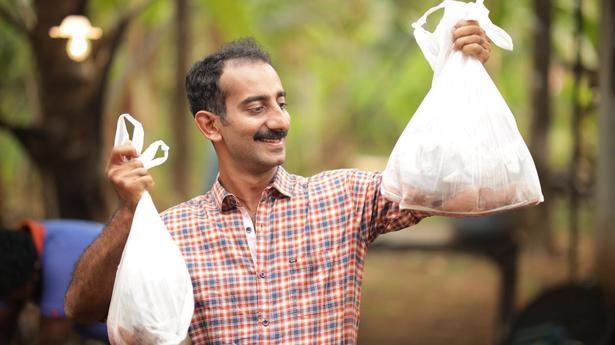 Director Jeo Baby lets the organic humour drive the plot, rather than drill home a message in his next project after the celebrated ‘The Great Indian Kitchen’

Director Jeo Baby lets the organic humour drive the plot, rather than drill home a message in his next project after the celebrated ‘The Great Indian Kitchen’

In Sree Dhanya Catering Service, much of the screen space is taken up by men. Yet, this is not just a movie about men and their bonding, or their ego-fuelled altercations, although that is what you get to see on screen mostly. The subtext conveys something else. What lies beneath is the suppressed disappointment of the woman who has to ask for permission from her husband to take a trip with her mates from the neighbourhood kudumbashree group (which he denies), with the script contrasting it to the ease with which a younger woman from the current generation embarks on a solo trip on her motorcycle.

Quite a few parallels can be drawn from the movie to director Jeo Baby’s most celebrated work yet, The Great Indian Kitchen. Right on top is the fact that much of the movie revolves around the act of cooking. Shino (Prasanth Murali), the owner of a struggling catering unit, decides to cook biriyani for the entire neighbourhood on his child’s first birthday. His wife (Beena) is not very keen on the idea, especially considering their financial situation, but his friends are enthused by the plan, thinking of the possibilities of a men’s-only booze party on the night of the biriyani preparation. His friend Sibi (Jeo Baby), who was adamant against his wife going on a trip, promptly sends her and their teenage daughter to their ancestral home, so that he could host all the men.

Storyline: A group of men in a small village in Kottayam get together to cook biriyani for a birthday party, which leads to a night of drunken revelry

Jeo Baby gets right the rhythm of the night of drunken revelry, slowly easing us into their midst, as the tension builds up and things start to go wrong. Some of the best bits are written around a Kozhikode man boasting about the famed biriyani of his native place, and his attempts to impose his methods on Shino, who is preparing it in his own ‘Kottayam’ style. The whole exchange is reminiscent of many of the pointless, region-based food debates in online spaces, that often snowball into major fights. “Is it written in the Indian Constitution that one should make biriyani in a specific way only?” asks a frustrated Shino.

Some of the other parallel tracks, especially the one involving the local progressive “intellectual” Mahonnathan does not really gel with the central theme. Although the movie and the title sequences focus fully on him and his group, the film does not return to them until the end, except for some short bits in the middle. It seems even the scriptwriter forgot about the character until that point!

But, most of the time, Jeo Baby lets the organic humour drive the plot, rather than drill home a message. The heady revelry at the same time leaves an after-taste of uncomfortable questions to men like Sibi.