HomeLifestyleI Have A Dream: A photo exhibition that focuses on light, drama created by its shadows
Lifestyle

I Have A Dream: A photo exhibition that focuses on light, drama created by its shadows Printed on stainless steel and paper, George K’s photographs of Southern temples, Madras Central Jail and Kashmir paint a dreamy landscape of past, present and existentialism

Printed on stainless steel and paper, George K’s photographs of Southern temples, Madras Central Jail and Kashmir paint a dreamy landscape of past, present and existentialism

George K is the artistic pseudonym of financier-turned-multimedia artist Dilip Kuruvilla. Having worked in painting and sculpture, with several successful exhibitions to his credit, he has now turned to photography.

As you enter the leafy environs of the Apparao Galleries, a small doorway opens to the show divided into three series, the first two rooms are a collection of images where the photographer has been inspired by a visit to a Southern temple town where there’s a tradition of offering statues of oneself with dreams and promises to the lord of the temple.

I Have A Dream is the collection’s inspirational title, used by Martin Luther King and inspired by Gandhi; over time this line has been an inspiration for equality in many ways.

The images are in grey, black and white on stainless steel as well as on photographic paper. Row after row of densely packed statutes, some fallen, others in disarray and leaning over each other in the undergrowth, the texture of the pictures plays with the light on the stainless steel surfaces.

Many of the photographs have texts from the poem written by George. The 72-year-old artist has touched up little details like bindis, and tilaks on the forheads and painted the eyes. Suddenly the statues come alive, looking at each other. An older lady is looking at a younger couple, and a gentleman is looking at another friend; each one thinking their thoughts and dreaming their dreams.

George says, “For me photography is a darshan, it is following the eye into memory; of a seen image, which establishes my place in the world. The way I see is affected by what I know or what I believe as we only see what we look at. To look is an act of choice. However, we never look at only one thing. Our vision is continuously active, moving, evaluating images around us. The eye of the other combines with my own eye to reinforce that I am a part of that visible world. My image in memory is through the process of darshan.” Song Sung Blue is a series of photographs inspired by George’s visit to Kashmir in 2006, a time of unrest in the Valley. Dabbed with acrylic colours —cobalt blue, neon orange and deep red — the series brings a sense of hope and colour to a dark situation.

Images of empty homes, concertina wires, collapsed windows and roofs remind us of grief and loss. The exceptional wooden architecture of Kashmir, burnt structures, and uninhabited spaces are a reminderof the horrors of history.

Elaborating on this project, George says, “The poignancy of the Kashmiri architecture ravaged by destruction, solid, spectacular, silent sentinels, is testimony to the recent history of the region.” Freedom Calls is the last series of photographs featuring Madras Central Jail, one of our oldest prisons started in the year 1837 during British rule and renamed Central Jail in 1855 from being called the Madras Penitentiary.

The Madras Central Jail housed many freedom fighters during the early years of the Independence movement, including Subhash Chandra Bose and Vir Savarkar. Its other inmates include Dravidian icons CN Annadurai, Mu Karunanidhi and J Jayalalitha.

Often, the jail worked as a transition place for people being transported to the Cellular Jail or ‘Kalapani’ in the Andaman and Nicobar Islands. 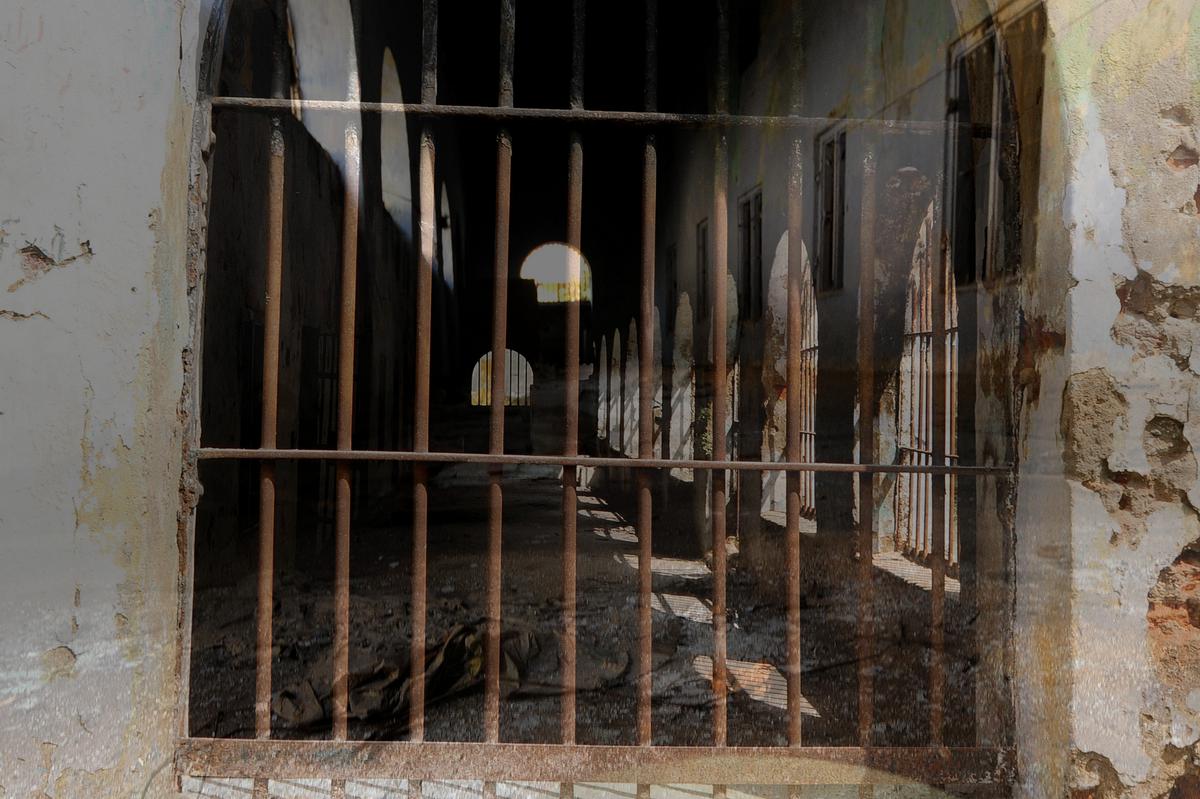 The jail was home to the infamous Auto Shankar as well as the leader of the Liberation Tigers of Tamil Eelam (LTTE), V Prabhakaran. Large photographs on stainless steel, these images are overlaid with images. Light creates a certain two-dimensionality, whether it is streaming through the windows or jail bars, feeding ushope.

This building has now been demolished, but the visuals in the show remind us what it means to be trapped. Are we jailed by our thoughts or are we able to live a free life?

Commenting on the series, George says, “The focus is on light and the drama created by its shadows. The underlying expression and relationships are hope, the spirit of freedom and the human desire to be free. The work is on stainless steel and is lines in a grid. It is about freedom from the existential pattern of life.” Three completely disconnected visual themes allow us to be inspired,confront, and be hopeful in the way we engage with the world. Herein lies the skill of the photographer and the curation. As a final comment, George leaves me with this thought on beauty, “I try to depict beauty through altered photographs, paintings and sculptures in form and non-form, sensual to spiritual. I try to pierce the facade and unmask the beauty beneath the image. It is a journey in the discovery of the self.”

On till September 3 at the Apparao Galleries, Nungambakkam.