Fatima’s fight gives a lifeline to many women 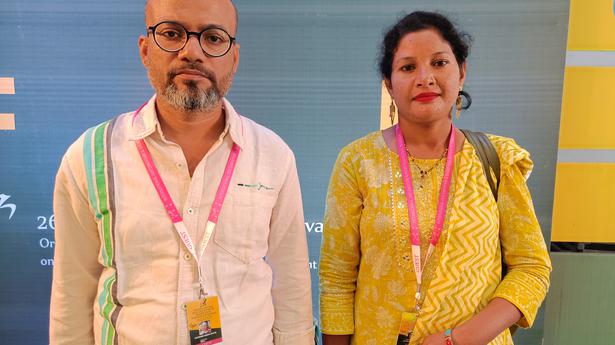 The docu, Fatima, depicts a solo fight against inter-generational prostitution prevalent in her community

The docu, Fatima, depicts a solo fight against inter-generational prostitution prevalent in her community

Fatima clearly remembers the day her childhood ended. At the age of nine, her parents sold her off to a person under the garb of marriage. It was the beginning of years of exploitation and hopelessness. But one day, she decided to put an end to her sufferings. She escaped from the red light area of Forbesganj in Bihar in 2007, and has since then been involved in saving women and young girls facing a similar plight.

Sourabh Kanti Dutta’s Fatima, being screened in the long documentary competition category at the 14th International Documentary and Short Film Festival of Kerala (IDSFFK), chronicles Fatima’s journey and her attempts to build a new life. Her plight is connected to her community, Nat, one of the denotified tribes that was branded as “born criminals” by the British administration in 1871. The decision is estimated to have led to the practice of inter-generational prostitution in communities, including Nat, with the families or even the husbands forcing young women into prostitution. It is a vicious cycle that Fatima and others are trying hard to break.

“Once I got out, it was very difficult to go inside and interact with the girls. They beat me, threw stones at me, and hurled abuses. Most policemen are hand-in-glove with the men running the sex trade. The ‘Apne Aap’ NGO and a few honest police officers gave all the support. Even when the police sometimes conduct raids under pressure from activists, they let the offenders slip away,” Fatima tells The Hindu.

Filmmaker Dutta, who had earlier made the documentary I Am Bonnie on an intersex sportsperson, zeroed in on Fatima when he was studying inter-generational prostitution in another community in Delhi. An activist directed him to Fatima, who was not afraid to talk about her experiences.

“It was very challenging in the beginning. When I shoot, people would either go away or they would raise objection. My only access to all these places was Fatima. Wherever she went, I could capture that zone. Over the years, she has rescued several women,” says Dutta.

The documentary was shot a decade after her escape. Still, one could see the kind of threats, intimidation and attacks that she had to resist. Some of the sequences show families resisting her attempts to get the younger girls to school and save them from prostitution.

“Now the number of girls in the trade in that area has come down. The NGO gives the rescued girls training in self-employment. The Bihar government also has a scheme to put rescued girls in schools. But the larger society is still reluctant to accept them or employ them,” says Dutta.

The Hindu Business Line37 mins ago
2