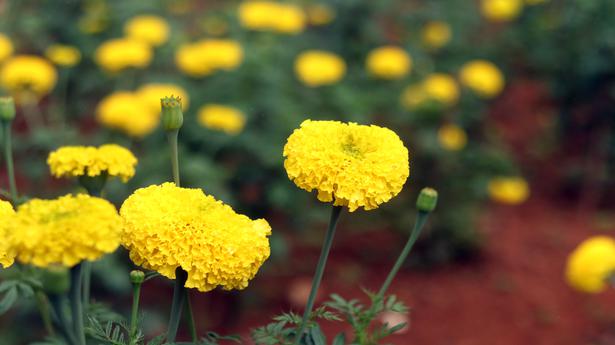 Dew-drenched marigolds, chrysanthemums, jasmine and oleanders in full bloom sway in the breeze at Plamoottukkada near Parassala, some 30 kilometres from Thiruvananthapuram. Here, on an 80-cent plot, Parassala block panchayat is promoting Poovili 2022, a project to encourage floriculture.

Also in Thiruvananthapuram, marigolds are also grown on nearly 8.51 acres at six grama panchayats spread across the block panchayats of Nemom and Vellanad.

The local self-government bodies in Thiruvananthapuram have gone all out to promote floriculture to cash in on the Onam market for flowers to make floral carpets, an integral part of the celebrations. The plan is to reduce the dependence on flower markets in Kanyakumari district and Bengaluru during Onam. Several block and grama panchayats are growing flowers on their own plots, albeit on a small scale.

“It was an ambitious project. But the result exceeded our expectations and we had a bumper harvest, especially of marigold, in May this year. Now the second batch of marigold is getting ready for harvest,” says S K Ben Darvin, president of Parassala block panchayat. “We had people coming in from other parts of the district to see the flowers,” adds Alvedisa A, vice-president of the panchayat.

Parassala block panchayat started the project in March this year, under the five-year plan. Marigold in three shades of deep yellow and orange, oleander in red, pink and baby pink, and different varieties of jasmine such as kuttimulla and pichi were planted.

“We have adopted mulching method (to prevent weeds and protect the roots and soil) with drip irrigation. Initially, 20-day-old saplings of marigold were planted and within two months we got the harvest. We get 40-50 flowers from a plant,” says S Vijayakumar, former agricultural officer and facilitator of Agro Service Centre, who provided assistance and guidance for the project. 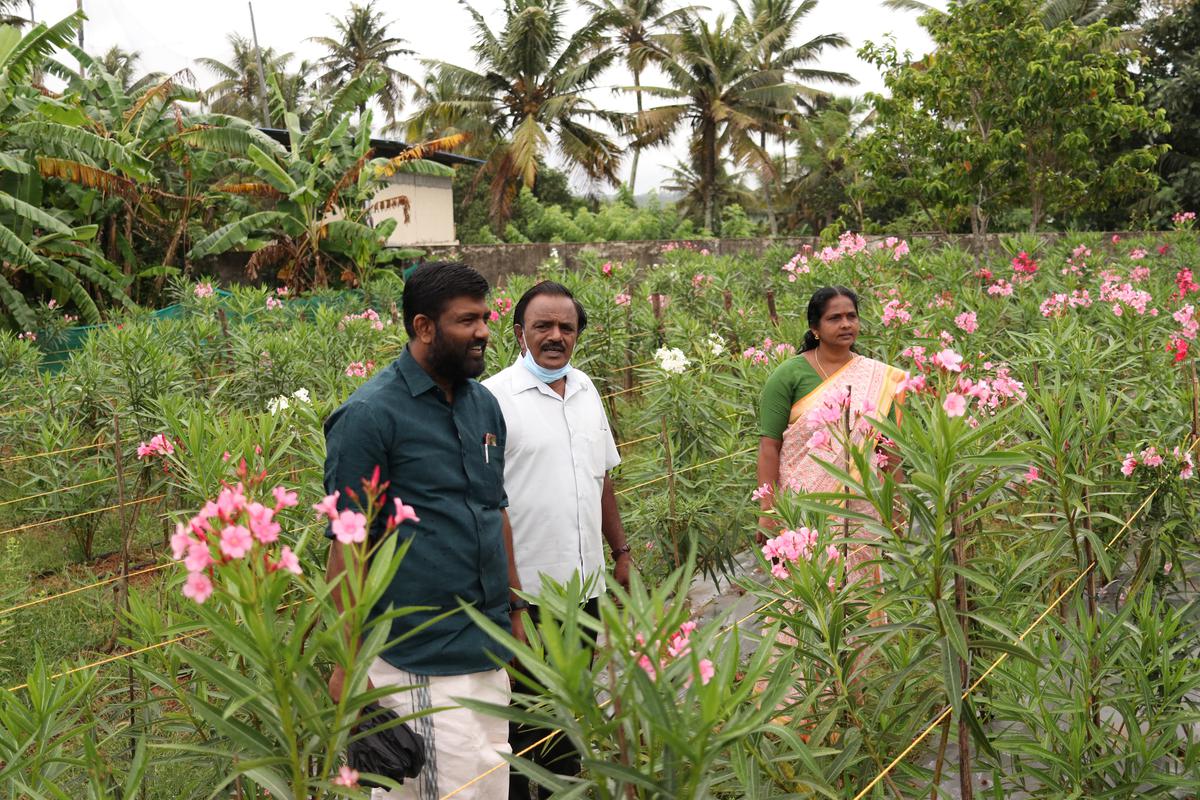 The first batch of jasmine and oleander continue to give yield. “It is necessary to prune these plants regularly to ensure a better yield,” Vijayakumar says. The panchayat has also cultivated marigold on 30 cents on the premises of Lutheran UP School, Ponvila, which is ready for harvest.

It is implemented under the Pradhan Mantri Krishi Sinchayee Yojana (PMKSY)-Watershed Component in convergence with Mahatma Gandhi National Rural Employment Guarantee Scheme (MGNREGS). “It was a novel venture but we have been able to implement it well,” says Ajikumar K, block development officer, Nemom.

The 33 beneficiaries in the scheme include individual farmers and farming groups. “Our marigold farm is on 20 cents. It was a challenge when we started but now we are looking forward to the harvest. Since we have to water the plants twice every day, we do that in separate batches,” says Sheeja Kumari V, member of a 20-member group from Maranalloor.

Inauguration of marigold harvesting at Pallichal. The farm is managed by Farm in Trivandrum group
| Photo Credit: SPECIAL ARRANGEMENT

Farm in Trivandrum (FiT), a joint farming venture, grows marigold on 50 cents at Kannamkode ward of Pallichal. “We have been cultivating multiple crops, especially fruit-bearing trees, tubers and the like. Marigold was introduced as an inter-crop. Women employed under MGNREGS prepared the land and we didn’t have to spend on saplings as it was provided by the Krishi Bhavan. The harvesting will start prior to Atham (August 30),” says Vinod Venugopal, who conceptualised FiT.

The panchayats plan to continue floriculture even after Onam. “This will be an additional source of income and our dream is to make this a flower village,” adds Ben.