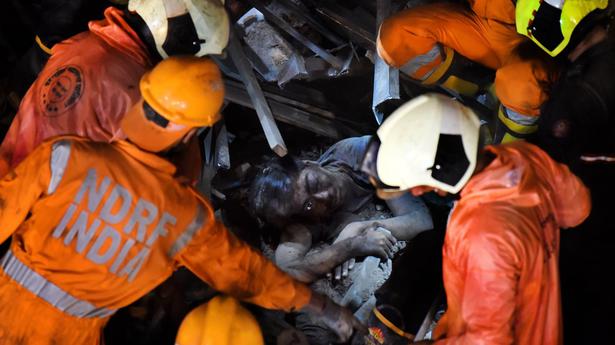 There’s a sense of hope in the photograph that shows the National Disaster Response Force personnel rescuing people, including an infant, in the flood-ravaged Nalbari district of Assam. The human spirit of not giving up comes to the fore again in an image that shows rescue workers pulling a survivor from the rubble of a building that collapsed following incessant rains in Mumbai. Elsewhere, a 16-year-old Ukranian refugee in Moldova makes do with the bare minimum while an image of sunflowers on her phone reminds her of a sunny past. These are among the 40 nominations for the Indian Photo Festival’s (IPF) Photographer of the Year (POY) award.

On view at the State Gallery of Art, Hyderabad, are five final nominations in eight categories — photojournalism, documentary, travel and nature, wildlife, street, portrait, wedding and mobile photography. The exhibition featuring nominations of IPF-POY is on view till September 19 and the award winners will be announced on September 17. According to Aquin Mathews, director, IPF, winners will be announced in each category and there will be an overall winner as well.

The IPF began seven years ago as an annual event in Hyderabad, with talks by artists, workshops, masterclasses, portfolio reviews and exhibitions. The 2022 edition will begin mid-November as an on-ground event and prior to that, the IPF was keen to launch the POY award. “World over, there are several photographer of the year awards; we haven’t had something similar in India and that prompted us to launch this initiative,” says Aquin.

The POY award was announced in January 2022 and entries came in from more than 85 countries. Aquin says that the nominees in each category were selected through a blind selection process in which the photographers’ names were not revealed to the jury, to ensure that the selection was unbiased.

(The IPF-POY nominations are on view at State Gallery of Art, Madhapur, Hyderabad, till September 19)