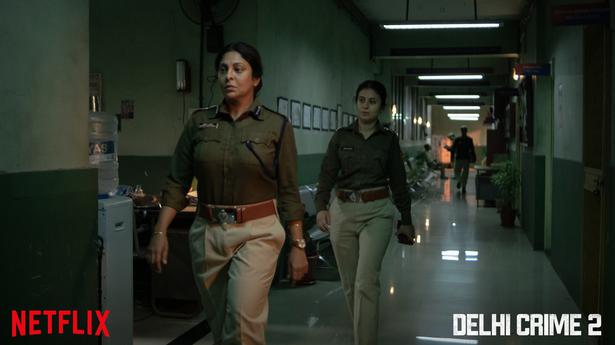 After an impactful first season, Delhi Crime returns with a new case that is obviously not as intense as Nirbhaya’s gang rape and murder, but has enough substance to keep us engrossed and invested. More than half a dozen writers have put together five fast-paced episodes that solve the sudden spurt in brutal murders of elderly couples in Delhi’s posh South district. As Deputy Commissioner of Police Vartika Chaturvedi (Shefali Shah) and her trusted lieutenants return to the gory crime scenes, the modus operandi suggests the return of the dreaded  Kachcha Baniyan gang that was active in the 1990s, but soon the evidence reveals that there is more to it than meets the eye.

Based on  Moon Gazer, a chapter from ex-top cop Neeraj Kumar’s book  Khaki Files, the moral dilemmas that have been woven into the narrative gives the series its sharp claws that scratches the conscience. Can an entire tribe be castigated for the transgressions of a few? Creator Richie Mehta even uses his surname to put the point across. Is the increasing social divide responsible for the surge in the crime rate? Do people living on the margins of society have a right to snatch the ill-gotten money of the corrupt among the elite to fulfil their aspirations? Can the police, always under political pressure, rewrite the narrative set by the news hounds who have a daily deadline to meet? There are no easy answers. Director Tanuj Chopra is not aiming for a lecture on crime and its causes, but the form consistently gives a feeling that the crime procedural has the heartbeat of a nuanced documentary.

David Bolen’s cinematography and Ceiri Torjussen’s music bring the dread into living rooms, and the brooding atmospherics add to the top-rate performances.

Storyline: The Delhi Police investigate a multiple murder case involving senior citizens. While all the evidence points squarely towards the return of the gruesome Kacha-Baniyan gang escalating public fear, the cops delve deeper to uncover the truth

Shefali Shah once again holds the series together with an understated yet imposing performance that captures the tenacity of a police officer with finite resources at her disposal. Vartika doesn’t lose her grace even when she is under fire and Shefali has got the eyes to internalise her pride in her values. Rajesh Tailang and Rasika Duggal carry on with the good work from the first season. But the scene -tealers this time are Saurabh Bharadwaj and Anurag Arora as SHO Subhash Gupta and Sub inspector Jairaj Singh. Bharadwaj is so efficient that you tend to forget you are not watching a real policeman at work. Even when he is on the edges of the frame, he remains in character. So does Anurag as the officer who doesn’t mind stretching the rules a bit to survive the gruelling job profile. How Neeti’s (Rasika) domestic blues affect her professional life is absolutely relatable even though it becomes a tad predictable after a point. An abusive old grandmother who is an accomplice in crime, the hairdresser who wants a pound of flesh of her customer, a celebrity lawyer who stands for the rights of denotified tribes… the series has a number of characters that make you chuckle and disturb you at the same time.

A still from the series
| Photo Credit: YeashuYuvraj/Netflix

This time, the series, which largely shows the Delhi Police in a soft light, also looks within the system. A retired Station Officer Chaddha is roped in to crack the case, but he turns out to be liability because of his corrupt practices that went unnoticed in the past. Have the likes of Chaddha ceased to exist in the force? The series chooses to remain in the present, where leaking the CCTV footage of the crime to the media results in suspension.

Unlike the first season, the excessive use of English by Vartika while conversing with her team irks after a point. In a crucial scene, she asks Bhupinder (Tailang), her trusted subordinate, “Are we falling short?” Is the writer addressing an international audience in English or is Vartika talking to a colleague who has come up through the ranks? The atmosphere feels a little too sanitised and organised at times for those who have seen life at a police organisation from inside. It is also hard to believe that Vartika’s juniors do not question her style of functioning, or that nobody tries to by-pass her by reaching out to her superiors!

The idea of going with a female antagonist demands a bit of suspension of disbelief because of the physical brutality that the cases demand, but there is no lack of commitment from Tillotama Shome. The scene where she cranes her neck out of a car in Delhi’s toxic air, to gaze at the moon after a narrow escape, remains etched in the mind long after the series is over. But her strand demanded a few more drafts to iron the gaps and space out a quick series of coincidences. Perhaps, one more episode on dressing up her Karishma would have helped. Dibakar Banerjee’s  Titli expressed the rough edges of the violent minds in the neighbourhood in a much more tangible way.

But eventually, when Shefali says that there are no clear answers in the eyes of the criminal, one gets sold on her persuasive charm all over again.