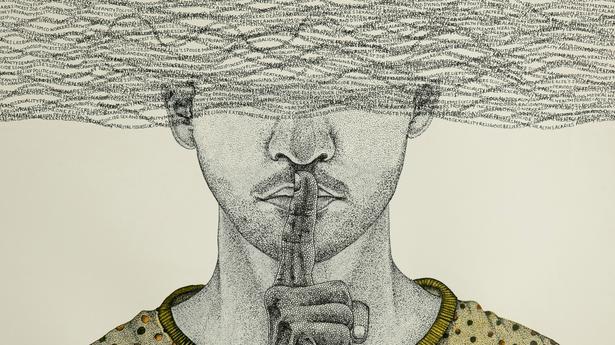 Dialogues with my Self: Ashu Gupta

A contemporary artist who specialises in pen-and-ink art, Ashu Gupta, says the striking feature of her work is its mainly monochromatic nature. However, Dialogues is one series where Ashu has used hints of colour. “It is not that I did not want to ever use it; I wanted it to come naturally and that happened organically in this series.”

In Dialogues, Ashu has attempted to capture snatches of conversation we all have with ourselves — the constant swirl of thoughts. “The tales of my strengths and insecurities, pain and purity, dreams and desires are mixed together in an endless dialogue within myself and in my art. There are 12 pieces in this series and they depict the thoughts that almost everyone encounters.”

A close look at each piece reveals that all the scribbling and stippling (a drawing technique) is actually text. Ashu says she has also used paper piercing in this series. “It happened accidentally when I was working on The Dreamer and was trying to express myself. There are a few dreams which are common to everyone, especially as children — that you’re sitting on a cloud, that you can fly. By using paper piercing, I feel viewers will be able to feel as well as see what I am trying to convey.” “ Affirmations is an attempt at self portraiture. Around the head I’ve penned the assurances I give myself regularly — it’s personal as well as universal. It’s what each of us feeds into ourselves to be more positive in life.”

In order to aid those who may not have so much knowledge about art, Ashu has created an interactive experience piece at the gallery where they can follow her creative process. “It would be easier for a person feel closer to a work of art, if they understand the artist’s journey.” One Day At A Time by artist Ashu Gupta
| Photo Credit: Special Arrangement

“I have painted outside my usual style with Divinations — I wanted to find a different part of myself,” says artist Shoeb Dastagir, talking about Divinations At Noon, his ongoing exhibition. Almost all the pieces in this series have an Alice-in-Wonderland like quality to them, lush with imagery of dragons, serpents, cake, surreal plants and the glow of summertime, depicted in vivid bursts of colour. ‘Divinations At Noon — Dreams and Musings,’ is a collection of around 25 of his work using oils and glitter on canvas though he usually enjoys using watercolours.

Shoeb says he took to painting when he was quite young as he liked to ‘share my art with the world’ and because it helped him heal. Facing his mental health challenges as a schizophrenic, Shoeb says, “It heals as I create something beautiful, purging the sadness out of my soul; it is a release for the chaos in my mind,” adding that he does not believe his mental health affects his creativity, but rather his interpretation. “All of us go through ups and downs in our moods everyday. I am constantly creating through every mood, working for days non stop — when I hit a bleak period or burn out, I express myself through words and creating music.”

The exhibition will also showcase around 10 of Shoeb’s poems, each capturing his emotions and sentiments on love, longing and separation. Talking about how most of his work have titles such as Greyscale Economy and Honey Eclipse, Shoeb says the process is something of an artistic loop — some works are created and then named, while others are created because a topic or thought inspired him to create. Gallery Time and Space in association with Alliance Francaise will present Divinations At Noon by Shoeb Dastagir from August 26 to September 9.