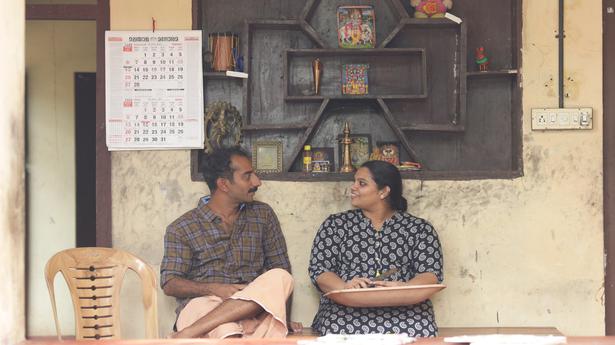 
Post The Great Indian Kitchen, any Jeo Baby-film rides high on expectations. Sree Dhanya Catering Service, his new film, which reaches theatres on August 26 is no different. But the filmmaker asserts that he is not burdened by expectations. “My focus is always on what I can do and what I shouldn’t do. I want each of my films to be different from one another,” says Jeo.

So Sree Dhanya… promises to be a full-on comedy, a new genre for him. “It is an attempt and I hope people like it,” says the director. The film is about men working in a catering unit named after the owner Shino’s wife, Dhanya. On their child’s first birthday, the employees decide to cook biriyani. But things do not go as planned and a chain of humorous incidents follow.

“When men get together, there is usually drinks, song, dance and even fights. But the film is not just about them. It also talks about their families. It is not about booze or patriarchy. The film has been given a U Certificate and we promise laughs,” says Jeo, who has written the story and screenplay. He adds: “I have taken some real-life instances for the narrative. My friend, also named Shino, runs a small catering firm and I have worked with him. Some of our experiences there have made it to the film,” he says.

In the cast are Prashanth Murali (as Shino), Kala-fame Sumesh Moor, Jeo himself, and Anna Fathima, who played the lead in Jeo’s first film, 2 Pennkuttikal (2016) and won the Kerala film award for the best child artiste.

What excites Jeo the most are the new faces in the cast. This include Jeo’s wife, Beena, who plays Dhanya. “We did a few short films during the lockdown. So when I was looking for a fresh face for Sree Dhanya… I felt she would be able to pull it off. The movie is set in my home town, Thalanad in Kottayam district. The people I know and several locations I am familiar with are part of this movie. I didn’t do any audition for the actors; I got in touch with people who I know have the passion to act. The strength of the movie is the performances of these newcomers. The way they respond to certain situations, their grace, took me by surprise. My son, Music Jeo, daughter, Katha Beena, and my mother, Aleykutty, have acted in the film. Music, who is in Class Two, was also my assistant!” the director says. There were no workshops for the debutants. “Biriyani preparation is a highlight of the movie. So we made biriyani on the set prior to the shoot and the actors were part of the whole exercise so that they would know how and when to say the dialogues,” he explains.

Sree Dhanya… is Jeo’s theatre release in the last four years — the last one was his second film, Kunju Daivam. The fetched Adish Praveen the national award for the best child artist. His other films — Kilometers and Kilometers, The Great Indian Kitchen and Old Age Home, which was part of the anthology Freedom Fight, were released on OTT platforms. Sree Dhanya… is produced by Jomon Jacob, Dijo Augustine, Sajin S Raj, Vishnu Rajan, who also produced The Great Indian Kitchen and Freedom Fight.

“This film was made for cinemas. It is encouraging to see crowds in theatres. There have been a lot of discussions about the decline in footfalls in theatres. But my contention is that a film that connects with the audience will definitely bring in crowds. The problem lies with cinema and not the audience. If Sree Dhanya... fails to elicit laughter, then the film is at fault and not the viewer,” he asserts.

He is enthused that Malayalam cinema is going places with content. “There is a progressive growth, thanks to some amazing filmmakers and artistes. It is encouraging to see more women filmmakers.”

Meanwhile he is all set to direct Mammootty in his next project. “The story is getting ready. I take up only that stories that persuades me to make a movie out of it. Gradually it grows within me and that is the moment I enjoy the most,” he signs off.

The Hindu Business Line41 mins ago
2