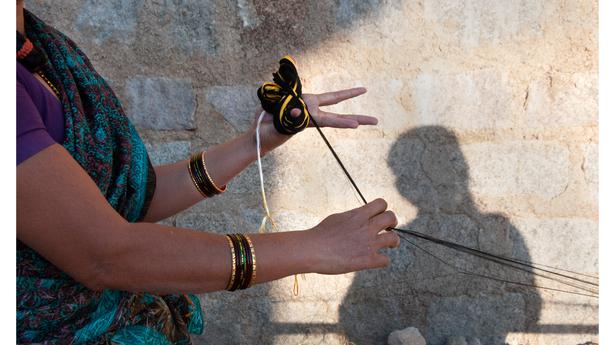 Kandukuri Ramesh Babu finds the extraordinary in the ordinary. With a Nikon D 90 as his tool, the Hyderabad-based journalist-turned photographer captures photographs that narrate stories of hope and resilience of handloom weavers. The photo exhibition Netha features 85 photographs displayed at Samanyashastram Art Gallery in OU Colony, Manikonda. The photos depict myriad moods — joy, contentment and a fighting spirit. “My aim is to show and celebrate the soul of a weaver and his never-say-die attitude,” says Ramesh.

Ramesh’s journey began in 2018 with a government project to document important weaving centres in the State. The project, Ramesh says, was to put the spotlight on handloom clusters to showcase the Telangana vaibhavam (glory) . Travelling for eight months, with around 10 days in each village, Ramesh visited the clusters of Pochampally, Koyyalagudem, Gattuppal, Siripuram, Vellanki, Puttapaka, Pothireddypally, Alampuram, Gadwal, Narayanapet, Siddipet and Sircilla. “I fell sick after the journey as the lives of handloom weavers whose lives and struggles depended on master weavers deeply affected me,” he recollects. Ramesh went back later that year to capture their lives through his lens. “The people in my pictures were struggling against odds to make their lives and handlooms better. What was heartening was to see their sustained efforts to not despair even while living in poverty. A bit of government support can do wonders in the lives of the handloom weavers,” he points out.

A loom lying in a storeroom in Gattuppal with a portrait of Mahatma Gandhi takes centre stage in a 28×42 cm photograph. “2022 is an important milestone for independent India . We need to check the state of the handloom weaver in this significant year,” says Ramesh looking at the frame. A photograph from Gadwal shows an elderly woman — the mother of a weaver – sitting majestically in her house-cum-workshop with a green door. “More than half of their house has been demolished to lay roads. The green door signifies hope and change, reflected in the sparkle in her eyes.” elaborates Ramesh.

Recollecting the experiences at Sircilla, Ramesh says, “There are 26,000 families in the power loom sector in Sircilla when compared to the 72 families in the field of handloom. They have mini-looms and weave towels and handkerchiefs and look optimistic.” While a woman rearing silkworm depicts the important role they play, some of the other frames include a portrait of Konda Laxman Bapuji found in weavers’ houses. “He is considered a god among weavers for establishing cooperative societies.” Then there are portraits of master weaver Gajam Govardhan, Gajam Anjaiah, a carpenter who repairs looms in Pochampally, and 92-year-old Konka Sailu, one of the designers of Siddipet Gollabhama sarees engrossed in putting a design in a book. Handloom weavers are like artists and represent all of us, says Ramesh. “We have to preserve these unique weaving styles. They need institutional support from the government and nurturing from the people. I want people to see their troubles and working styles in these photographs to connect with their soul.”

While Shantha Biotech founder K I Varaprasad Reddy has helped in printing the photographs, Ramesh hopes to give 50 per cent of the proceeds from the sales of each photograph to the weaver in that image.

The exhibition ends in November.