HomeLifestyleKuchi mittai to kuruvi rotti, tasty treats of the 80s and 90s kids in Chennai are back
Lifestyle

Kuchi mittai to kuruvi rotti, tasty treats of the 80s and 90s kids in Chennai are back 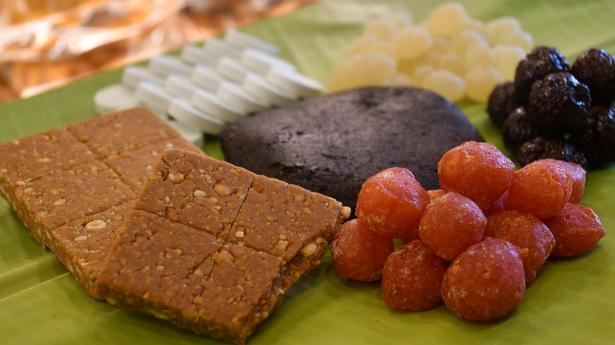 There seems to be a renewed interest in nostalgic, native special toffees and snacks, locally made and sold at in petti kadais near schools in the school vicinity between the 1970s and 90s during the 70s 80s and 90s

There a renewed interest in native toffees and snacks, locally made and sold at  petti kadais near schools between the 1970s and 90s

Two things can transport us back to the 1980s and 1990s: the songs of that generation and the treats we bought with our pocket money from the petti kadai (tuck shop) near the school gates. Neighbourhood Kirana shops or annachi kadais are slowly dwindling, which is one of the reasons why Chennai’s locally manufactured native toffees and snacks are no longer easily available. “People have become brand conscious and buy branded snacks and toffees, and as a result, the current generation has no idea about these toffees,” says G Bhasker of Chennai Angadi, which runs a popular Instagram handle that is trying to turn this tide.

Bhaskar launched Chennai Angadi as an organic store in 2018. Though he wound up the business within eight months, he relaunched it as a traditional sweet and snack store in 2020. “Due to the lockdowns, we focussed our attention on online sales in Chennai and soon we had over 500 customers. Last year, I launched the 80s­90s kid’s special range and to my surprise, it was a huge hit, especially among older clients,” says Bhaskar. “The joy and excitement I notice when the elderly see my collection is priceless. They all seem to have a story to tell and connect with grandchildren through toffee.” Bhaskar has been popularising these lesser ­known sweets by putting up stalls at events and apartment complexes across Chennai. “Once we put up a stall at a huge IT company on OMR, and it was interesting to observe the reaction of people who walked into. The instant emotional connection they made was endearing,” he says. Bhaskar, who offers a combo pack of candy for ₹99, says he is not just reaching younger buyers online, but is also now getting orders for birthday parties and wedding return gifts.

Your childhood, in candy

Elandha vada is made by grinding together fully ripe elantham pazham (jujube berry) with tamarind, red chilly, asafoetida, salt and jaggery. The paste is then flattened into small discs and sundried. It can be stored for a longer period.

Thaen mittai is made by soaking rice, sabudana (optional) and urad dal together for a few hours, then grinding it to a fine paste with little water. To this batter, orange food colour and baking soda is added. Bite-sized dollops of this batter are fried till crisp and then dropped into sugar syrup.

A 90s special, coco mittai is made by caramelising sugar and adding peanut granules or powder and mixing and shaping into discs or balls

Bhaskar travels across the city in search of manufacturers. “Such small cottage industries are on the verge of closing down and I request them to make a few kilos. That is how I got different types of mango-flavour, raw mango-flavour toffees,  and vegetarian marshmallows. My search continues,” he says. At Mylapore Ganapathys, an 80­year­old store, freshly made kamarkat flies off the shelf: Sundar Vadivel, an expert in traditional sweets, makes and restock these every week.

“Traditional sweets such as kamarkat, pulippu mittai, thaen mittai, strong peppermint, seeraga mittai and elandha vada kindles nostalgia and transports the older generations back to childhood. Realising this we introduced these items at our store 20 years ago,” says S Saravanan of Ganapathys. “Inji marappa, elandha vada and kamarkat sell the most. We also have a steady stream of customers walking in for seeraga mittai, orange mittai and coco mittai (powdered peanut candy),” says Saravanan.

At Srividhya Coffee in Besant Nagar, known for homemade food products, there is a shelf dedicated to old­fashioned toffee and snacks. “I launched this shop 40 years ago exclusively for coffee roasting and grinding and gradually began to stock traditional snacks made by home chefs. There has been a demand for kamarkat, pulippu mittai, puli mittai and strong mint, especially by senior citizens,” says Vidhya Sreenivasan, proprietor, adding, “These days we have kids walking in and asking for these items. Our manoharam (broken thaenkuzhal pieces dipped in jaggery syrup and shaped into small round shape balls) is immensely popular and our supplier has been the same for the last 35 years.”

Engineer ­turned­ entrepreneur, R Srinivas better known as Kamarkat Srinivas, launched Marabu Suvai in Thiruvanmiyur eight years ago. He offers kamarkat in variations of baby­soft (for kids under three), medium, hard and lollypop. Srinivas sources organic jaggery from Karnataka and other ingredients from within Tamil Nadu, and his customers are across the country and even overseas All these toffees are made with permitted colours and ingredients approved by the FSSAI , and I do not sell products with non-vegetarian ingredients. Also I don’t sell bubble gum, says Bhaskar, who offers a combo pack of 80s- 90s toffees at ₹99.