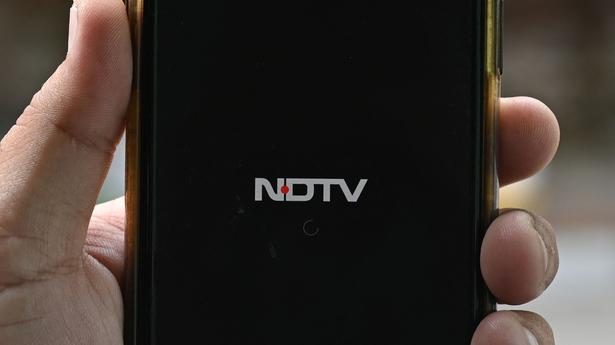 In the face of a takeover bid from the Adani group’s media subsidiary, NDTV promoters Prannoy Roy and Radhika Roy indicated on Thursday that an immediate transfer of their shares held through promoter holding firm RRPRH is not possible as they are currently barred by stock market watchdog SEBI from dealing in shares directly or indirectly.

SEBI had restrained the promoters from accessing the securities market for a two-year period that expires on November 26, 2022, unless pending appeal proceedings were to successfully conclude prior to that date, the company stated in its latest regulatory filing.

Adani Enterprises had, on Tuesday, announced a bid with its subsidiary AMG Media Networks Limited (AMNL) to take over NDTV after it indirectly acquired a 29.18% stake in the media outlet, with an open offer to acquire another 26% stake from its public shareholders at ₹294 per share.

The NDTV promoters’ statement, issued to the stock exchanges on Thursday, assumes significance as the Adani group had sought a transfer of the 29.18% shares held by NDTV’s promoters through a holding firm RRPRH, within two days.

AMNL group had exercised warrants that are convertible into RRPRH’s shares held by Vishvapradhan Commercial Private Limited (VCPL) as part of a loan agreement with the Roys signed in 2009-10. The two founder-promoters of NDTV hold 32.26% in the company in their personal capacity.

NDTV’s share price, which stood at ₹366.20 on the Bombay Stock Exchange before the Adani group’s takeover bid announcement, rose 5% for the second day in a row to close at ₹403.70 on Thursday.

The news broadcaster, which had told exchanges that the entire transaction was carried out without any consent, discussion or inputs from the NDTV management, said on Thursday that it has notified the “proposed acquirer” about a Securities and Exchange Board of India (SEBI) order of November 2020, “restraining” them from dealing in securities.

“In view of directions in force vide order dated November 27, 2020, of the SEBI, restraining the Founder-Promoters Dr. Prannoy Roy and Mrs. Radhika Roy from accessing the securities market, and further prohibiting buying, selling, or otherwise dealing in securities, directly or indirectly, or being associated with the securities market in any manner whatsoever for a period of two years…” NDTV said in its latest regulatory filing.

NDTV further said that details will be provided to VCPL in compliance with SEBI’s Substantial Acquisition of Shares and Takeovers Regulations of 2011.

Adani Enterprises Limited (AEL) had said that VCPL is a wholly owned subsidiary of AMNL and has exercised its right to convert 19,90,000 warrants into 19,90,000 equity shares of RRPR constituting 99.50% of RRPR’s equity share capital by issuing a warrant exercise notice on Tuesday. The open offer has been proposed by VCPL, AMNL and AEL as persons acting in concert.