Production designer Sahi Suresh on the making of ‘Karthikeya 2’: Locations, sets and miniatures 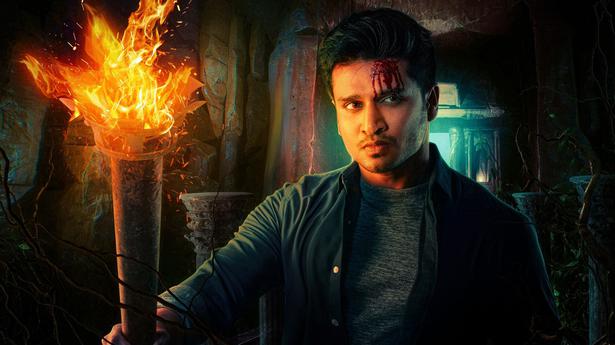 Art director and production designer, Sahi Suresh, like several other technicians in the film industry, mostly remains an unsung hero. He has completed a decade in Telugu cinema and talks with pride about his recent film Karthikeya 2, during this interview in Hyderabad . “Stories inspired by history and mythology give us the scope to do something noticeable. After the period film Kanche (2015), Karthikeya 2 has fetched me recognition.”

The makers of Karthikeya 2 claim that the film has garnered more than ₹75 crore worldwide since its release on August 13. While Pushpa – The Rise and RRR were big ticket projects that caught the attention of nationwide audiences, Karthikeya 2 is a much smaller film that has found success with its blend of history and folklore. In a situation that can be likened to The Da Vinci Code in an Indian setting, a curious turn of events makes the lead actors go in search of an anklet of Lord Krishna, looking for codes and clues along the way.

When he teamed up with director Chandoo Mondeti and cinematographer Karthik Ghattamaneni for Karthikeya (2015), he remembers all of them being on a learning curve. “It was a film made with a small budget. As a group of young people passionate about cinema, all of us in the technical team gave it our best to make the backdrop of the thriller set in against a temple town, appear distinct and different.”

They regrouped for Karthikeya 2 in mid-2020. He says this time, they had better budgets at their disposal but it was still challenging, since the scale got bigger. In addition to cinematography, Karthik took on the responsibility of editing. Suresh worked with a core team of eight to 10 in the production design and nearly 100 people were involved in constructing the sets.

Sahi Suresh (in red) and Chandoo Mondeti on the sets of ‘Karthikeya 2’
| Photo Credit: Special Arrangement

The story of Karthikeya 2 unravels in varied cities including Hyderabad, Dwarka, Beyt Dwarka, Govardhanagiri, Bundelkhand, Mathura, Radha Kund and the snow-capped peaks of Himachal Pradesh. The technical team had its task cut out, explains Suresh. “We did extensive pre-production. All the technicians had a clear idea of what was required for each shot. We did a location recce, took photographic references of the architecture, looked at videos on history, archaeology and related subjects and planned what we needed to shoot on live locations, what could be done on set and to what extent we could use visual effects.”

The team worked on the project through the pandemic, pausing during lockdowns during which they worked on the postproduction for the footage filmed until then. Suresh says it was not feasible for the entire crew to travel and stay in different cities for long durations, given the pandemic conditions and the budget. “So we filmed some of the scenes on location, recreated similar environments in sets put up at Ramoji Film City and Padmalaya Studios in Hyderabad. I think we constructed 16 or 17 sets in all. The producers (Abhishek Agarwal, T G Viswa Prasad and Vivek Kuchibotla) did not hesitate to spend on what is required for the story. Even if we needed a set for just one scene, they gave us the go ahead.” One of the cave sets
| Photo Credit: Special Arrangement

The climax inside the caves were filmed on specially constructed sets. For the sequence in which the lead actors Nikhil Siddhartha and Anupama Parameswaran drive a vehicle on thin ice, Suresh reveals it was a mix of live footage as well as miniatures: “We managed to make it look authentic and real. It was good teamwork. A few of my assistants barely slept two or three hours a day.”

Suresh discloses that a chunk of the Himachal portions were also filmed in Hyderabad, with help from the visual effects team. S S Rajamouli’s RRR set a new benchmark for cinematography and visual effects. Suresh says for films being made with much smaller budgets, it is possible to deliver a technically sound project if there is adequate time for planning and pre-production.

Suresh hails from Madanapalle, Andhra Pradesh, and made his debut as art director with the Ravi Teja-starrer Sarocharu (2012). “I have worked on more than 40 films so far. To survive in this industry, one needs to stay up to date with the technical advancements,” he says, and picks the genre-bending thriller, Awe and the NTR biopic ( NTR: Kathanayakudu, NTR: Mahanayakudu) among his noteworthy projects. His next film is the soon-to-be-released romantic drama, Aa Ammayi Gurinchi Meeku Cheppali, directed by Ingraganti Mohanakrishna. Karthikeya 3 is also in the offing. Going by the overwhelming response to Karthikeya 2, particularly the Hindi-dubbed version, Suresh says it is an added responsibility on the team to make the next film even better.