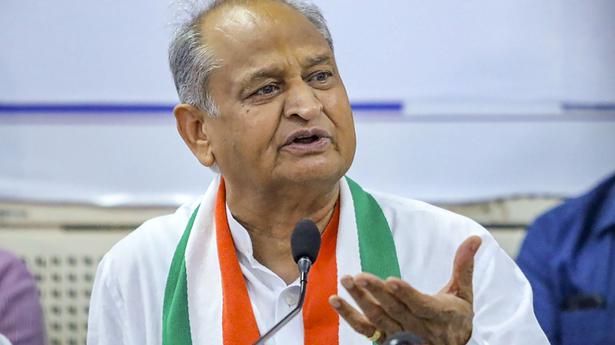 Rajasthan Chief Minister Ashok Gehlot has urged Finance Minister Nirmala Sitharaman to reconsider the move to levy GST on unbranded and pre-packed food items, asserting that the State had “vehemently” opposed the levy that “is going to hit the people hard”, in a letter sent earlier this month.

Mr. Gehlot said the State had requested the GST Council as well as its Group of Ministers (GoM), led by Karnataka Chief Minister B.S. Bommai, which proposed the tax on unbranded food items such as curd, lassi and food grains, to defer deliberations on these levies as it was “not the right time” in the aftermath of the COVID-19 pandemic.

On July 19, a day after the GST on these items kicked in, Ms. Sitharaman had said the GST Council’s decision at its meeting in late June was unanimous, with consensus from all States, and was aimed at curbing rampant tax evasion. These food items continue to remain tax-free when sold loose, she had said, a point she also emphasised in Parliament during the debate on price rise to stress that the poor would not be burdened by the tax.

In an August 5 missive to Ms. Sitharaman, Mr. Gehlot has said the upward revision in the GST rates on pre-packaged and labelled products such as buttermilk, jaggery, cereals and flour, will hit the people hard. While these items are consumed by all segments of society, even people from the lower income bracket will face increased hardship, he said.

Asking the Finance Minister to “kindly” refer to the minutes of the meetings of the GoM held in November 2021 and June 2022, the Congress-administered State’s CM wrote: “You will recall that Government of Rajasthan in all meetings of the GoM constituted for the deliberations on rate rationalisation had vehemently opposed any upward revision of tax rates. We had also requested the Council as well as GoM that in aftermath of COVID, it is not the right time for increase in tax burden and the deliberations should be deferred at least for one year.”

This stance, he added, had been reiterated at the Council’s 47th meeting in Chandigarh, but the taxes were notified by the Centre on July 13 on the basis of the Council’s recommendations. “Though the State had to issue commensurate notifications to give effect to the unified rate structure, we still are not in favour of this upward revision,” the Rajasthan CM said.

“…I would like to urge you to reconsider this revision and agenda for deliberations may again be taken up in GoMs/GST Council meeting for restoration of the tax structure that was prevailing before July 18, 2022,” Mr. Gehlot concluded.