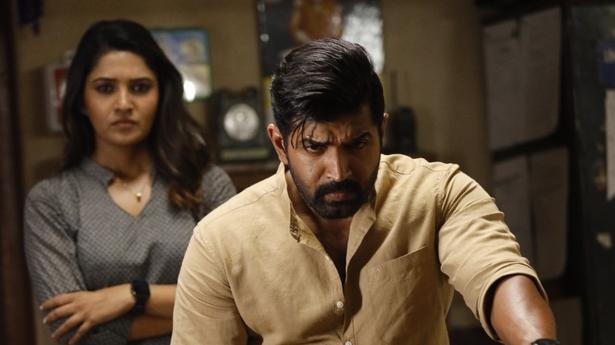 It’s no doubt that the infamous movie piracy website Tamilrockers holds a despicable place in the history of southern Indian cinema. The gang behind the infamous website was notorious for audaciously announcing their big leaks. Their notoriety was such that every time they successfully leaked a fine quality print of a new release, ‘fans’ came up with memes, some even celebrating them. Many even looked at them as Robinhood-like figures. The anonymity of this group also paved way for many conspiracy stories, with some even linking them to an international syndicate. All things considered, this is a meaty story that has the potential to make for a riveting watch. In Sony LIV’s web series Tamil Rockerz, director Arivazhagan has, as the disclaimer reads, taken the artistic liberty to make a semi-fictional tale about Tamilrockers.

Storyline: A notorious gang behind a movie piracy website threatens to leak a big star release

We are introduced to this world through a 4am show of a big star release. The film shockingly gets leaked online just minutes into the show, leading to the suicide of the film’s producer. The producers’ council now faces enormous pressure, especially since this also threatens ‘Adhiradi Star’ Adithya’s 300-crore film Garuda, which is set to release in 10 days. The threat becomes real when Tamil Rockerz announces that they will leak the film a day before the scheduled release. Facing enormous pressure from all parties concerned, DIG Sandeep Menon appoints ACP Rudra (Arun Vijay) to head a special team, consisting of cyber forensic officer Sandhya (Vani Bhojan), cyber crime SI Bhanu (Vinodhini Vaidyanathan), and inspector Nelson (Vinod Sagar), to find Tamil Rockerz and prevent Garuda from being leaked online.

First things first, to watch this series peacefully, one has to consciously let go of the need for lip-sync. Throughout its eight-episode long duration, the series has terrible lip-sync and campy sound effects that affects the viewing experience.

Now, the teleplay of Tamil Rockerz is set up in a way that the day before the film’s release, when the leak is set to happen, is the ‘ticking time bomb’. However, there hardly comes a moment where we actually feel the suspense or the urgency, despite the story showing enormous potential for the same. In a baffling move, the makers even unmask the culprits — the members of the mysterious group — in the second episode and hence it doesn’t become a whodunnit as well. In fact, even the backstory of how and why the Tamil Rockerz came to be is predictable.

The biggest issue with the series, however, is in how the protagonist Rudra is written and how the series weaves his arc. The very introduction scene of Rudra is a wreck. The scene is aimed to show how ruthless Rudra is that he even goes out of line to secure justice. A heartbroken rogue cop heading a mission is not new to cinema and the backstory of what made them who they are is usually reserved for an emotional payoff later. Not in Tamil Rockerz, unfortunately. Rudra suffers a terrible loss and there is no attempt to withhold any information from the audience.

Having shown it all, the series goes on to juxtapose the investigation narrative with scenes from Rudra’s backstory despite already telling us its fate. This apparent tool to make us feel for the cop, and the way it is employed here, begs the question if it is necessary for the cop’s pathos to have a link with the central conflict. Why can’t a cop — just any cop — be heading this case? Isn’t the plight of the victims for whom the series stands for enough to motivate a cop to work for it?

The series also suffers in how some scenes, even when written well, are placed. For instance, MS Bhaskar appears in one of the most touching, heartbreaking scenes in the entire series. As always, Bhaskar brings his A-game to the fore but the placement and the convenience in how the idea is brought in makes even its noble intent feel force-fed.

All the above would have mattered lesser had the central narrative of the series, the investigation into the Tamil Rockerz group, been engaging. Blame all the notions and theories that exist in the public consciousness about the group, the version of the story that Arivazhagan chooses to say is rather bland for screen. Of course, one really can’t help if the reality of an event doesn’t make for a great cinematic story. However, even if given this benefit of the doubt, nothing can save the terrible writing of Rudra’s investigation which lacks any high points. In fact, this is an Assistant Commissioner of Police who even while chasing a major culprit doesn’t ever call for backup. And for a story of a group that is touted to have international links, the deepest it goes technologically is to say how deleted files in a pen drive can be recovered.

It’s unfortunate that this series offers little payback for Arun Vijay, who has given his best. Moreover, even if the intention of the makers comes from the right place, how do you take a series seriously when, in its world, a film producer, director and even the actor’s father calls the star ‘Adhiradi Star Adithya’? With the series hinting at a second season, all one can do is hope that it manages to redeem itself.