Updated MG Hector to launch in India this festive season 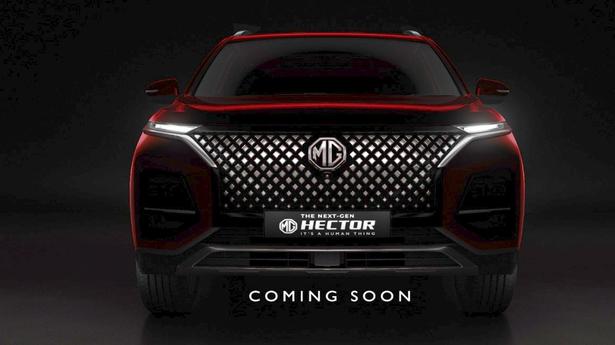 
MG is set to launch the updated MG Hector in India this festive season. After releasing the teaser for the 14-inch touchscreen infotainment system, MG has now shown the front end of the updated SUV.

The new teaser image shows a revised front end with a large ‘Argyle-inspired’ diamond-mesh grille with prominent chrome surrounds at the top. Spy photos of the updated Hector that surfaced recently give additional cues about the updated SUV’s design, hinting at restyled front bumpers and tweaked headlights.

Going by the images, the updated Hector will retain the alloy wheel design of the existing model.

On the inside, the biggest change will be the new 14-inch touchscreen infotainment system, the largest in any car sold in India so far. The previous teaser image from MG also shows a revised dashboard design with new horizontal AC vents, and a centre console that gets a new flowing design, with a new gear lever.

Changes to the new Hector go beyond the cosmetic updates and the 14-inch to﻿uchscreen. Like its stablemates — the Gloster, Astor and ZS EV — the updated Hector will get Advanced Driver Assistance Systems (ADAS). This means, it will be kitted out with active safety features like lane keep assist, blind spot detection, rear cross-traffic alert, forward collision warning and lane departure warning. It is likely that the refreshed SUV will house the ADAS sensors and cameras on the windscreen.

However, no changes are expected to the powertrain options. The Hector facelift will continue with two 143hp, 1.5-litre petrol engines — one with mild-hybrid technology — and a 170hp, 2.0-litre, turbo-diesel unit.

As we had reported before, the MG Hector facelift will sit above the current model. The updated Hector is likely to be priced around Rs 1.5 lakh-2 lakh more than the current model. A similar update will eventually be rolled out to the Hector Plus as well.