Lamborghini Huracan Tecnica to roll out 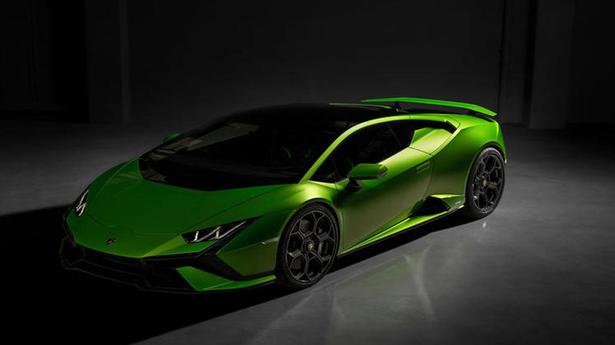 
The Lamborghini Huracan Tecnica — globally unveiled in April this year — will be launched in India on August 25. The Huracan Tecnica slots between the standard Huracan Evo and the track-focused STO version, both of which are already on sale in the Indian market

The Huracan Tecnica is making it to India just five months after its global unveil, a remarkable feat for such a high-end supercar. In fact, Lamborghini confirms that customer orders have already been coming in.

The carmaker has been on a success spree of late in India, having delivered the 200th unit of the Urus recently. Sharad Agarwal, head of Lamborghini India, says, “Urus has been driving sales for the company’s super-sports cars, which could explain the prompt interest in the Tecnica.”

The mechanical underpinnings are the same as on the STO — 640hp, 5.2-litre naturally aspirated V10 engine sending power only to the rear wheels through a 7-speed dual-clutch automatic gearbox. It, however, skips on the wild aerodynamics package and weight-saving regime of the more hardcore STO.

Instead, the Huracan Tecnica draws its design inspiration from the Sian hybrid hypercar, which in turn is based on the Aventador. The front and rear fascia get similar angular bodywork as the Sian; there is a more prominent diffuser at the rear as compared to the Evo, and it also features a fixed rear spoiler.

It gets rear-wheel steering and carbon ceramic brakes as standard, with a carbon-fibre bonnet. As for outright performance, 0-100kph is dispatched in a claimed 3.2sec, 200kph comes up in 9.1sec, and it has a top speed of 325kph.

Being a direct rival to the Porsche 911 GT3, Lamborghini says driver involvement is the single most important element in the Tecnica’s character, with genuinely approachable on-the-limit handling being the priority.

In terms of price, the Huracan Tecnica will be positioned below the Huracan STO which was launched in India at ₹4.99 crore (ex-showroom) earlier this year.